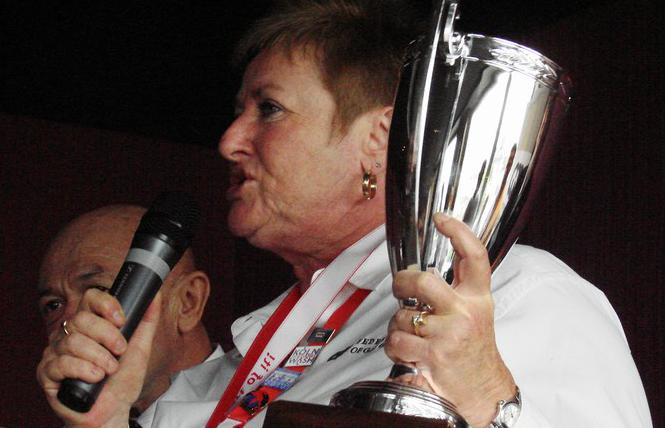 I spent the last week of June in the hospital at UCSF. At the beginning of the week I was given a kidney to replace my failed renal organs and had a heart attack while being treated. At the end of the week, as I was being released, I was told I was a finalist for the highest volunteer award presented every four years by the Gay Games.

Now, that was one hell of a week.

There are three female and three male finalists for the Tom Waddell Award, given to one man and one woman every four years at the quadrennial Gay Games. The award is in recognition of extraordinary volunteerism that advances the Gay Games mission. The board of the Federation of Gay Games will vote on the honorees this weekend.

I have never worked personally with McMullin, whose connection with the Gay Games is primarily through her efforts as one of the original volunteers with the Names Project AIDS Memorial Quilt and supplying the FGG's Memorial Run with its AIDS quilt panels. She has been a tireless and devoted activist and advocate, providing support throughout the fight against AIDS, running a program to provide unused medications to those who needed them most, arranging for housing, and helping organize civil protests.

It's been my privilege to work with the others, getting a chance to see them in action.

Galetti was one of the key leaders who saw the FGG through its two biggest existential crises: first, in the late 1990s when the entire executive committee resigned because its surprise proposal to overhaul the entire organization failed to pass; then, in 2003, when Montreal organizers walked away from two years of negotiations and announced that instead of hosting Gay Games VII in 2006, they would hold their own rival event in a blatant attempt to co-opt the mission.

She is also a co-founder and longtime president of the International Association of Gay and Lesbian Martial Artists, which organizes the martial arts competition at Gay Games.

When the executive committee resigned en masse, the FGG was suddenly on the edge of chaos as it no longer had the officers required by its bylaws.

"Teresa and I put up the $1,200 to hire some nonprofit lawyer in San Francisco to fight the action, which clearly violated California nonprofit law," 2014 Waddell Award winner Gene Dermody said. The two teamed up again to persuade the FGG to adopt documents laying out the requirements for each sport a host offered and for compiling observations and suggestions by past hosts for future hosts.

The second crisis came with the creation of the Outgames in 2003. Fundamental flaws in the structure the former executive committee said existed were being exposed by the organization's inefficiency and unpleasant internal culture. The Strategic Planning Committee, on which Galetti sat, was tasked with finding a solution.

Oostenbrug, a longtime organizer with Team Chicago and a leader in the FGG scholarship program, was a chairman of strategic planning but found himself being stretched thin. The FGG leadership then did something rather unusual. I had just joined the FGG as a delegate from Wrestlers WithOut Borders, and brought with me a journalism career built on research, analysis, and communications. Service requirements for both the planning committee and for host relations committee were waived and I was asked to join both groups - becoming a co-chair of strategic planning. And thus the team of Oostenbrug and Brigham was born.

We brought in consultants, conducted surveys, and built a plan for what we needed. Pretty much the same thing the executive committee had disastrously done the previous decade. We then worked to change the outcome.

Oostenbrug handled day-to-day operations, kept the meetings organized, and kept people civil when we were on the brink of hostilities. I drew up the structural plan, then orchestrated a series of membership communications, keeping everyone abreast of development and always documenting how each proposed change stemmed directly from the membership mandate they had given us. When a full membership meeting was held on the issue, Oostenbrug handled 90 percent of the questions, while I sat to the side, jumping up to respond every time an obstructionist lobbed a hostile rile-'em-up question. The idea was to defuse tension by having me lure the attention away from the main issue.

It worked. In the end, we got the reorganization through in three years with nary a dissent.
Oostenbrug stayed on with the new board to help see it through and continued to work on scholarships. I left for other volunteer work but remained as a journalistic watchdog, calling the Gay Games out on issues such as drug testing and its negotiations with Outgames, and then in 2011 founded Equality Coaching Alliance, a network of more than 500 LGBT coaches, as part of my Gay Games outreach work.

Moews' resume is a geographical marvel. The German native's engineering work has taken him around Germany, then to Poland, Hungary, and Turkey, and now to Bulgaria. Seems everywhere he goes he helps organize a tournament or an LGBT sports club, from Sport Club Janus in Cologne to the European Gay and Lesbian Sport Federation, to more clubs in Bonn, Brussels, Oslo, and, now, Bulgaria. Trained as a gymnast, he has competed in and organized numerous volleyball tournaments.

"He was the driving force that professionalized the operations of these sports organizations that were representatives to the FGG and EGLSF," Dermody said. "His rejection of the EGLSF with the rise of this pro-GLISA EGLSF agenda, was exceptionally correct at a very early time."

Rowe frequently shows up at Gay Games host cities well in advance of the events to help prepare the tricky logistics for cycling and triathlon. She reorganized the FGG's ambassador program as well as its awards program. She has also served as a delegate from Team Sydney.

Pride track meet this weekend
The San Francisco Pride Track and Field Meet will be held Saturday, July 5, at Chabot College in Hayward. Usually the meet is held at Cox Stadium in San Francisco but was moved this year because of arena maintenance work.

The meet will kick off with a 5,000-meter run at 9 a.m. Registration is currently available online at http://www.pridemeet.org for $55 and will be available on site the day of the meet for $65.

The meet is organized by San Francisco Track and Field Club. For information on the club, visit http://sftrackandfield.com/.