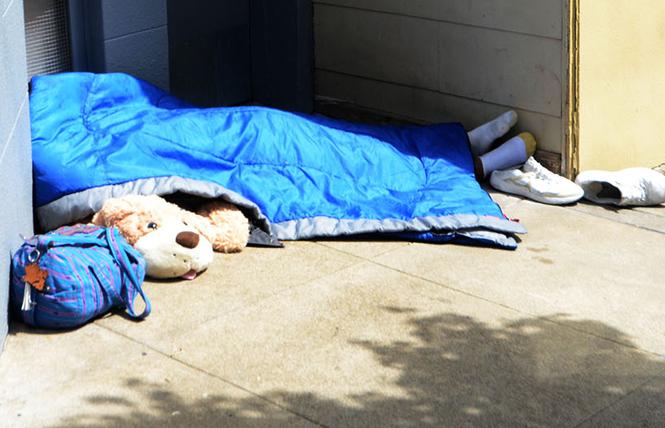 A man slept on a sidewalk in the Castro district in April. Photo: Rick Gerharter

A community-driven homeless outreach program in the Castro is planning to relaunch this summer in an effort to provide more targeted assistance to individuals living on the streets in San Francisco's gay neighborhood.

Known as Castro Cares, the initiative first launched in the fall of 2014. It is a joint effort by the Castro/Upper Market Community Benefit District and a number of other Castro-based neighborhood groups.

It had hired members of San Francisco's Homeless Outreach Team to engage with homeless individuals several times a week along the upper Market Street corridor. As they did, they offered the people they encountered a wide array of services, from handing out free pairs of clean socks to arranging for medical care or a shelter bed to stay in for the night.

But as the Bay Area Reporter reported last June, just 20 individuals over a 33-month period had utilized a shelter bed reservation made for them by the HOT team. Castro Cares officials reasoned the low usage rate was largely due to the individuals having to arrange their own transport to the shelter later that day.

Last June 30, at the end of the city's fiscal year, the Castro Cares initiative ended the HOT team outreach. Its organizers then spent several months researching how to revamp it in order for it to have a greater impact.

"We came to the conclusion we should really try to do some kind of outreach and case management that is more intensive rather than just generally trying to reach a lot of people with a 'Hi, how are you?' wellness check," explained CBD Executive Director Andrea Aiello. 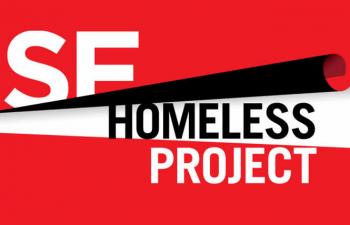 To achieve that goal, Castro Cares has teamed with the San Francisco AIDS Foundation to hire a temporary health educator to work 20 hours a week at varied times on different days and nights reaching out to homeless individuals in the neighborhood. The person would be part of SFAF's substance use program known as the Stonewall Project and be based out of the agency's Strut men's health center located at 470 Castro Street.

Rather than talking to as many people as possible, the hope is the person will be able to form closer relationships with homeless individuals who call the Castro home. In the case of a person expressing interest in being housed at a shelter, the health educator would help them travel there, or they could bring them to get a state ID so they can access various social services.

The health educator could also take the people they meet to have a cup of coffee and learn more about the issues they are facing that led to their being on the streets.

"They would help people who are in a place where they are maybe interested in getting help," said Aiello.

SFAF did not respond to a request for comment by the B.A.R.'s press time Wednesday. Aiello said they approached SFAF to collaborate on the program since the nonprofit agency has the capacity and experience to provide professional supervision to the health educator.

The hope is to see the position be filled and begin work by the end of July. The hiring notice was recently posted by SFAF, meanwhile the CBD is working to finalize a contract with the city's Office of Economic and Workforce Development since funding is partially coming from a $125,000 city grant.

"We are really excited," said Aiello. "We can't wait until they start."

The salary for the half-time position and operating expenses for the program is expected to cost $64,000 over the next 12 months. Within six months, Aiello said they plan to evaluate how the program's new focus is working out.

The earlier iteration of Castro Cares showed the need is there. Between mid-September of 2014 and the end of June last year, the HOT team encountered 4,306 people, 63 percent of whom engaged with them in some manner.

The overwhelming majority were men (79 percent) between the ages of 20 and 39. Of the 618 people asked about their sexual orientation, 38 percent were straight, 15.5 percent were gay or lesbian, 3 percent were bisexual, and 2 percent were questioning or unsure.

This time out the program's success will be evaluated on different measures than how many people engage with the health educator. Rather, it will be judged on the outcomes individuals set for themselves, such as reducing the number of times they inject drugs or use dirty needles, or sought a bed in a city shelter.

"Whatever it is for them. They will have their own goals," explained Aiello.

To learn more about the Castro Cares initiative, visit its website at http://www.castrocares.org/.