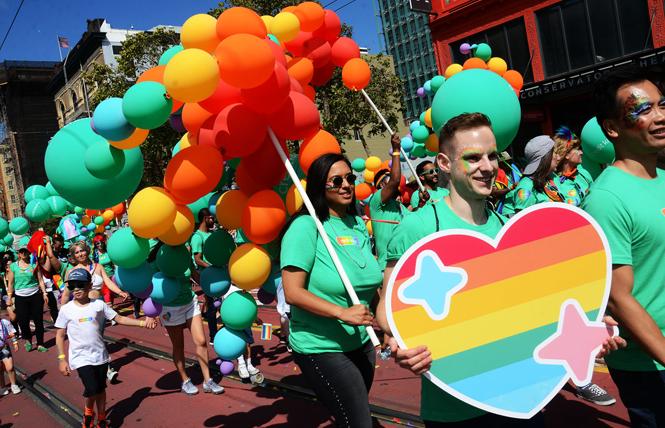 After weeks of heartbreaking news involving the Trump administration's immigration strategy of childhood separations and zero tolerance at the southern U.S. border, a jubilant afternoon in San Francisco reminded thousands of people there's hope - and strength - in numbers.

More than one million people attended the parade that began near the Embarcadero at 10:30 a.m. and lasted about six hours, according to CBS5, which livestreamed the event. Over 240 contingents paraded along Market Street spilling into the Civic Center Pride festival.

Dykes on Bikes led the procession of floats, groups, and other participants, including a shiny appearance by the Golden State Warriors' newest NBA championship trophy.

As one of the Pride parade judges who honored the LGBTQ+ youth leading the campaign to end America's gun violence epidemic, Sister Merry Peter offered an emailed statement to the Bay Area Reporter after the weekend's festivities.

"It was a wonderful parade full of joy, energy, and resistance showing that our communities are united, ready to fight for our rights and the rights of others," Sister Merry said. "'Generations of Strength' reminds us we have faced oppression before and that when we come together in common cause, we are unstoppable. 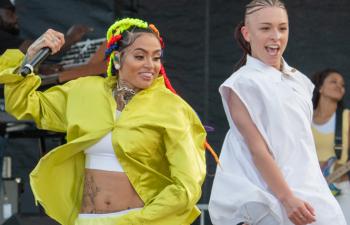 "So many signs called out the scandal of taking children from their families and the border, said Black Lives Matter, spoke up for trans rights and women's health, and to end gun violence, especially violence targeted at LGBTQ+ youth and youth of color," Sister Merry continued.

Thousands of crafted signs made statements of love and political action. A scant few included: "More nice, less ICE," "No Human Is Illegal," "Families belong together," and "It was never about cake," calling out the Colorado battle over a baker's refusal to make a same-sex wedding cake, citing freedom of religious and artistic expression. (The U.S. Supreme Court earlier this month ruled in favor of the baker, citing hostility on the part of a Colorado commission.)

In reference to opposing male circumcision, a man donning white pants with a faux blood-stained groin area held the sign "His Body, His Choice." 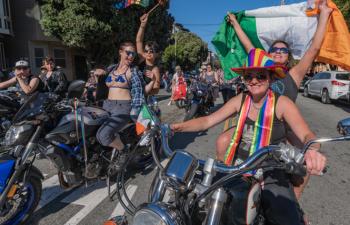 San Francisco Pride is one of the largest events in California and first time spectator Alexandra Covington, 34, traveled from Los Angeles to celebrate.

Covington, who identifies as a straight ally, said while the Pride parade "is founded on queerness, that's only a starting point.

"Right now, people need to feel good about themselves and their community because there are so many reasons to lose faith," Covington continued. "Sometimes, with politics, you think that everybody's corrupt, but when it comes down to the people level, people are wonderful." 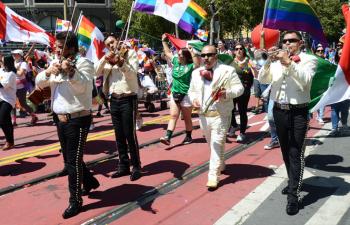 A mariachi band marched with various consulates, including Mexico and Canada, in the San Francisco Pride parade. Photo: Rick Gerharter

A contingent carrying international flags, particularly Mexico at the moment of the interview, was met with chants from the crowd. "Mexico! Mexico! Mexico!" began a group behind Covington. The parade participants shouted back as they continued along Market Street, "Mexico! Mexico!"

"There have been several times where I started getting teary eyed and I wanted to start crying right now," she said. "That's Pride in the face of oppression. There's so much negativity, and pride is just pure positivity."

Pride in rainbows
Since the late Gilbert Baker - and his friends Lynn Segerblom and the late James McNamara - first unfurled the rainbow flag 40 years ago during San Francisco Pride, countless corporations have put their spin on the iconic LGBTQ symbol.

This year, Nordstrom, Macy's, Twitter, Facebook, Google, Uber and a multitude of other big businesses sent floats and festival flare through the parade.

Apple's contingent, complete with gay CEO Tim Cook, was estimated to have nearly 1,000 participants and Kaiser Permanente, too, was "1000-plus strong" according to Twitter.

Cheering along the parade route with a vibrant purple Levi's balloon more than twice her size was 7-year-old Aalyah, who shared with the B.A.R. why Pride was important to her.

"I like how [the] sponsors and stores [are places] you can go to to buy stuff that can support you and what you're going through," the Hayward resident, who did not give her last name, said, adding an experience she had with a classmate recently.

"[Pride] is inspiring to me because when we're celebrating the holiday at school, my friend was talking about gay and trans," Aalyah said. "I have two aunts who are gay, and she has two uncles who are gay. Other people make fun of us for it, but not everyone bullies people who are gay and trans." 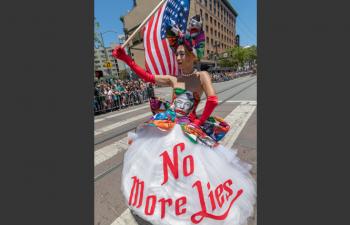 "I'm pansexual and feel amazing," Gillaspie said. "It's great that [Pride] brings us all together. The Trump administration is bringing us apart. Growing up in Gen Z with all the LGBTQ support, it's great to come to this. I'm going to the Navy soon in Illinois and they're not super out there with Pride yet."

As one of the top five biggest crowds in America, San Francisco Pride is the sole LGBTQ event with the top rank in any state, according to Genfare (https://www.genfare.com/resources/largest-events-state/). New York City's New Year's Eve celebration in Times Square is the most attended event in America with more than two million annual attendees.

Jim Gebbie, 76, has lived in San Francisco since 1970 and imagines he's been to "at least half" of the Pride [celebrations].

"I went to the first one in 1972," said the gay Diamond Heights resident, shouting over enthusiastic onlookers. Sylvester's classic "You Make Me Feel (Mighty Real)" blasted through the speakers of a passing contingent.

(According to Wikipedia, there was a small gathering in 1970, but a parade has been held annually since 1972.)

"When same-sex marriage was accepted there was a huge turnout, too. Since Trump has been so anti-gay, the LGBT community has to stick together," Gebbie added. "This, too, shall pass."