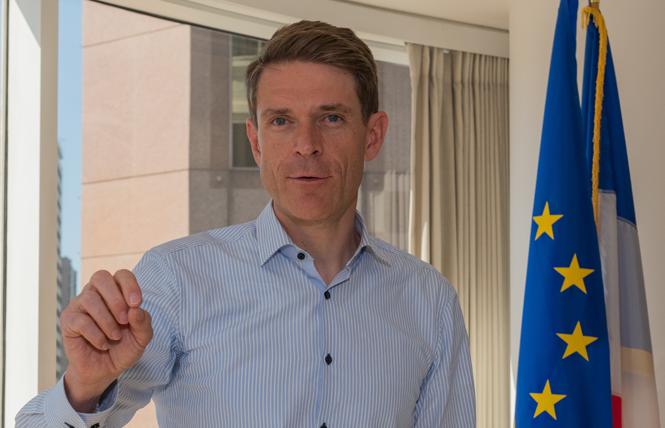 France will show its pride in San Francisco this weekend.

The gay consul general of the French Consulate of the Northwest, Emmanuel Lebrun-Damiens, will be present at multiple events, including along the parade route down Market Street.

French Minister of Gender Equality Marlène Schiappa will also be in attendance.

Lebrun-Damiens, 41, and Schiappa, 35, will also join gay German Consular of the Pacific Northwest Hans-Ulrich Suedbeck, who will speak at the pink triangle ceremony atop Twin Peaks Saturday, June 23.

Lebrun-Damiens sat down with the Bay Area Reporter at the French Consulate in San Francisco earlier this month. He discussed French influence in the San Francisco Bay Area, his work on HIV/AIDS in Africa and Asia, LGBT rights in France and at the United Nations, and participating at Gay Games X in Paris in August.

The diplomat, who began his position at the consulate in May 2016, was quick to mention French contributions to technology and biotechnology throughout his jurisdiction, especially in the Bay Area, as well as French art and culture's imprint on San Francisco.

There are about 60,000 French nationals throughout northern California and Nevada, the Pacific Northwest, the northern Rocky Mountains, and up to Alaska and as far as Guam, the area overseen by the consulate. He and his team manage French visas, and work to promote French commerce and technology, French language education in the United States, and French culture.

Connecting Americans and the French to exchange ideas and experiences excites him.

"We learn from each other," he said. "The more I can put in touch French and American authorities or organizations on these topics, the better. That makes our job so interesting."

Gay Games
Lebrun-Damiens, who loves cycling, has switched sports to participate in Gay Games X. He has been training to run the half-marathon through Paris.

"I'm training especially hard for it because ... running is not where I'm the best," he said.

He couldn't participate in the cycling event due to his schedule and switched his focus to running.

"Here, it's wonderful biking in the San Francisco area," he said. "It's cool here to see so many bikers."

Regarding the upcoming Gay Games, Lebrun-Damiens said he's proud of the way the sporting event not only brings together amateur athletes from around the world, but also how it promotes diplomacy by the games being hosted in different countries every four years.

Tens of thousands of LGBT athletes and their supporters are expected to attend the Paris games. The first few days before the opening ceremonies are devoted to a human rights conference.

France decriminalized homosexuality long ago, in 1791, but the country had its own dark period during World War II under the regime of Marchal Philippe Petain. French LGBTs suffered under Petain's anti-gay policies and for decades following the 1940s, when the French police maintained records on LGBT citizens and businesses, which continued into the early 1980s. The police used the records to discriminate against and harass France's queer citizens, said Lebrun-Damiens. Yet, homosexuality was never recriminalized in the country. Police never could arrest someone simply for being gay.

France has since returned to its roots, embracing its LGBT community and fighting for LGBT rights, he explained. Today, France is a better place than when he grew up in the French countryside and was bullied as a child.

He had no recourse. Today's queer youth have the law on their side. There are serious charges, even for hate speech. The government supports education about LGBT people in schools with grants and funds LGBT events, such as the Gay Games. France has same-sex marriage and allows transgender individuals to determine their gender. The government pays for gender confirmation surgery.

"Paris and San Francisco went through the same horrible times because these are the two cities where I think the disease appeared first," he said.

However, French scientists lobbied the government hard to identify the real causes of the disease and how to fight it, particularly among vulnerable populations, such as gay men.

"So, very quickly all these stigmas were, I mean very quickly, the government fought or made campaigns to eradicate the stigma against people living with HIV," said Lebrun-Damiens, who worked with Nobel Prize-winning Francoise Barre-Sinoussi, one of the virologists who discovered and named the HIV/AIDS virus.

"There is still today stigma against people living with HIV everywhere in the world, and we need to work on that," he said.

Due in part to Lebrun-Damiens' efforts, France was the second contributor to the Global Fund against HIV/AIDS. At the U.N., on behalf of the European Union and France, he pushed a resolution to combat the spread of HIV/AIDS by getting a commitment from 194 countries to contribute to funding the fight, targeting at-risk communities such as gay men and sex workers.

One of the proudest moments in his career was helping an African nation reduce HIV transmission. He started by convincing leaders that by recognizing gay rights or the gay community, even while the country still criminalized homosexuality, it would improve the situation. France helped fund the government campaigns that partnered with LGBT organizations where gay men went into the underground clubs giving out condoms and educating people about HIV/AIDS. The number of transmissions dropped, as he predicted.

"That was magic. That was wonderful," said Lebrun-Damiens, who wouldn't identify which African nation he worked in.

"I really loved working on that, and then, at the United Nations as well, when we were a core group of countries who wanted to persuade countries who still criminalized homosexuality just to drop these laws," he said.

Back in France
"When you think in terms of rights in 40 years, where we've come from, what we've done, that's pretty amazing," said Lebrun-Damiens. "Now, I'd say that in France we have equal rights."

That doesn't mean everything is perfect.

"What we need to still improve is [fighting] homophobic acts," he said.

Hate crimes have risen 20 percent, according to SOS Homophobie, a French LGBT organization that reported documented hate crimes in 2016 in an article published by Human Rights Watch in May 2017.

He believes the figures increased partially due to the French government creating a hotline, making it much easier to report hate crimes. Additionally, the interior ministry started maintaining records of homophobic-based crimes registered by the police.

Breaking down the hate crime statistics, he noted there was an increase of hate speech in 2016 and 2017, which SOS Homophobie noted in its report. Physical violence against LGBT people was up, but it was only 5 percent, he said.

He believes that the reason for the increase could be that some people feel more open and daring to say what they believe, and some victims feel more comfortable reporting hate crimes.
Lebrun-Damiens also said that hate speech goes beyond the LGBT community and includes racism and anti-Semitism.

"We have to take these very seriously, and the government does," he said. The laws are a "good thing, but we need to do more."

Continuing the fight
To combat anti-gay issues in France, the country implemented a national plan against homophobia, which is under the purview of Frederick Potier. He was appointed last May by President Emmanuel Macron to the new interministerial delegation to the fight against racism, anti-Semitism, and anti-LGBT hate.

"I think homophobia is deeply rooted - has always been deeply rooted - in our society as in any society in the world. You don't get rid of hundreds of years of homophobia like this," Lebrun-Damiens said, slapping his hand on the table.

"I think you need to look at this [from a] long perspective and you need to find the best and higher impact programs to answer this worrying trend," he added.

He immediately dismissed the uptick in hate crimes being attributed to the influx of refugees into Europe. When the B.A.R. asked if France was doing anything to help LGBT refugees, he said no.

"It has to be looked at as something which is in our culture that we need to get rid of," he said about homophobia.

Having government leaders dedicated to combatting homophobia and hatred toward other communities, "it shows that there's still work to do, but we are almost there in terms of equal rights," he said.

Lebrun-Damiens believes eradicating homophobia and other issues facing the LGBT community is possible.

"We need to fight for equal rights everywhere, but diplomacy counts, and I'm very proud to be of a country, to be a French diplomat, of a country that was one of the leaders," in global LGBT rights, he said.