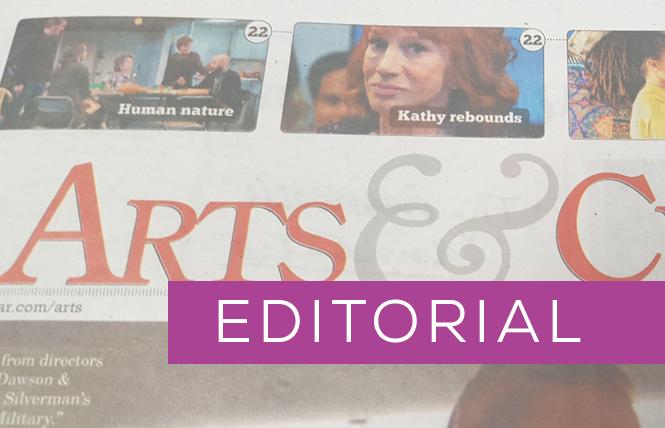 The Bay Area Reporter's arts section blew it last week with a transphobic review of "Man Made," a documentary about transgender male bodybuilders. We quickly heard the criticism, but acted too slowly and too passively to update the online version of the story, which we regret. The paper's editorial policy has long been to use names and pronouns that people prefer, and in their reviews, our critics will strive to keep their misplaced musings out, especially if they are not experts in the field of gender identity. That's what led to last week's unfortunate word choice by reviewer Erin Blackwell when she wrote that the male bodybuilders featured in the film "were women when they decided to become men, so they are in fact 'women made.'" It was inaccurate, insensitive, and transphobic, and the online version of her review has been re-edited.

It's not lost on us that this error occurred in the middle of Pride Month, and there is no "good time" for these mistakes to happen, as we wrote in an editorial several months ago ["We screwed up," February 1] about a similar issue involving a trans person who was deadnamed in a news article - publishing the person's old name instead of the one with which they identify.

It's hard enough for LGBTQ people to be portrayed accurately in the mainstream media; when the gay press screws up, it's even worse. We have heard the outrage loud and clear from readers who have eviscerated us online, in emails, and in phone messages.

We are taking steps going forward to ensure that this does not happen again.

First, we will provide all writers with guidelines on covering trans issues, such as avoiding generalizations and assumptions based on, for example, a film title. It is not our job to presume someone's gender identity, or to write about it in a flippant way. We are and strive to be better than that.

Second, we will ensure our editors know when and how to edit such offending language and assumptions. Both of our recent mistakes could have been avoided if editors had paid closer attention while editing the draft articles.

Finally, we will act quicker to correct these lapses in judgment. The film review should have been corrected as soon as editor Roberto Friedman heard about it last Friday, not three days later.

This transparency is important to us. And this remains as true today as it was a few months ago: We will be transparent when we fall short. We regularly criticize others when they get it wrong, you deserve to hear from us when we do too.

We pride ourselves on our staff's professionalism. Many have been with the paper for decades, including transgender writers and advisers. Yet, it just takes one mistake to chip away at our good will and respect in the community.

We will do better.

Apologia for a transgression
Bay Area Reporter film reviewer Erin Blackwell issued the following statement, which has been edited for space.

Never has one of my articles attracted so much impassioned attention in 25 years of writing for the Bay Area Reporter. The fallout from my review of T Cooper's "Man Made" was designed to confront me with my own personal unresolved inner conflicts. I want to thank everyone who took time to complain about the rough ride I gave not so much the film as an aesthetic entity as the real people whose lives are on raw display fleetingly but intimately - and, by extension, the entire trans community. Mea culpa. I'm sorry.

Director T Cooper voiced his displeasure with my review by calling me transphobic.

When I read Cooper's remarks, I requested an interview through his publicist, which was declined. I turned to my trans roommate to walk me through the error of my ways. As a nonbinary trans person, they succinctly parsed the verbiage. Where I had written "biological women bodybuilders rejecting natural bodies," I should have written, "bodybuilders assigned female at birth reclaiming their bodies to reflect their gender identity." I had used obsolete terms betraying an essentialist mindset, even though I was trained by French feminists to reject essentialism. I was mortified.

Further, my roommate reminded me, "Sex is a spectrum," as established by Magnus Hirschfeld, the pioneering Berlin sexologist, over 100 years ago. This is one of my favorite scientifically proven facts, as I have never personally been an avatar of femininity.