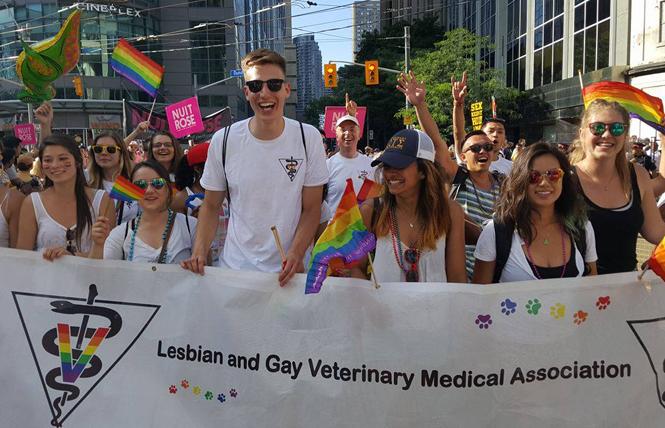 A group of LGBT veterinarians will march with Pride this Sunday, under a new name.

Pride Veterinary Medical Community, formerly known as the Lesbian and Gay Veterinary Medical Association, will have a contingent in the parade. Since 1992 the organization has "created community while advocating for LGBT veterinarians, veterinary students, veterinary technicians, and clients," according to co-founder Dr. Ken Gorczyca, who currently volunteers on the board.

"We surveyed our membership, and especially the younger members wanted a more inclusive name," Gorczyca told the Bay Area Reporter. "We also wanted to get away from the alphabet name. We are excited about our new name, as it is inclusive, and is open to people of all sexual orientations, gender identities, expressions, and our allies."

The organization's roots date back to 1977, when several gay veterinarians met for a dinner party during the American Veterinary Medical Association conference. They wondered how many other gay veterinarians were out there.

AG Vets disbanded in 1988 when the AIDS epidemic sent many veterinarians back into the closet due to the stigma of the disease.

"At the same time, the AIDS pandemic brought lesbian and gay veterinarians together on the front lines of activism while advocating for their friends, clients, and family members with AIDS," said Gorczyca. "Veterinarians were founding members of organizations like Pets Are Wonderful Support in San Francisco and PETS DC in Washington, D.C., as well as many others across the country."

The Lesbian and Gay Veterinary Medical Association was formed in 1992.

Now known as Pride Veterinary Medical Community, the organization has about 500 members.

"It's a far more diverse organization than it was 25 years ago," Gorczyca noted. "We have two trans men on the Pride VMC board and seven women. There is generation and gender change occurring in the veterinary profession and this is reflected on our current board."

"Most funding goes toward supporting lectures and networking events at veterinary conferences and to student scholarships and grants," Gorczyca said.

The membership was excited to be marching in this year's parade.

"We do not have a float, but our members will be marching with their canine companions, some of which will be dressed up for the festivities," said Gorczyca. "Historically, LGVMA members have marched with the PAWS contingent. Recently, our members have marched in the Toronto Pride parade, and with our sister group in Great Britain, British Veterinary LGBT+, which marches in London pride, and the Australia Veterinary LGBTQIIA celebration at Sydney Mardi Gras."

In addition to participating in the Pride parade, Pride VMC will also be sponsoring some events at the Pacific Veterinary Conference June 28-29. Local vets Dr. Dane Whitaker will be speaking on well-being and stressors, while Dr. Sandy Hazanow will moderate a panel discussion on LGBTQ-friendly practices. Pride VMC will also be sponsoring an evening networking event June 28 at the Lookout.