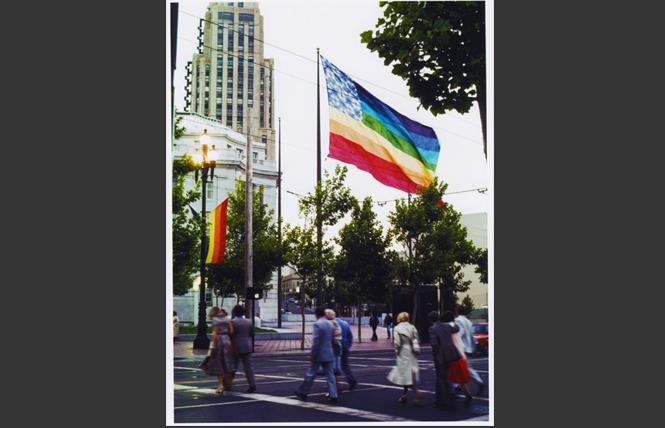 The estate of Gilbert Baker is pushing back against claims that he is not the sole creator of the original rainbow flag.

It has released excerpts from Baker's unpublished memoir to back up its contention that the initial idea to create a rainbow-colored flag for the 1978 Pride parade and celebration in San Francisco came from Baker alone.

While the estate does not refute that Baker, who died last year at the age of 65, had assistance in stitching together the first rainbow flags created 40 years ago, it does take issue with anyone claiming that he shares credit for coming up with the design.

"We, as keepers of the flame so to speak, we do have a duty to correct the story when we think there are mistakes or when people say, 'To have flags was my idea,' or, 'The rainbow was my idea.' We feel necessary to defend Gilbert's legacy," said Charles Beal, manager of creative projects for Baker's estate, in a recent phone interview with the Bay Area Reporter. "We are upset this is happening a year after Gilbert died."

Beal said the estate was responding to claims made by Lynn Segerblom in a first-person account she wrote for the Los Angeles Blade in March and in an interview with the B.A.R. this spring in which she claimed to have come up with the idea for making the 1978 flags rainbow patterned and sought credit as a co-creator of the first flags.

"We are happy she is going to have a day in the sun. We do have to object when there are factual differences about the creation of the rainbow flag from what she is saying and what Gilbert wrote," said Beal.

Segerblom doesn't deny that it was Baker who was instrumental in turning the rainbow flag into a global symbol for LGBT people. But she does contend that the first such flags were collaboratively designed and made by herself, Baker, and their friend James McNamara, who died of AIDS in 1999.

"It really is a three person, not a one person, flag making. Everybody played their part and then some," Segerblom, 61, who is straight and lives in Torrance, southwest of Los Angeles, had told the B.A.R. earlier this year.

Known then as Faerie Argyle Rainbow, Segerblom befriended Baker and McNamara in the mid-1970s. With Baker, she co-chaired the decorations committee for the 1978 Pride parade.

They were tasked with designing flags to fly on the various flagpoles in the city's Civic Center Plaza in front of City Hall where the parade ended and a rally and celebration were held. They also set out to create larger flags for two flagpoles in the adjacent United Nations Plaza fronting the Market Street entrance into the area.

As Segerblom wrote in her first-person account in the Blade, she and McNamara volunteered to design the flags for the two larger flagpoles, while other artists were selected to create smaller flags to be flown around the reflecting pool.

"Now, what to put on them? I'm sure we all had a meeting about this, but I was 'the Rainbow Faerie' so I wanted them to be rainbow colored flags. We all agreed," wrote Segerblom.

In her written account and interview with the B.A.R., Segerblom said she chose the eight colors that made up the first flag: pink, red, orange, yellow, green, aqua, royal blue, and violet.

"I wanted it to be a full rainbow, not like a quasi rainbow," said Segerblom, who also opted to include a corner section with stars to mimic the design of the American flag.

But in an excerpt from Baker's memoir that his estate published on the website https://gilbertbaker.com/ - with permission from the New York City-based literary agency Sterling Lord Literistic - Baker wrote that he was inspired by the American flag to create a flag for the "gay nation" in order "to proclaim its own idea of power."

According to Baker, it was gay supervisor Harvey Milk and gay documentarian Artie Bressan Jr., both now deceased, who encouraged him to come up with a new symbol for the gay community. Baker wrote that, while dancing one night on acid, he decided a rainbow flag would be an appropriate choice. (While the website says this occurred at the Cow Palace, Beal told the B.A.R. Baker was actually at the Winterland Ballroom.)

"We were all in a swirl of color and light. It was like a rainbow. A rainbow. That's the moment when I knew exactly what kind of flag I would make," wrote Baker. "A Rainbow Flag was a conscious choice, natural and necessary. The rainbow came from earliest recorded history as a symbol of hope." 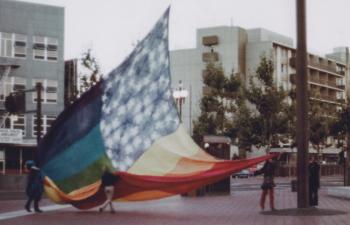 People test one of the first rainbow flags ahead the 1978 Pride parade. Photo: Mark Rennie

Crediting others
Over the last four decades Baker has credited both Segerblom and McNamara for assisting him with the creation of the first rainbow flags. In a 2015 interview with the Museum of Modern Art in New York City, Baker spoke of Segerblom's expertise with tie-dye and McNamara's sewing prowess.

An exhibit honoring Baker and the 40th anniversary of the rainbow flag at San Francisco International Airport also credits the involvement of Segerblom and McNamara. A handout created for the exhibit, which runs through January, says that the three friends "stitched the sections together to create the first of a pair of rainbow flags measuring 30 by 60 feet, one of which resembled the American flag with tie-dyed stars on a blue field."

LGBT historian Glenne McElhinney, who helped dye fabric for the first flags, is making a short documentary about their creation to be used as part of LGBT history classes in California schools. Using first-person accounts, including an interview with Segerblom, and archival material, McElhinney is stitching together a closer look at how the first rainbow flags were created.

"Lynn and James deserve a third of the credit for creating the rainbow flag, for being behind the designs, for doing the stitching and colors, and supervising the artists who did the work," McElhinney had told the B.A.R. earlier this year.

Asked this month about the pushback from Baker's estate against that contention, McElhinney declined to comment. She told the B.A.R. she had not read the memoir excerpts posted online and did not want to get into a back-and-forth with Baker's estate.

In an emailed reply, Segerblom also told the B.A.R. she had not seen the website created by Baker's estate.

"There have been some things that I read, in articles in the past, that were not correct," she wrote. "I hope Glenne's documentary film, that will be finished soon, will clear this up. I'd bet my dollar, on Glenne. She really researches things."

Following Baker's death last year, when most obituaries made no mention of Segerblom or McNamara's participation in creating the 1978 flags, Segerblom decided it was time for her to tell her side of the story while she was still alive. Due to knowing an editor at the Los Angeles Blade, she submitted her account to the LGBT newspaper.

In his memoir, Baker does write about Segerblom and McNamara, according to Beal. But the estate's literary agent declined to release those passages to the B.A.R.

"Gilbert wrote lovingly about James's help and about Lynn's help," said Beal, adding that, "We look forward to sharing the chapters of what went on in that workshop. He gave high praise to Lynn and James."

Beal, 62, a gay man who lives in New York, first met Baker in 1993 and soon became close friends with him. He helped Baker with the creation of a 25-mile-long rainbow flag for the 1994 Pride parade in Manhattan to mark the 25th anniversary of the Stonewall riots.

"James McNamara came to help sew it," recalled Beal, adding that the flag was then cut up into pieces and sent around the world. "It really was the beginning of the internationalization of the rainbow flag. It went from being a national symbol to being an international symbol that year."

Infused with sex
At the suggestion of Beal, the B.A.R. contacted San Francisco-based lawyer Mark Rennie, who is bisexual and has photographed the local LGBT community over the last four decades. He was friends with Baker and took photos of him test flying the oversized rainbow flags a few days prior to the 1978 parade.

"Gilbert was media savvy. From day one he saw himself as a media artist," recalled Rennie, who was introduced to Segerblom by Baker. "They were really tight."

Rennie provided the B.A.R. with several pages from a version of Baker's memoir that is dated from 1999 that he said Baker had given him a copy of prior to his death. In the 13 pages that Rennie shared copies of, Baker several times mentions Segerblom and McNamara, who he credits with teaching him how to sew.

"He gave everything he made the attention of a couturier, and instilled his passion for workmanship and beautiful detail into much of the construction of the Rainbow Flag," wrote Baker. "We sewed and then we ironed each seam as if the gigantic pile of color taking shape in our workroom was being made for a bride."

Baker also wrote about designing the first rainbow flags to be 42 feet by 62 feet - "the largest possible size for display without touching the ground" - for the two flag poles in the U.N. Plaza as they "framed City Hall in perfect symmetry."

He also wrote about the individual looks of the two flags.

"One flag the simple stripes of the rainbow. The other, the same stripes with a field of tie-dyed stars that Faerie had meticulously created, almost like an American flag," wrote Baker. "Both flags were incredibly complicated to match and then sew. She and James and I worked constantly, right up to the moment of the parade."

They worked on finishing the two flags at the Grove Street LGBT center a block from City Hall right up until early in the morning of Sunday, June 26, 1978.

"We weren't tired. Faerie had made everyone a breakfast of echanacea (sic) and ginseng tea and James had brought some cocaine that we were going to try after we completed the sewing," wrote Baker. "We celebrated by taking off all our clothes and rolling around in the soft cotton infusing the fabric with the joy of sex, the most logical way (to) launch a flag for the Lesbian and Gay liberation movement. Despite my notions about beauty and art it really was all about sex. A spectrum of sexuality, and the freedom to express it, that we considered to be a human right."

In another passage, Baker wrote that he always considered the rainbow flag "my masterpiece" and ended the 1970s "as the new Betsy Ross."

As for Segerblom and McNamara, he wrote that they "never let me forget their roles in the creation of the symbol for a whole movement, even though they gladly let me take all the credit. A little jealousy spiced up our dinner parties, but I took it all in stride. They were both very gracious. What we'd made was bigger than all of us."

Baker acknowledged that he "loved the recognition, but everybody knew who was the one that stayed up the long sweaty work nights making it real, giving it life."

It remains unclear when Baker's memoir will reach bookstores. Only a small LGBT publisher has so far expressed interest in publishing it, said Beal.

"We are hoping for a bigger publisher because the memoir is so important," he said. "We want the muscle and marketing that comes with a large publisher."