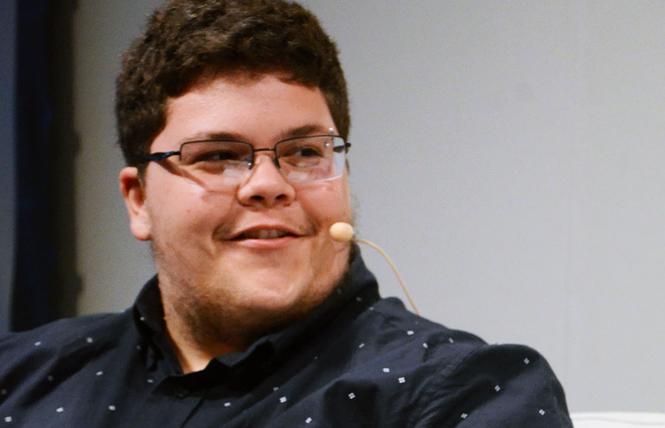 Gavin Grimm spoke about his lawsuit against his old high school earlier this month at the Commonwealth Club. Photo: Rick Gerharter

After a three-year court battle to be allowed to use the boy's bathroom at his rural Virginia high school, trans teen Gavin Grimm said the experience has "opened up my world."

The court fight, still ongoing, no longer affects Grimm personally, since he graduated from Gloucester High School last year, but the grueling ordeal has turned the transgender teen into an activist.

Grimm, 19, described the case - and his personal journey - June 5 at the Commonwealth Club in San Francisco, where he spoke with Abdi Soltani, executive director of the American Civil Liberties Union of Northern California.

He will also be a special guest at this weekend's San Francisco Pride, where he will speak about his experiences from the main stage Sunday, June 24.

"It has been such a privilege to be handed the platform" to fight for transgender rights, Grimm said at the recent panel.

The court fight was often "isolating," Grimm admitted, "because it's hard to find any friends who've been through anything similar." But if given the opportunity to do it again, Grimm said he wouldn't hesitate.
"It's been difficult," he said, "and I was tired a lot of the time," but there has never been a moment where he thought 'I wish I hadn't done this,'" he said. "I've never had any regrets."

Now living in Berkeley, Grimm hopes to become a teacher, a job he thinks will enable him to continue his activism.

The court battle is still in limbo - the ACLU, which is representing Grimm, is waiting to hear from the 4th U.S. Circuit Court of Appeals in Richmond whether it will hear the case.

The lawsuit against the Gloucester County School Board argues the bathroom policy is unconstitutional under the 14th Amendment and violates Title IX of the U.S. Education Amendments of 1972, a federal law prohibiting sex discrimination by schools.

The school board said it was protecting the other students' privacy.

After Grimm graduated from high school, he filed an amended complaint that seeks, among other things, a permanent injunction preventing the board from excluding him from the restrooms when he is on school grounds for alumni activities.

The Grimm case comes at a time when legislators, courts, and school boards are grappling with how to best accommodate students whose gender identity conflicts with the sex they were assigned at birth.

In recent years, federal judges have delivered a mix of opinions on whether transgender students have the right to use bathrooms corresponding to their gender identity.

Grimm's story began in 2014 when he and his family told the high school that Grimm identified as transgender, setting off an uproar from some parents.

"I never had any issues with the other kids," he said, "only the adults."

The family sued the school district, stating that the decision violated Title IX, which prohibits sex discrimination in schools that receive federal funding.

Grimm has nothing but praise for his family.

"I came out to my parents the summer before my sophomore year and, when I returned to school that fall, my mom and I essentially asked the school what they were going to do to protect me," he explained.

The school principal suggested he go ahead and use the boys' bathroom, which he did for seven weeks, until the school board barred him from using it and announced it was going to discuss the situation. The school offered him alternative accommodations in a unisex bathroom, which Grimm said was humiliating.

With less than 24 hours' notice, Grimm and his mom had to argue their case at a school board meeting, where "my genitals and my less than human status" was going to be discussed, he said.

Comments at the meeting, including some from adults who did not have any children attending the school, included many people who were either "disrespectful" or "outright hateful," he said.

"Many people addressed me as a young lady," recalled Grimm. "I told them repeatedly that I felt quite confident that I was a boy."

A second school board meeting was even worse, he said.

Although Grimm's family and friends testified on his behalf, "it was pretty clear to me that [the school board] had made up its mind" before it heard the case.

Grimm explained that he "simply was not a girl" and "just wanted to be a normal child and use the rest room in peace as I'd been doing," but his plea fell on deaf ears.

"Adults were the only ones who tried to impede my rights. I was bullied and I let them know I deserved the rights of every other human being," he said.

When the ACLU heard about the case and contacted the family, Grimm said he was "ready" to become a plaintiff.

"I realized I had to take the matters into my own hands. I'd gotten used to the injustices" that were common in a small, religious conservative community, he said.

Despite the negativity and hate Grimm witnessed during his fight for equality, he is optimistic about the future.

During his speaking engagements, Grimm said he believes he's had the most impact in small towns, where "I'm not speaking to the choir" and where they don't get a chance to see LGBT media.

And when Grimm meets with other young activists, so many "are action minded, motivated, and aware of the tools we need to push back."

"I've gotten so much energy from being around a group of people who know there is something very wrong with the system and want to do something about it," he said.

Editorial: An expensive lesson for VA school board
Sign up!