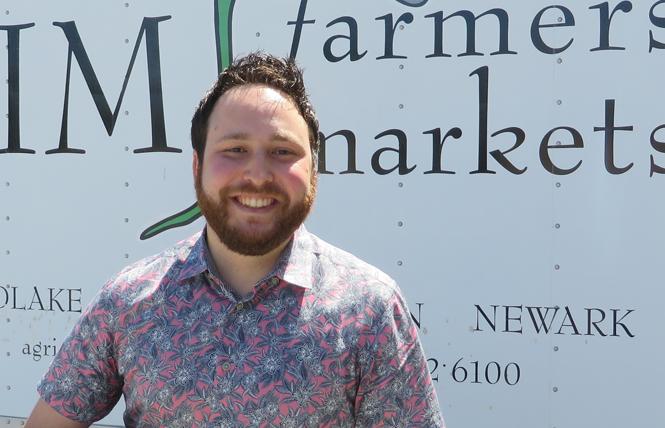 Andy Naja-Riese, holding a bowl of produce, has big plans for the Agricultural Institute of Marin, where he recently became CEO. Photo: Charlie Wagner

Speak with the gay man who is the new CEO of the Agricultural Institute of Marin and one word you'll hear time and again is "community." Andy Naja-Riese is passionate that, "Food is critical to keeping us healthy and it's always about the community."

AIM's mission is "to connect and support communities and agriculture" and the nonprofit manages seven farmers markets in the Bay Area.

Naja-Riese, 35, identifies strongly with AIM's goal, "to educate the public around the nutritional and economic benefits of buying locally grown food directly from farmers." And he is thrilled that diversity is a core value for AIM.

"I'm proud our team includes other LGBTQ people and veterans," he said. "I really believe in the principles of diversity and inclusion."

Naja-Riese considers farmers markets a key tool in reducing hunger, and described how his attitude toward food prices is shaped by his background in social justice. He is proud that multiple AIM programs contain an explicit social justice component.

AIM's board co-chairs said they were pleased to hire Naja-Riese.

"The AIM board is tremendously excited to have Andy leading our wonderful team," co-chairs Tamara Hicks and Lynn Giacomini Stray wrote in an email. "Andy brings a deep understanding of the issues that face farmers markets and the sustainable food movement. His innovative and creative leadership, as well as his passion for healthy eating, entrepreneurship, climate change, and food justice are exactly what is necessary to address these important issues before our community."

AIM's operating budget is $2.1 million. Naja-Riese said the agency does not release salary information. According to the latest IRS Form 990 for 2016, his predecessor was paid $140,160. Naja-Riese said his salary is less than that.

Indirect route to ag institute
Born in Queens, New York, in a family of teachers, Naja-Riese was raised with the idea that education and public service were extremely important. His decision to join AIM is not surprising, but his route was not exactly direct.

Intending to be a veterinary doctor, Naja-Riese started at Cornell University's College of Agriculture and Life Sciences. While still an undergraduate, his interests evolved in a different direction, changing to a focus on the environment and community work. In Ithaca he volunteered for an AIDS organization and found its AIDS Ride for Life to be "an amazing community experience."

Naja-Riese next received a master's of public health from the Harvard School of Public Health, with an emphasis in society, human development, and health. Following graduation, he received a three-year fellowship in community health and fitness sponsored by the Centers for Disease Control and Prevention, which required a move to Atlanta, where the CDC is based.

As part of that fellowship, he then moved to Oakland, California in 2010 and did community outreach at Jack London Square. While living in Oakland, his friends introduced him to another man, also in the public health field. After discovering they had much in common, a romance was sparked and eventually led to the two men falling in love. That man was Gary Najarian, 49.

"I returned to Atlanta, and we had a long-distance relationship for one year," Naja-Riese recalled, "but I moved back to California in 2011." After a short time working as a senior consultant for Resource Development Associates in Oakland, a for-profit company that works with organizations seeking to improve lives in underserved and vulnerable communities, he decided to return to working directly for the government.

Naja-Riese was hired to manage the Program Integrity Branch for the Western region of the U.S. Department of Agriculture's Food and Nutrition Service, where he managed the Supplemental Nutrition Assistance Program (SNAP), also known as food stamps. In California, the program is now called CalFresh/EBT (electronic benefit transfer).

Meanwhile, he and Najarian moved together to San Rafael in 2013, and they were married in October 2015 atop Mt. Tamalpais.

"We decided to create a new last name combining parts of both names," Naja-Riese explained. "We call ourselves the 'giant carpenters,'" which is a rough translation of their new last name. Naja-Riese's former last name was Riesenberg.

Naja-Riese continued working for the USDA until April 2018, overseeing nutrition education programs with emphasis on local and seasonal food, and on May 7, started as CEO of AIM.

"I am so proud of Andy's commitment and passion for social justice, food security, and local farmers," Gary Naja-Riese wrote in an email. "I know that he will bring his unique blend of caring, energy, and humor to all of us in the Bay Area that want to eat better foods from local producers."

He added, "On a personal note, I'm looking forward to even more local fruits and veggies on our dinner table."

Farmers markets
AIM manages two farmers markets in San Rafael at the Frank Lloyd Wright-designed Marin Civic Center; two in San Francisco on Clement Street and at the Stonestown Shopping Center; and three in the East Bay at the Hayward City Hall Plaza, the Newpark Mall in Newark, and on Lake Park Avenue in Oakland.

The Sunday San Rafael market is the third largest in California and attracts up to 18,000 visitors per week in summer. Naja-Riese credits that to the fact that, "Farmer's markets are about fun and trying new food."

AIM works with vendors and has a Farm Audit Program where someone visits vendors' farms to verify the farmer is growing what they sell. AIM also ensures a "market balance" so that too many farmers are not selling the same products. AIM farmers markets offer both organic and non-organic products.

"Many other organizations look to AIM for guidance on how to do farm auditing," said Naja-Riese. "We want to preserve the integrity of farmers markets and support small and family farmers. We believe you should know what you're buying was harvested recently."

AIM markets have a waiting list and applicants are reviewed for quality and variety. Farmers, ranches, fishermen, and artisan food creators are eligible.

Public Market Hall
AIM is also involved in an even more ambitious project in Marin called the Public Market Hall. After Marin voters passed Measure B to fund a permanent farmers market at the Civic Center in 2014, AIM has been working with vendors and the local community in what Naja-Riese called a "public-private partnership."

"We want to create and support educational programs," Naja-Riese said, "and allow farmers to sell 365 days a year. We want this to be a national model."

Now with him as AIM's new CEO, that project will move forward.

All AIM farmers markets accept CalFresh/EBT for eligible items, including plants that produce food. The Market Match program offers shoppers double value when they use EBT. Market Match is supported by foundation and government grants, but will end when the funds are exhausted.

In their spare time, the Naja-Rieses started Bay Area Group Eating Lox (BAGEL), an unofficial tasting competition, and found one of their favorites, made by Marla Bakery, at the Clement Street farmer's market. BAGEL also recently held a gala to raise money for undocumented fire victims of the Sonoma-Napa fires.

In "Diggin' the Market Tours," AIM organizes tour groups who follow a guide as they visit one of the markets. The tours include food tasting, gaining better understanding of food and vegetables, receiving nutritional guidance, and generally getting better access to healthy food.

Working with schools throughout the Bay Area, the "Diggin' in the Classroom" program aims to increase students' awareness about farming and other fun subjects. AIM staff visit schools to explain the principles of healthy eating and discuss where food comes from.

The "Farm Field Studies" program allows groups of children and young adults from the Bay Area to visit local farms. AIM suggests such direct exposure will inspire students to "become active participants in a sustainable food system" as they spend a day at the farm. There is a fee for this program but scholarships are available.

"These programs are some of my biggest passions," Naja-Riese said, "and I want to expand them."

AIM also sponsors what it calls the Kava Zip, which connects vendors with crowdfunding sources for loans. Its website claims 98 percent of businesses using this approach have been successfully funded. The first $5,000 is lent with zero interest.

AIM recently received grants from the Marin Community Association and others to develop a mobile farmers market, so it can "bring a farmers market to low-income and other underserved communities," Naja-Riese pointed out.

Naja-Riese was eager to highlight the value AIM attaches to volunteers and hopes to expand their involvement in the nonprofit.

"I believe in the role community members play," Naja-Riese said, again using one of his favorite words. "They can be ambassadors and be familiar faces to our shoppers. We can even expose high school students to new career paths."

Naja-Riese asserted, "Growing food is the hardest job out there."

"I believe healthy food creates a better society," he added. "Food is now moving too fast and we want to slow the experience down."

AIM is funded by stall fees paid by vendors, as well as grants from other organizations. For a schedule of its markets and other information, visit www.agriculturalinstitute.org.