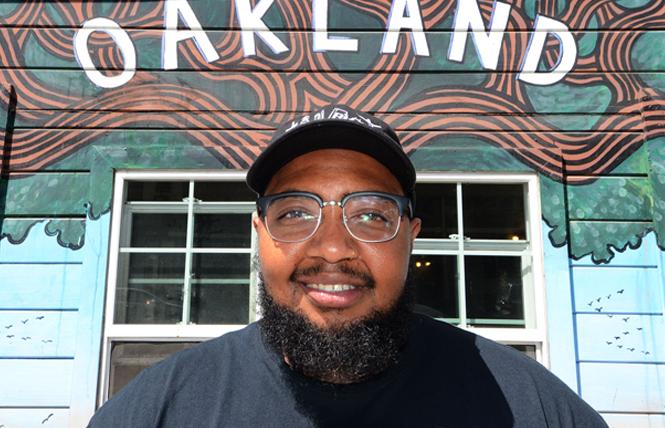 It has been 15 years since Socorro Moreland transitioned. It was an experience that inspired his career working with trans men of color to ensure they receive the help they need to live healthy, safe, and happy lives.

"It is one of my life goals after my experience with transitioning and encountering issues that I would never let another trans young person go through that," Moreland, a Latino trans man, told the Bay Area Reporter in a recent interview.

It was 2003 when Moreland transitioned, and it wasn't like today in the Bay Area, where oftentimes it's relatively easy for young people to get hormone replacement therapy, or HRT. Moreland, who goes by "Cory," said he had to stay in a homeless shelter to qualify for health insurance to be able to begin his transition. He went to Dimensions Clinic, which is run by the San Francisco Department of Public Health out of the Castro Mission Health Center and offers low-cost health services to LGBT youth ages 12 to 25. At the time, it was the only clinic Moreland knew of that offered HRT.

It has been a long journey since then, but today Moreland, 33, works to educate and increase the availability of health and other resources for trans men of color. He works as a healthlink navigator at AIDS Project of the East Bay in Oakland.

APEB is one of the longest-running HIV/AIDS service organizations dedicated to people of color since it opened in 1983. The agency offers HIV/AIDS services to communities most impacted by the ongoing HIV epidemic, including PrEP and HIV and sexually transmitted infection testing and treatment, and provides a primary care clinic for its clients.

Moreland has worked there for five years, often putting in 15-hour days, heading the agency's trans program. He works to increase awareness of HIV prevention for transgender people through community-based education and speaks on panels and conferences, on top of his everyday duties at APEB.

"It's very important to continue working with young trans people out here who need these necessary resources and need to know they are loved," he said. "They need people from their community who understand the process themselves."

George Mizrahi, one of Moreland's colleagues at APEB, talked about his passion for the job. Mizrahi called Moreland's knowledge on trans issues "amazing," and said he can do it all, from navigating a client through the legal name change process to heading the feminization and masculinization services.

The foundation of Moreland's success, Mizrahi said, is his willingness to share his personal experience to help other people's transition.

"Cory is phenomenal," said Mizrahi, a biomedical prevention manager at APEB. "He understands the community and the work on a level that you can't teach. He goes above and beyond for his clients. We would all be running around like chickens with our heads cut off if it weren't for Cory."

HRC fellow
Aside from his work at APEB, Moreland last year served as a fellow through the Human Rights Campaign's HIV 360 Fellowship Program. He said that he learned a lot about nonprofit management skills and leadership efficacy during the eight-month fellowship.

"It was one of those things I was honored to be included in," Moreland said.

Another former fellow of the program, Jalenzski Brown, who identifies as bisexual and genderqueer, first met Moreland at HRC's headquarters in Washington, D.C. at a retreat. Brown said, from the moment he met Moreland, he liked him and thought to himself, "Who's that firecracker?" After getting to know one another during their time as fellows, Brown began to see what a positive voice Moreland was for the trans community.

"What I really love about him is how passionate he is about the work and about making things happen and getting things done," Brown said. "He has brought more awareness to the issues black trans men are facing. He's not just bringing it to the forefront, but keeping it at the forefront."

Website
It was during Moreland's time as a fellow that he got the idea for a website with the goal of empowering trans men of color. After receiving a grant from the Elton John AIDS Foundation, which funds HRC's HIV 360 program, Moreland launched http://www.Brotherhood510.com. The site is a place where trans men of color can go to find support, health and social services, and other resources. It offers an East Bay guide of community resources like where to get HRT or safe places to stay if people are experiencing homelessness.

Moreland also started an Oakland chapter of the national group Black Transmen Inc., a national organization that was started by Carter Brown in Dallas. It's an advocacy group designed to empower black trans people by offering conferences and access to support groups and resources. Moreland started the local chapter last year and it serves about 40 people, with room to grow.

Moreland also serves on the community cabinet at Connecting Resources for Urban Sexual Health, and was a leader at Equality California's LGBT Advocacy Day in May 2017.

He doesn't have much of it, but Moreland spends his free time with his fiancée, Maria Almanza, and likes to cook traditional Cuban dishes. The couple will be married in Oakland in August, he said.

Though he said he doesn't know what his future will bring, he knows he wants to stay in Oakland and continue his work in the trans community.

For Moreland, everyday is all about making progress in the trans movement and making sure trans people get the resources they need.

"My work has just begun," he said.

For more information about AIDS Project of the East Bay, visit https://www.apeb.org/.