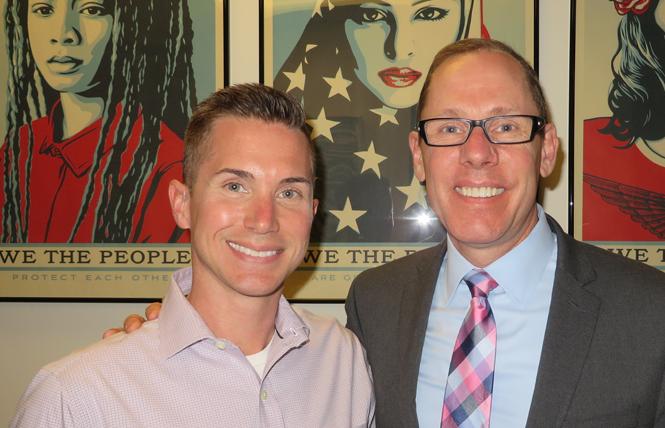 Golden Gate University has long supported diversity and it did so once more when it chose Anthony Niedwiecki to be its new law school dean in August 2017.

School officials celebrated his appointment in a news release, which noted that Niedwiecki is "one of only a handful of openly LGBTQ deans to ever lead an ABA-accredited law school," referring to the American Bar Association.

"GGU Law School is the third most diverse, according to U.S. News and World Report," the dean pointed out, "and because it's such a strong social justice school, the diversity perpetuates itself."

In the 2017 entering law school class of 186 students, 62 percent were from racially diverse backgrounds, 64 percent were women, and 11 percent identified as LGBTQ.

GGU Law previously had the second female law school dean in California and the first African-American dean. The law school currently has 425 students, about 25 percent part-time.

Niedwiecki, 51, grew up in Michigan and was elected to the student council in high school, where he admitted he was a "typically nerdy high school student." Always interested in politics, he decided early that law school was necessary for that career.

He graduated from Wayne State University in Detroit with a B.A. in math, then moved to North Carolina to work as a high school math teacher. He moved to Charlotte to replace another teacher he later found out had been fired for being gay.

"That kept me in the closet for a while longer," he confessed.

While in Charlotte, he decided to enroll in law school and chose Tulane University in New Orleans because it was the "only school which had a publication like the 'Law and Sexual Orientation Journal,'" he said. After being around people who were openly gay for the first time in his life, he came out at age 26.

He described how the conference exposed him to new ideas about using his law degree to advance LGBTQ rights.

In the summer of 1994, as part of his law education, he worked for two law firms in Houston. At the first, he had a terrible time and was warned to "bring someone to events" because "people are starting to talk." His experience at the second was decidedly different, starting with a lunch the firm arranged with a gay attorney in the office.

Following graduation from Tulane, Niedwiecki moved to Temple University in Philadelphia for an advanced law degree program and became a fellow in its master of laws, or LLM, program. After the fellowship ended, he moved to Tempe, Arizona to teach the first law and sexual orientation class offered at Arizona State University.

"There were no LGBTQ students in the class, but I was very open with the students about myself," he said. "I've committed to myself that whenever I am the teacher, no student would feel the way I felt at that first firm (in Houston)."

Next, he moved back to Philadelphia to teach at Temple University. During the NYC Pride celebration, he visited the city and met the man who he would eventually marry, Waymon Hudson.

They moved together to Fort Lauderdale, Florida where Niedwiecki began teaching at NOVA Southeastern Law School. Shortly after that, as the couple passed through the Fort Lauderdale airport, they heard an announcement featuring a controversial Bible quote from Leviticus 20:13, which says that "men who lie with men" are "to be put to death."

Niedwiecki contacted the airport manager and told him, "We should not be hearing Bible quotes and threats of death at an airport." Then he called NBC and ended up on that night's news. The next day, the mayor of Broward County held a news conference to apologize.

The airport pursued the issue and eventually fired the young man who had made the announcement. But when the local Fort Lauderdale press covered the incident, they headlined the story, "Self-proclaimed Christian fired for offending two gay men."

The backlash was immediate.

Niedwiecki and Hudson received death threats and Hudson was spat on in a supermarket. They requested, and received, police protection for their home. Even some of their friends were less than supportive of their activism, Hudson, 39, recalled.

Then Fort Lauderdale Mayor Jim Naugle emerged as a new adversary. Naugle was pushing the purchase of $250,000 "robot-toilets" for the city's parks because, as Naugle said, "We want to have single bathrooms to prevent gay men from having sex in them."

The couple responded to his harassment by organizing protests against Naugle in front of City Hall. They and their supporters came up with a "Flush Naugle" protest message, and asked people to mail in toilet paper to the mayor's office.

Naugle had offended so many different communities that the protests were organized in coalition with the American Civil Liberties Union, labor unions, and other civil rights groups.

The men also started a nonprofit called Fight OUT Loud to support LGBTQ individuals facing discrimination and hate (http://www.fightoutloud.org). Their first cause beyond the airport incident was supporting two young lesbians in Portland who were abused by a bus driver as he was kicking them off a bus for kissing.

Run for office
Niedwiecki decided to take his activism a step further and run for the office of city commissioner in Oakland Park, Florida, where they lived at the time. Oakland Park is adjacent to Fort Lauderdale. He began his race in 2007 for the election in March 2009.

He was one of the few openly gay people running for office in Florida at that time and received substantial support from his co-workers at NOVA Southeastern. He won the race and served for a year and a half, including a stint as vice mayor.

During the campaign, and after six years together, Niedwiecki and Hudson decided to get married in San Francisco when it was briefly legal in 2008. Word of their marriage spread back home but they were relieved to notice few negative reactions.

Because Niedwiecki was elected commissioner, Oakland Park was one of a handful of cities in the U.S. that passed a resolution against "Don't Ask, Don't Tell," the federal law that prohibited gays and lesbians from serving openly in the military. He also pushed Oakland Park to expand benefits to same-sex couples, add protections for transgender employees, and hold its first Pride celebration.

During his term in office, the couple took in a foster child considered "unadoptable" by Florida because of the child's HIV status. Their foster son lived with them for several years before he was accepted into college and moved to Portland in 2009, but they keep in touch. Niedwiecki asked that his son's name not be published.

Advocate for foster youth
As they cared for their foster child, they learned how bad the Florida foster care system was. They were shocked to find out that their state preferred a child become homeless rather than be adopted by gay men.

The couple lobbied the Florida state Senate to overturn the state's 1977 ban on gay adoption, instituted in response to Anita Bryant's campaign. They were relieved when then-Governor Charlie Crist said in 2008 that he would not appeal the the Florida Supreme Court's decision that the ban was unconstitutional.

In 2010, Niedwiecki and his husband moved to Chicago so Niedwiecki could serve as associate dean of the John Marshall Law School. At John Marshall, he started a clinic to do transgender name changes because, as he explained it, "I always try to infuse my values wherever I go."

Fort Lauderdale changed a lot during the couple's years there and in the time since.

Dean Trantalis, a gay attorney, was elected mayor of Fort Lauderdale this year, and took office in March.

"[He] was one of the main organizers when we were holding protests," Niedwiecki said.

Current role
In his current role as GGU law dean, and in response to President Donald Trump's comments and directives on immigration, he distributed this statement to all law students: "We are committed to our students including LGBTQ and illegal immigrant communities."

Niedwiecki met with each new law school student last fall and observed that a large number were driven by social justice concerns, and at least 25 percent claimed they enrolled in law school in reaction to Trump. He believes this is part of a national trend and commented, "They decided to do something about it."

"We can send people who contact us to different organizations for help, like Lambda Legal," he said, referring to Lambda Legal Defense and Education Fund.

Hudson, a former writer for Huffington Post, does most of the social media updates these days.

"We have a large following on Facebook and Twitter," Niedwiecki said, "and have been able to pull communities together which don't always talk to each other."

Niedwiecki said that he and Hudson try to help people connect with organizations that can help them, such as the American Civil Liberties Union or smaller LGBTQ agencies.

"Most of the time, these are sensitive issues that make it hard to talk about publicly," he said. "We just try to keep a presence online, both as the organization and as individuals, which helps people find us when they are in need."

He believes "being dean gives me another outlet for my activism."

And as his husband, who is the GGU law communications coordinator wrote recently, "Dean Niedwiecki has seen firsthand how laws can both stifle progress for equality and also dramatically expand access to civil rights very quickly."