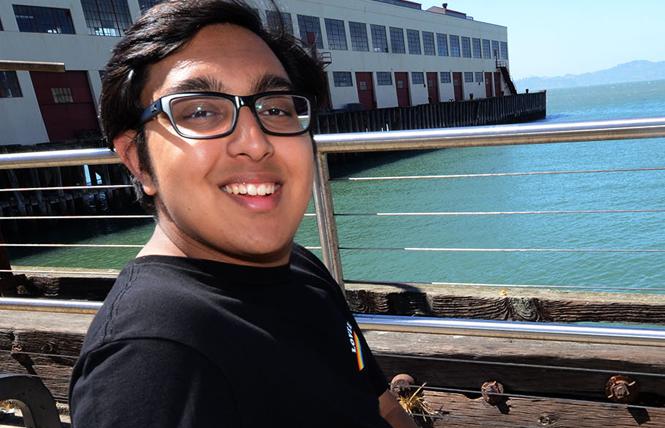 At 16 years old, most kids' priorities are getting their driver's license, being a part of the popular circle at school, or taking perfectly lit selfies. But for Sameer Jha, it's achieving equality for the LGBT community and fighting for the safety and inclusion of LGBT youth. He's already the founder of a nonprofit, a youth ambassador for the Human Rights Campaign, and an author.

Jha came out when he was 14 during some of the hardest times of his life, and has since been dedicated to educating youth and adults about the LGBT community with the goal of squashing stigma, bullying, and hate.

"A lot of what I am doing is talking about the experiences with bullying I have faced and trying to combat that," he told the Bay Area Reporter in a recent interview. "I want people to understand the importance of LGBTQ-plus identities and make sure students are protected, included, and have safe spaces."

Most recently, Jha fought for the use of LGBT-inclusive sex education curriculum for fourth through sixth graders in the Fremont Unified School District, where he previously was a student at Hopkins Junior High School. He stood up in front of hundreds of people at the May 2 school board meeting to share his story and explain the importance of educating young people about LGBT identities.

"No student should have to go through what I went through in elementary and middle school," he said. "Sex education is a way to get information to students and to show LGBT students that they are important and valued by the school and its curriculum."

Though the school board voted to nix the inclusive sex-ed program, Jha's mission didn't take a dip. Currently, he is in the final stages of completing a teacher's guide called, "Read This. Save lives." The 150-page book is used to inform educators about the experiences of LGBT students, their identities, and the intersection of identity, race, and sexuality to help create safer classrooms for queer youth. He hasn't made his GoFundMe goal yet - he's raised nearly $1,500 of his $8,000 ask - but is determined to see the book become a reality. He is now searching for publishers.

The book is just one of Jha's projects. Through his nonprofit, the Empathy Alliance, Jha holds workshops, consults gay-straight alliances in various communities, and conducts school assemblies.

A couple months ago, he held a workshop at Hopkins, his former school. It was there that Jha faced his bullies on a daily basis, had tarantulas thrown on him during science class, and where he first heard the word "gay," which was used as a slur to insult him or as a synonym for uncool, as in "that's so gay."

It is those dark times that drive the everyday fight for his community. The workshop at Hopkins included anti-bias training, how to dismantle stereotypes, and the impact words can have on people.

"I want people to be aware of how actions and words affect others," Jha said. "People didn't know what they were doing affected me."

The workshop wasn't the only thing he did for his old middle school. After founding the Empathy Alliance, Jha led efforts to originate the school's first GSA, which today is thriving.

"There is such a huge change. I'm so happy to see the whole school completely shifting and beginning to be a community of people driven to make change and support each other," Jha said.

High school
At College Preparatory School in Oakland, Jha's high school, he strengthened its GSA's annual Day of Silence, a national event held each spring at schools across the country. Students take a vow of silence for a day to represent the isolation LGBT youth often experience, especially when they don't feel safe coming out. He said seeing more than 100 students not speak in honor of the LGBT community was "powerful."

For Jha, being an activist also calls for moments of celebration. For Pride Month, Jha organized a Pride party at the new Fremont Community Center in the city's Central Park. Many of Jha's mentor's will be in attendance at the event Thursday evening.

When talking to Jha's mentors and people he has worked closely with, they said they feel Jha has, and will continue, to make incredible change in his community and beyond.

Jha attended the Human Rights Campaign's "Time to Thrive" conference last spring in Washington, D.C., where he worked closely with Vincent Pompei, director of HRC's Youth Well-Being Project. As youth ambassador, Jha was asked to participate in panels at the conference discussing LGBT identity, particularly nonbinary identities, with educators and counselors in the audience.

"He is just one of those young people that gives you hope," Pompei said. "He will be a leader who will stand for things. He amplifies the voices of other LGBT people and helps us to better understand and support them."

Monique DeVane, head of school at College Prep, called Jha a "real leader." DeVane has been able to watch Jha interact, guide, and inspire other students at his school, where he is a member of its Student Equity Action team.

"He has a wonderful way of engaging with his peers and community members. He is a leader who doesn't come from a place of ego, but from a place of service. He is consistently positive and generous in his approach to others and inviting folks to join him in conversation," DeVane said.

Jha's leadership is apparent in almost everything he does. Though he dedicates an incredible amount of time to his activism, he still lives the life of a normal teen - hanging out with friends, spending time with family, and participating in school events.

He also has a passion for poetry and other writing. He won a gold medal in the 2018 Scholastic Art & Writing Awards for his poem "Partition," which is about the British divide of colonial India into two independent countries, Muslim Pakistan and Hindu India, in 1947. Jha's mom is Pakistani and his dad is from India. The poem expresses the exploration of his race and heritage.

As for his future, he hasn't decided on a college just yet, though he is interested in becoming a professor of linguistics and gender and sexual studies. But there is one thing he is certain about, he wants to make change - big change.

"I want to change the world and make it a better place," he said.