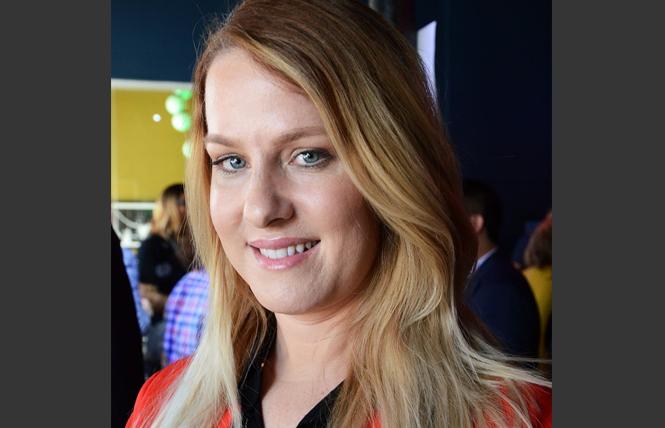 Inside an office space carved out of the ground floor of the San Francisco LGBT Community Center is a staff of three working to uplift the city's transgender residents as well as underserved members of the broader LGBT community.

They are working on a report that examines what the unmet needs are of the city's transgender community, to be released later this summer, and launching an economic fellowship program for transgender immigrants to the Bay Area. They also have been making sure that the more than 2,500 buildings the city owns or leases have the proper signage declaring single-stall restrooms can be used by all genders, as required by city and state laws.

Known as the Office of Transgender Initiatives, it is believed to be the first such municipal office of its kind. The late mayor Ed Lee launched it two years ago this month and had appointed longtime transgender advocate Theresa Sparks to oversee it.

When Sparks retired last fall, Lee appointed Clair Farley, a transgender woman who had worked on economic issues for the LGBT center, as his second senior adviser on transgender initiatives.

"It has exceeded my expectations in a lot of ways," Farley, 35, told the Bay Area Reporter during a recent interview about the work she has been doing for the city.

Her focus, she said, is on "how do we put the community first and lift up the needs and priorities of the community?"

The office falls under the purview of the mayor and city administrator. Assisting Farley is Pau Crego, who is transgender and nonbinary, as director of policy. Crego started in the position last July after being hired by Sparks.

Maceo Persson, a queer transgender man, joined the office January 2 as the civic engagement and operations manager. For the past decade he had worked for the Transgender Law Center in various capacities.

He saw working for the city as "a great opportunity," said Persson, to do the same kind of work he had been doing in the nonprofit sector but with "a different perspective."

Farley's first day on the job was December 4, eight days prior to Lee's sudden death from a heart attack. Over the last seven months Farley and her staff have worked for two mayors.

First under District 5 Supervisor London Breed, who briefly served as acting mayor following Lee's death due to her being president of the Board of Supervisors. And then for Mayor Mark Farrell, the former District 2 supervisor who was elected by a majority of his board colleagues in January to serve as mayor on an interim basis.

Having won the special election on the June 5 primary ballot to serve out Lee's term through early January 2020, Breed is expected to take her oath of office on July 11 as the city's first elected African-American female mayor. Earlier this year, Breed had told the B.A.R. that she not only supported maintaining the transgender initiatives office but would also be open to expanding its job title to include all LGBT initiatives under her administration.

Farley has worked on a number of LGBT initiatives in recent months, such as the renaming of Terminal 1 at San Francisco International Airport in honor of the late gay supervisor Harvey Milk and an agreement with sister city Cork, Ireland to jointly advocate for LGBT equality on the world stage. And she has also been a voice within City Hall advocating for the establishment and funding of LGBT cultural districts in various neighborhoods.

But with transgender individuals disproportionately impacted by homelessness, unemployment, and physical violence, Farley does not want to see any expansion of her office's role diminish its focus on the needs of the transgender community.

"In working with the most vulnerable in our community, we find that transgender initiatives are the most needed," she told the B.A.R. this spring.

Farley had yet to meet with the mayor-elect when she spoke with the B.A.R. last week. She said she expects to have a good working relationship with Breed, noting her support of numerous LGBT initiatives and programs over the years as a supervisor.

"During the brief time we worked together, I felt we worked together well," Farley said of when Breed served as acting mayor. "I hope she continues to see the opportunity in our work to make San Francisco special and continue to be seen as a leader."

National impact
The work her office is doing, added Farley, has the potential to impact the lives of transgender individuals and other LGBT community members on a national level.

"San Francisco is not going to stop here but is going to work to make change across the country," said Farley.

In addition to working with her counterparts from Cork, Ireland at the international level, Farley is also working with her colleagues in other city halls across the country whose bosses have joined the group Mayors Against LGBT Discrimination, which Lee helped to co-found. Through the coalition, she shares LGBT policies that San Francisco has implemented.

For example, Farley worked with City College of San Francisco officials on their recent policy update for using the preferred names and pronouns of transgender and gender-nonconforming students. Her office has also been in talks with the San Francisco Superior Court to ensure it is using transgender people's preferred names and pronouns in court records and documents.

And it has helped train more than 50 service providers with city contracts on how to collect sexual orientation and gender identity demographic data. Since July 1 San Francisco has required any agency funded by it, as well as numerous city departments, to collect the SOGI data.

One issue that has come up is that many transgender people do not want to disclose what sex they were assigned at birth. Farley's team is working with the Department of Public Health in refining how the question is asked.

"I think what we have found is a lot of people feel uncomfortable answering that question," said Farley.

In May the office brought together the 14 members of its Transgender Advisory Committee for its first meeting. The members represent local nonprofits, such as El/La Para TransLatinas, health care providers, and businesses.

It is assisting Farley and her team on its needs assessment for the transgender community. The city currently spends $1.5 million annually on transgender services and programs, but more resources are needed, said Farley.

"It will include recommendations for funding and programs," said Farley of the report.

Her office has already teamed with the city's Office of Civic Engagement and Immigrant Affairs to pilot an economic fellowship program for transgender immigrants. The idea is for them to develop professional skills through placement with local nonprofits. It should roll out in a limited capacity next January, and Farley plans to seek upwards of $200,000 in next year's budget to expand it.

This August, Farley plans to roll out a transgender and LGBT employee resource group for those already employed by the city. She hopes it will also provide assistance to those looking to be hired by city agencies.

"We don't have a firm count, but we know there are not a lot of transgender people working for the city," noted Farley.

Because the office does not provide direct services, it is not open to the public. But anyone with an issue can email it at transcitysf@sfgov.org or use the hashtag #transcitysf on social media platforms to ensure it sees the post. It is also its Twitter handle.

Since coming to work in the office earlier this year, Persson has been struck by the fact that his colleagues throughout the city bureaucracy have reached out for help in improving how they provide services to transgender individuals and the LGBT community in general.

"Seeing people really want to serve our community well has been really wonderful," he said.