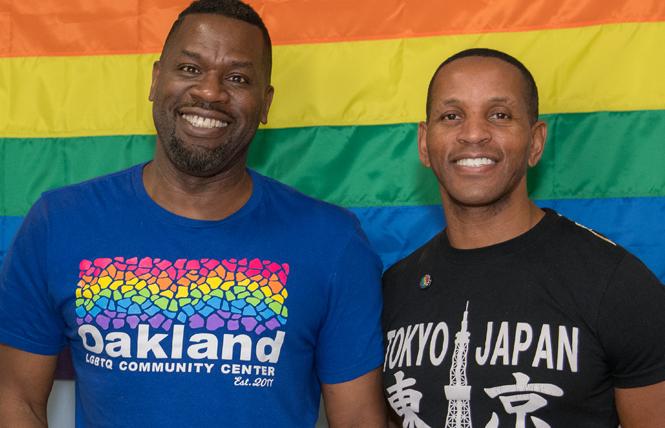 When the Oakland LGBTQ Community Center opened its doors lastSeptember, the two gay African-American men who founded it breathed sighs of relief. It had been a long process to secure the space near Lake Merritt, and the organization didn't have much of a budget.

But Joe Hawkins and Jeff Myers, the center's co-founders, want to make sure that the city's large LGBTQ population has a safe space in which to hang out, even as they work to secure funding from the city and private foundations. In January, the men had to strategize quickly when the main tenant suddenly left, leaving them with way too much space and the rent doubled to $9,000 a month.

A creative solution was found when Hawkins and Myers rented out several small offices to other tenants - many of them queer themselves or LGBTQ-friendly.

"By February we had filled the offices," Hawkins said in an interview at the center.
Tenants include therapists, wellness services, and video production.

Oakland has not had an LGBTQ center until now. Previous efforts, such as a pledge by Oakland Pride to funnel proceeds from the fall festival into creating a center, did not come to fruition. Hawkins and Myers, both in their 50s, were formerly involved with Oakland Pride and got tired of waiting. After Donald Trump was elected president, they felt a sense of urgency.

"I said, 'Jeff, do you really want to open a center?'" Hawkins recalled. "Then you better help me."

Just starting the center was an accomplishment.

"There's no LGBTQ center funded by two African-American gay men in the state that's for everyone," Hawkins said, explaining that the men contributed their own money and funds they raised to get the doors open.

"This was money out of pocket we didn't have," he said, adding that they did get $1,000 from Oakland Pride, and another $1,000 from City Councilman Abel Guillen, who identifies as two spirit.

Today, over 30 groups meet at the center, ranging from yoga to dance to crystal meth anonymous. It holds movie nights, has a small library of queer-themed books, and book club meetings.

The center is all-volunteer run, and has a budget of about $150,000. Hawkins is an event producer, best known for creating the hugely popular gay Blatino Oasis event in Palm Springs. Myers is a surgical nurse at UCSF.

Leslie Ewing, a lesbian who is executive director at the Pacific Center for Human Growth in Berkeley, was an early supporter, in part because the two centers are very different. Pacific Center's main mission is to train therapists and operate its mental health clinic.

"In Oakland, and I've lived there since 1981, people are looking for a place literally to find one another and community," she told the Bay Area Reporter in a phone interview. "They can do things the Pacific Center can't do."

Ewing said that Hawkins contacted her before he sent out a news release about the center.
"He's a good guy and he wanted to really work together," she said.

Pacific Center, one of the country's oldest LGBT centers, is helping in two ways, Ewing explained. It is providing a therapy group for older adults, for which it pays some rent, and is providing training and support for the Oakland center's peer group "to help them get that up and running."

Hawkins and Myers said the need for the center is evident by the 26,000 people who are signed up on its email list and the many people that attend its events.

"There's a lot of homophobia and stigma in communities of color, and we wanted a safe space," Hawkins said.

Myers pointed to the diversity of the center. "The community deserves a center that serves our diversity," he said. "We have money, we have talent, we have resources."

But more support and visibility is needed and that will likely come this weekend at San Francisco Pride.

For the first time, the Oakland LGBTQ Community Center will march in the San Francisco Pride parade as a contingent. And it will have a booth at the festival Saturday and Sunday.

"We want to be visible," Myers said.

For more information, visit https://www.oaklandlgbtqcenter.org/. The center is located at 3207 Lakeshore Avenue (entrance on Rand Avenue).