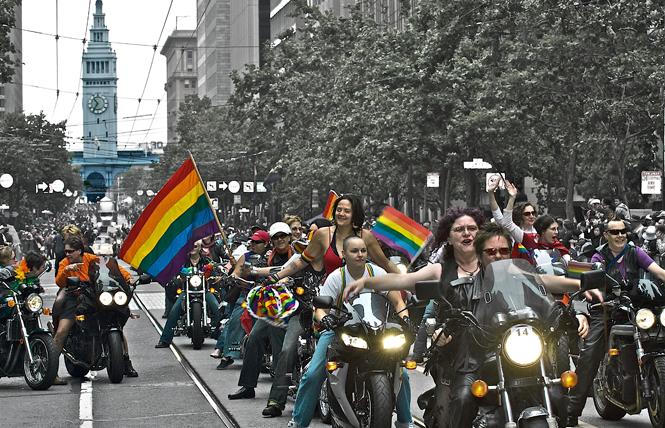 The Dykes on Bikes have blazed a trail for decades, leading the San Francisco Pride parade in a symbol of lesbian power and resistance. So, it was sad to hear that Soni Wolf, one of the group's founding members, died April 25, shortly after she was named a community grand marshal for this year's parade.

Wolf fought for change during her life. She challenged assumptions that the word "dyke" was pejorative and embraced the word, encouraging the community to reclaim it, much as it did the pink triangle, once a sign of Nazi oppression for gays. Eventually, she won a trademark for the name, Dykes on Bikes, and today it signifies pride in the LGBTQ community.

SF Pride will honor Wolf from the main stage on Sunday. And, we're sure that she will be remembered at the start of the parade, when all those dykes rev their motorcycle engines for the ride up Market Street. 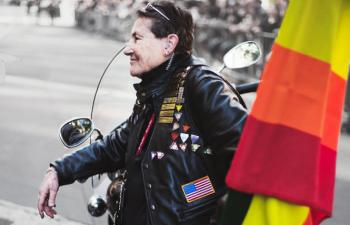 The late Soni Wolf was a founding member of Dykes on Bikes. Photo: Sarah Karlan

This special Pride section includes stories of other LGBT people working to make change in their communities, or for the greater good of everyone.

This is the second year in a row that President Donald Trump has refused to issue a Pride proclamation, which is just added confirmation that he is not a friend to the community, no matter what he says. It's quite clear that Trump regularly lies and thinks that posting untruths on Twitter will make them true. It does not.

San Francisco, which next month will see Mayor-elect London Breed sworn in, remains firmly in resistance mode against the Trump administration, as do other Bay Area cities. Our leaders value diversity. We are stronger when everyone is represented, and when we use our voices to call out injustice, prejudice, homophobia, and transphobia.

So, enjoy yourself at SF Pride. But remember that, these days, a lot is at stake as the president and his administration roll back rights and pit groups against each other. Think about ways you can get involved in the community and turn those thoughts into action.