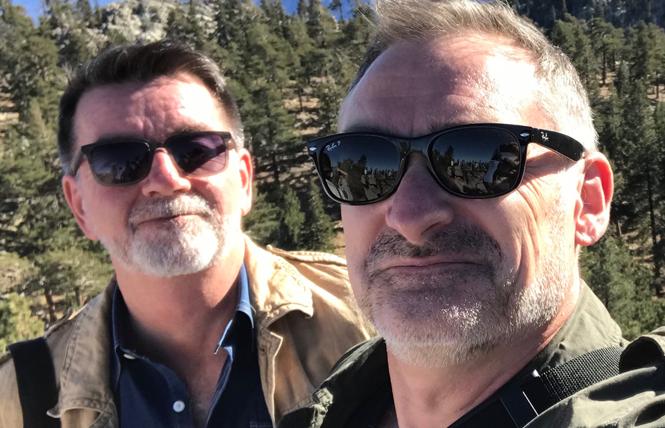 The owner of Last Call Bar in the Castro district, Kevin Harrington, was allegedly spit on and called a faggot twice by a young man Monday morning. When Harrington reported the incident to San Francisco police officers, he said they refused to take witness statements and asked if Harrington was a faggot.

On his way to work June 11, Harrington, 52, and his partner, Karl Kopplin, parked their car on Noe Street near 18th Street around 9:15 a.m. Harrington got out of his car and walked to the trunk to grab his backpack. He then saw a man aggressively driving a navy Toyota Prius in his direction. Harrington yelled at the man, "Hey, slow down. I'm walking here."

The man in the Prius then stopped his car, got out, and started to approach Harrington while yelling at him, Harrington said.

"He was so angry and in my face," Harrington told the Bay Area Reporter. "I've lived here for 18 years. I stood my ground."

Harrington said the man threatened to kill him and his partner, spit in Harrington's face and called him a faggot. The suspect was described as 6 feet, skinny, and in his early 20s with bleach blond hair, Harrington said.

"Instead of hitting me, he spit in my face," Harrington said. "At that point, I chased him."

Harrington said the Prius driver then got back in his car while threatening to "fuck up" Harrington's car and drove off erratically on 18th Street before turning and driving on the wrong side of Noe Street. Harrington and his partner thought the man was going to leave the area.

Meanwhile, an employee of the 7-Eleven located next to Last Call Bar, at 18th Street, saw the incident and called the police while it happened. The police asked to speak with Harrington. The 7-Eleven employee handed the phone over to Harrington, who completed the call.

Harrington started walking back to his car, afraid the man would try and vandalize it. Kopplin remained in the bar. The suspect then parked his Prius near Harrington, who said the suspect had keys in his hand, indicating to Harrington that the man was going to key his car.

It was then that Kopplin came out of the bar and approached the scene. The suspect spit on Kopplin, called him a faggot, and spit on Harrington a second time.

The man got back in his car and drove off.

Harrington began to tell Officer Michael Marcic and Officer Frisk, whose first name wasn't immediately available, what happened near the scene of the incident. When Harrington told the officers that the suspect spit on him and called him a faggot, Marcic responded by saying, "Well, are you?" Harrington said. Harrington asked if the incident would be investigated as a hate crime and Marcic said that calling Harrington and his partner a faggot and threatening to kill them was a First Amendment right and not concise enough to be considered a hate crime, Harrington said.

"He called us faggots and threatened to kill us. How much more concise does it need to be?" Harrington said.

"It's our word against the guy if he doesn't get a witness statement," Harrington said.

When the B.A.R. spoke with San Francisco Police Department spokeswoman Officer Grace Gatpandan, she said it was too early to define the incident as a hate crime. But she did say the hate crimes unit was informed of the incident and will be given further information and evidence once it is gathered. The incident is currently being treated as a battery investigation.

Harrington posted the incident on the online community forum Nextdoor and another witness came forward who said the episode may have been captured on their home security cameras.

"I want to make sure he is prosecuted. I want him in court," Harrington said.

The event left Harrington angry with both the suspect and the police.

"There are great police officers out there but some of them, frankly, seem to side with the people doing these crimes over us," he said. "[The police] look at the merchants around here like there is some kind of problem."

Harrington talked to gay District 8 supervisor-elect Rafael Mandelman about the incident. Mandelman reached out to Mission station Captain Gaetano Caltagirone and asked him to call Harrington.

"It's concerning to me if people are reporting crimes and if they are not being treated well or their reports are not taken seriously," Mandelman told the B.A.R.

"I explained to him what happened and told him [the suspect] spit in my face twice and called me a faggot," Harrington said. "[Gaetano] said, 'that's not nice.' I told him it's more than not nice, it's assault."

Gaetano told Harrington he would contact the witnesses and look into the incident.
In regards to the officer asking if Harrington was a faggot, Mandelman said, "If that is what happened, that is absolutely unacceptable."

Harrington said this isn't the first time he has called police and little action was taken. He said about four years ago an intoxicated Last Call customer assaulted a bartender, kicked down an office door inside the bar, and punched and broke multiple panes of glass in the bar's front door. The person was never prosecuted, Harrington said.

"I'm sick of it," Harrington said. Referencing the June 11 incident Harrington said, "It's 2018 and it's Pride Month and that's how the police responded."