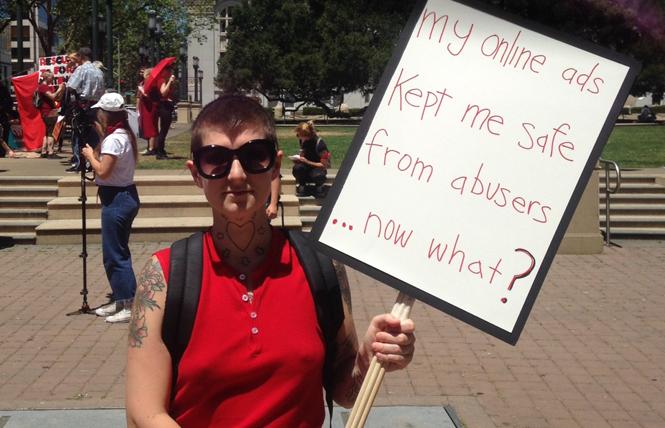 At a June 2 rally, a protester asks how they are to keep themselves safe from abusive clients following the federal government's crackdown on websites assisting sex workers. Photo: Christina A. DiEdoardo

It's often said that for members of marginalized communities, their simple existence requires complicated acts of resistance. There are few more salient examples of this than the lives of sex workers in the Bay Area and across America.

Since 2014, the biggest websites they used to screen clients and spread the word about dangerous ones - such as the former myredbook.com - have been seized by the federal government, which has also pressured banks and other financial services providers to close or freeze the accounts of sex workers. As shown by their "Aye" votes on FOSTA-SESTA, which makes internet sites and providers criminally liable if they "promote" consensual prostitution, apparently one of the few things Democratic politicians - including House Minority Leader Nancy Pelosi (D-San Francisco) and Senator Dianne Feinstein (D-California) - agree with Republicans about is making the lives of sex workers more difficult.

Despite this background, on Saturday, June 2, nearly 500 sex workers and allies assembled at Frank Ogawa Plaza (also known as Oscar Grant Plaza) in Oakland at a rally sponsored by Bay Area Prostitution Support to send a clear message to their adversaries.

The Bay Area has a long history of resistance like this by sex workers. From Margo St. James' founding of COYOTE (Call Off Your Old Tired Ethics) in 1973, which advocated for the decriminalization of sex work for decades, to the creation of the St. James Infirmary in San Francisco in 1999 to serve the medical needs of those in the profession, sex workers here have been a shining example of what a community can accomplish if it taps its collective power by organizing.

Even so, the stakes have rarely been as high as they are at present. Worse, sex workers may be only the first target of laws like FOSTA-SESTA, not their last.

"When you really boil it down, [FOSTA-SESTA] is not really about [sex] trafficking and it's not about sex work," Eliot Harmon, associate director of activism for the Electronic Frontier Foundation, said at the rally. "It's about your right to organize."

In Harmon's view, under FOSTA-SESTA the internet "is going to become a more restrictive and more censored platform," he said. "And if [internet providers] think you're too high-risk, there's a real danger of you being pushed off the platform."

Prior to FOSTA-SESTA, the federal Communications Decency Act generally provided internet service providers with a safe harbor from liability if they could plead ignorance of what the government considered to be illegal activities on their sites. As a result, prosecutors were limited to going after sites like myredbook.com, which was designed to provide support services to sex workers (like a "bad date" list, which describes clients who don't pay, are violent, or both) or those like http://www.backpage.com, which prosecutors contended was dependent on sex worker advertisements for its economic survival.

After FOSTA-SESTA, prosecutors have the power to go after social networks like Facebook and FetLife if they find evidence that members are using the network to "promote" sex work, which is why Harmon believes there's a strong incentive for those networks to err on the side of restricting the behavior of their users.

To many sex worker advocates, all laws like FOSTA-SESTA accomplish is to push more and more sex workers into street-level prostitution, a segment of the market where workers often face the highest level of risk of arrest, injury, or death.

Cat Brooks, co-founder of the Anti-Police Terror Project and candidate for mayor of Oakland, told rally attendees the struggle was personal for her.

"In my 20s, I lost a dear friend who was a sex worker to violence at the hands of a client," Brooks said. "What if she had access to platforms that could have helped her stay safe?"

After a march to the Rene C. Davidson Courthouse by Lake Merritt and then back to Frank Ogawa Plaza, some attendees received a stark reminder that their safety wasn't guaranteed.

There's a long tradition in Oakland of protests, like this one, taking place on the streets without permits or formal road closures. In most cases, volunteers block intersections as needed with their bodies until marchers can pass, then withdraw and normal traffic flow resumes.

In a shocking departure from that tradition, at least three cars tried to run the blockade. One, a silver Scion, got through and struck a bicyclist - and, according to witnesses, did so intentionally. Another vehicle was stopped by two volunteers who kept it in place until the rear guard of the march was clear.

The third was a Volkswagen Touareg with Idaho plates whose white male driver not only got out of his car, but got physical with multiple protesters, most of whom were women. It seemed a matter of time until he'd swing and connect with someone's head when a sudden BANG rang out.

I'll never know who spiked the guy's back tire, but whomever it was deserves a lot of credit, because they probably stopped the driver from hurting or killing someone. As the murder of Heather Heyer in Charlottesville, Virginia last August demonstrated, the only prudent way to treat cars whose drivers don't respect blockades is to recognize them as the deadly weapons they are and act accordingly.

It says a lot, too, that while the Oakland Police Department did literally nothing to stop the driver as he physically attacked multiple people, their officers came running after property was damaged - and even tried (and failed) to help him change the tire.

So long as the lives of sex workers and their allies are seen as less worthy of protection by the government than a piece of rubber, safety lies in self-help.