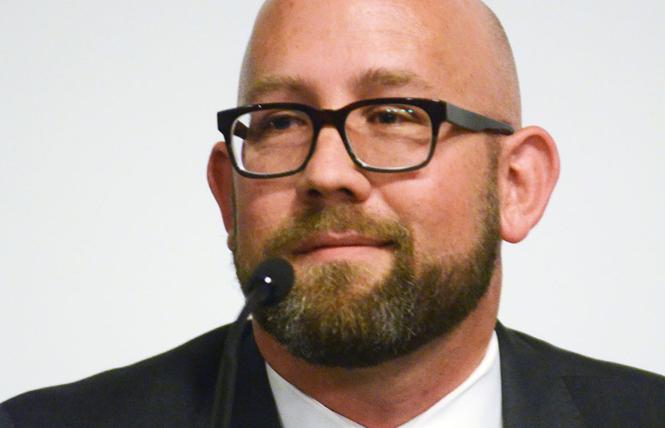 I am so grateful to the voters of District 8 for putting your faith in me as your next supervisor. At a time when our city faces tremendous challenges, with thousands of people suffering on our streets and neighborhood small businesses closing daily, your belief in me is a trust I will work tirelessly to honor.

I am especially grateful to our sometimes-fractious LGBTQ community, which came together in unprecedented fashion in support of my campaign. We were able to unite the Alice B. Toklas and Harvey Milk LGBT Democratic clubs, the Bay Area Reporter, and queer elected officials from all sides of the aisle. This kind of unity is especially important now, at a time when LGBTQ representation locally has diminished - I will be the sole queer member of the Board of Supervisors - and hard-won legal advances are threatened by a hostile Trump administration and a federal judiciary that will increasingly reflect the values of that administration.

From the beginning of my campaign, I have argued that city government needs leaders committed to bringing people together, rising above ideology, and moving our city forward. District 8, the geographic and ideological center of San Francisco, demands that kind of leadership, and I pledge to work everyday to provide it. The voters of District 8 are liberal, but we are pragmatists. I plan to spend my time in City Hall showing that there is no necessary conflict between progressive values and pragmatic solutions.

Knocking on doors and talking to constituents on street corners over the last year, I have been continually impressed by how much our residents care about their neighborhoods and their city, but I have been saddened by how many people seem to have despaired of our local government actually delivering the services we deserve. We have an $11 billion city budget, a mind-boggling figure that has almost doubled in the last decade, yet rare is the San Franciscan who feels she is getting twice the level of services she was 10 years ago. Far from it. Despite all our wealth, and despite a swelling city budget, City Hall has for too long failed to live up to San Francisco's reputation as the "city that knows how."

When we started this campaign, I knew that homelessness was going to be my first priority if elected. I've spoken often about my own family's experiences with mental illness and homelessness. But beyond being a personal priority for me, I believe the presence of so many seriously sick people on our streets is our city's greatest public failure.

For too long, politicians in City Hall have used homelessness as a weapon against their opponents, while the problem festered, human misery increased and neighbors grew increasingly frustrated. The fight locally over state Senator Scott Wiener's (D-San Francisco) conservatorship legislation, SB 1045, reflects that history of dysfunction and distrust. Wiener and I do not agree on everything, but we agree on the need to get the sickest folks off the streets and into care, whether or not they recognize their inability to care for themselves.

From my first day in office I will be working tirelessly to expand the number of psychiatric beds and drug treatment facilities, establish longer term sub-acute care facilities for people who simply cannot live on their own, and, if passed by the Legislature and signed by the governor, implement SB 1045 compassionately and effectively at the local level. Of course, these steps alone will not solve our homelessness crisis, but they can significantly improve the condition of our public spaces and help ensure that the sickest homeless people get the care they need.

The issues that are of the biggest concern to District 8 residents - homelessness, filthy streets, vacant storefronts, housing unaffordability, rising traffic congestion, and an inadequate public transportation system - are not "progressive" or "moderate" issues. They are issues that affect everyone and require dedicated and pragmatic leadership to solve.

Forty years ago Harvey Milk was elected on a promise of hope; as I prepare to take the seat that Milk once held, I have, of course, been thinking quite a bit about his legacy. Four decades later, the need for hope is no less. Today our task is to restore San Franciscans' belief that our future can be better than our past, that our city's growth and prosperity can benefit everyday people, that our government can be as innovative, compassionate, and effective as our people. It won't be easy, but few things worth doing are. I am excited to get to work.

Attorney Rafael Mandelman, a gay man, is the supervisor-elect for District 8, which includes the Castro, Noe Valley, Glen Park, and other neighborhoods.