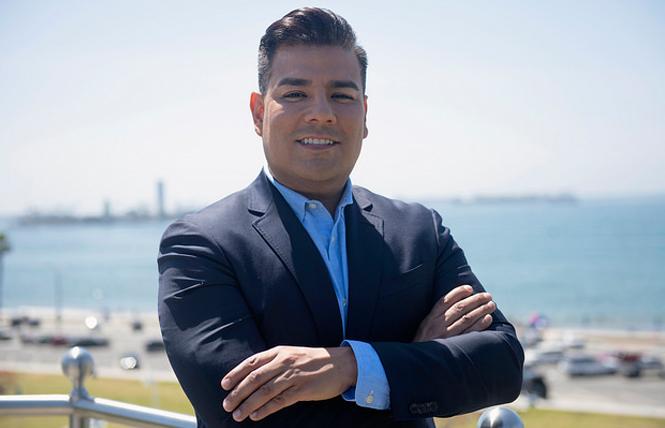 In a statement, Lara said he was "extremely proud" to be the first openly LGBTQ candidate of a major political party to make it to a statewide general election in California. Previous major party out candidates failed to survive their primary races.

"As LGBTQ people, we must fight for our place at the table and show the world we have the right to pursue our dreams!" stated Lara. "I look forward to working together with grassroots leaders to advance a progressive, inclusive, and effective agenda for all and make history in California."

According to the unofficial returns Wednesday morning, Lara was in second place with 40.6 percent of the vote, while Steve Poizner was in first place with 41.3 percent. With more votes to be counted, particularly in Los Angeles County where a printing snafu impacted the ballots of more than 100,000 voters, it is possible Lara could still snag the roughly 23,000 votes he needs to somersault over Poizner and take the lead.

The other Democrat in the race, Dr. Asif Mahmood, landed in third place with 13 percent of the unofficial vote. He had suspended his initial bid for lieutenant governor to instead run to be the state's insurance czar and hammered Lara in television ads.

Poizner, a former Republican who ran as an independent, had been expected to take the lead Tuesday as he formerly held the insurance commissioner position. But he faces an uphill climb in November if Democrats coalesce around Lara. The two Democrats garnered roughly 450,000 more votes than Poizner did Tuesday.

In a Facebook post Tuesday Lara had dedicated his candidacy "to every child who feels lost & different, has been bullied, been told you aren't normal and has taken their life."

In the race for the District 2 seat on the state's Board of Equalization, lesbian state Senator Cathleen Galgiani (D-Stockton) appears to have fallen short of making it to the November general election. She was in third place with 26.2 percent of the vote Wednesday morning. But with more ballots yet to be counted, she could still beat out second-place finisher Mark Burns, a Republican, who had 28.6 percent of the unofficial returns.

Either will face off against San Francisco District 10 Supervisor Malia Cohen in the fall to represent the sprawling tax board district, which stretches from the Bay Area to the state's northern coastal counties. Cohen took first place with 36 percent of Tuesday's vote.

"I look forward to making history in November as the first African-American woman elected to the BOE," Cohen told the Bay Area Reporter Wednesday morning.

She said it was too premature to share her goals for the troubled state agency. Cohen said she was "tired" from staying up late watching the election returns come in, "but extremely grateful for the overwhelming response" from voters to her candidacy. 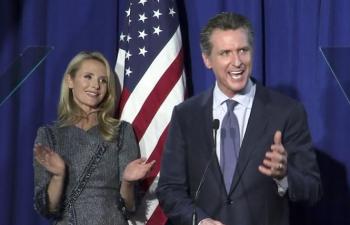 Newsom headed to governor's mansion
Lieutenant Governor Gavin Newsom appears headed to winning the governor's race this fall after taking first place in Tuesday's primary and helping a Republican land in second. It all but assures that the Democrat will succeed Governor Jerry Brown, who is termed out of office this year.

Newsom, who highlighted in television ads his support of same-sex marriage while mayor of San Francisco, was the top finisher in the crowded primary race with 33 percent of the vote. In second was GOP businessman John Cox with 26 percent of the vote.

Landing in a distant third was former Los Angeles Mayor Antonio Villaraigosa with 13.5 percent of the unofficial returns.

In the race to succeed Newsom as the state's second-in-command, two Democrats will square off in November. San Francisco resident Eleni Kounalakis, a former ambassador to Hungary in the Obama administration, was in first place with 23.4 percent of the vote Wednesday morning, while state Senator Dr. Ed Hernandez (D-West Covina) was in second with 20.8 percent.

Secretary of State Alex Padilla appears headed to re-election this fall, as the Democrat came in first place with 51 percent of the vote Tuesday. Republican Mark P. Meuser took second place with 32 percent of the primary vote.

Controller Betty T. Lee also is expected to win re-election come November, as the Democrat took first place Tuesday with close to 61 percent of the vote. Her GOP opponent, Konstantinos Roditis, was a distant second with 35 percent of the unofficial vote.

Democratic Attorney General Xavier Becerra, appointed to the position last year by Brown, is all but assured of winning election to the position in November having taken first place Tuesday with 45 percent of the vote. Republican retired Judge Steven C. Bailey came in second with 25 percent, besting current Democratic Insurance Commissioner Dave Jones, who had 14.5 percent, and fellow GOPer Eric Early, who had 14.9 percent.

In the race for superintendent of public instruction, charter school backer Marshall Tuck took first place with 37 percent of the vote, while state Assemblyman Tony Thurmond (D-Richmond) was in second with 34 percent.

Democratic U.S. Senator Dianne Feinstein appears headed to an easy re-election this fall after coming in first place Tuesday with nearly 44 percent of the vote. In a far distant second was termed out state Senator Kevin de Leon (D-Los Angeles), who garnered 11 percent of the vote.