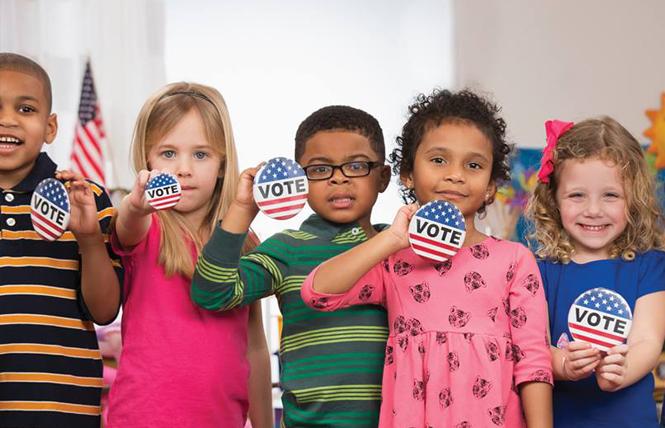 San Francisco voters had a lot on their plate when it came to ballot measures this primary election. They decided to ratify the ban on the sale of flavored tobacco, produce more clean energy for the Bay Area, and leave Taser policy-making in the hands of the Police Commission.

They also decided that tax money will be spent to fund subsidized child care and higher wages for teachers, among other things.

Propositions C and D
Although Proposition D targeting homelessness received more votes, Proposition C, funding subsidizing child care, will go into effect after winning 50.3 percent of the vote. Because Supervisors Jane Kim and Norman Yee gathered signatures to get Prop C on the ballot, it only needed a majority vote of 50 percent plus one. Prop D required two-thirds and only received 44.6 percent.

Because Prop D and C both depended on money from raising the gross receipts tax, only Prop C will go into effect, leaving Prop D to swallow the poison pill.

The Universal Childcare for San Francisco Families Initiative will implement a 3.5 percent tax on commercial landlords, generating about $146 million annually to fund child care and education subsidies for children up to 5 years old and increase wages for early childhood educators and other child care workers.

"This is the first time we have ever provided subsidies to middle-class families who are also struggling in San Francisco," Kim said in an editorial board meeting with the Bay Area Reporter. Kim could not be reached for comment Wednesday morning.

The remaining funds would be used to raise the wages of child care workers.

"[This] is investing in the positivity of our workforce and it's appropriate for employers to invest in their workforce," Kim said.

The losing Prop D would have generated approximately $70 million annually to fund low and middle-income housing and homeless services. The measure included a 10-year funding plan that would dedicate $450 million specifically for resources to lessen homelessness, including navigation centers, transitional housing, supplemental housing, and programs and wrap-around services for mental illness and substance abuse.

Another $350 million was dedicated to middle-income housing, mainly subsidized housing. The remaining $200 million was to fund low-income senior housing and more single-room-occupancy housing.

Tobacco
San Franciscans overwhelmingly reaffirmed the Board of Supervisors' ordinance to ban the sale of flavored tobacco products, including menthol cigarettes and flavored e-cigarettes, by voting yes for Prop E. The measure took 68.4 percent of the vote.

The proposition will uphold the ordinance, authored by Supervisor Malia Cohen, that was passed in April 2017.

"Prop E has made history," she said in an interview with the B.A.R. early Wednesday morning. "The message that I've shared since day one is resonating across California. No more breaks for big corporations while the rest of us suffer."

Cohen and other proponents, including the Campaign for Tobacco-Free Kids, say the sale of flavored tobacco products target minors and minorities, including the LGBT community and African-Americans.

"This will protect kids and keep tobacco out of their hands and out of the retail environment," Cohen said.

R.J. Reynolds Tobacco Company spent nearly a million dollars gathering signatures to get the referendum on the ballot. R.J. Reynolds is the owner of the popular menthol cigarette brand Newport and claimed the ban is harmful to small business owners who sell tobacco products and calls it prohibition.

A group called Let's Be Real San Francisco, which was backed by the Arab American Grocers Association and the American Vaping Association, also led efforts to oppose the ban.

According to early returns, 60.1 percent of voters voted no on Prop H.

Although the commission approved the department's use of Tasers last November - and SFPD is supposed to have them by the end of the year - it did not adopt a policy for their use until March of this year, after the ballot measure was submitted.

Newly-appointed president of the POA, Tony Montoya, a gay man, said he was disappointed with the results.

"It's not the results I wanted," he said in an interview with the B.A.R. early Wednesday morning. "There is still a proposal out there to draft a policy that the Police Commission has had since March. It's time to lift that off the ground and get some conferences set up with the city and see what we can do to put the best policy forward that gives everybody what they need."

The measure was criticized by Police Chief William Scott, who called it "the antithesis of the spirit" of the reforms recommended by the United States Department of Justice after its investigation of the SFPD following several controversial killings by the police.

Former supervisor and leading mayoral candidate Mark Leno and Board of Supervisors President London Breed, also a mayoral candidate, criticized how Prop H undermines the commission's power to make amendments or other changes. If Prop H passed, any changes to the Taser policy would need to be approved by voters or by an ordinance adopted by four-fifths vote of the Board of Supervisors.

"This will stop more evictions in our city than any measure since San Francisco passed rent control," said Dean Preston, the author and official proponent of the measure in a press release. "And it will help San Francisco with its out-of-control homeless crisis."

More clean energy will soon come out of San Francisco with the passing of Proposition A, a charter amendment. It passed overwhelmingly with 75.9 percent of the vote.

Another charter amendment on the ballot that passed was Proposition B, with 69.1 percent of the vote.

Another tax measure that passed is Proposition G, coming in with 59.2 percent of the vote. The $298 parcel tax will be used to fund the San Francisco Unified School District, including increased teacher salaries, staffing, technological advances, and charter schools.

Proposition I
A big disappointment to the homeless man Allen Jones who fought to get the initiative on the ballot is the defeat of Proposition I: a declaration of policy that states City Hall will "not endorse or condone the relocation of any team with an extensive history in another location." The language also asks the city to submit a formal apology to the city of Oakland for wooing the Golden State Warriors, who are constructing a new arena in Mission Bay.

More than half of voters, 57.4 percent, said no to the measure.

"I am not going to give up regardless of the outcome," Jones, who identifies as homosexual, said. He gathered about 14,686 signatures to get the measure on the ballot.

"I will continue to get the message out there that San Francisco is better than taking from their neighbor when they have so much," he said.

The measure did not garner much public support. Only one local media outlet endorsed the measure, the online San Francisco Bay Guardian, and it received support from the San Francisco League of Pissed off Voters.

Opponents of the initiative included David Campos, a gay man who's chair of the San Francisco Democratic County Central Committee. Every member of the committee, except one who voted to abstain, voted for a recommendation of no on Prop I.

"The general sense that people had was that they didn't understand what the point of it was," Campos said in a previous interview with the B.A.R. "If you go to the ballot, there needs to be a point to try and accomplish."

Regional Measure 3
Needing a majority of votes in all nine Bay Area counties combined, Measure 3 looks to be headed for success with 53.9 percent of votes. San Francisco County had the highest amount of yes votes with 64.7 percent.

Known as the Bay Area Traffic Relief Plan, Regional Measure 3 would increase Bay Area bridge tolls (on all but the Golden Gate) by $3 by 2025 to fund $4.5 billion in capital improvements to Caltrain, BART, Muni, and several highways. The measure would add new BART cars, extend BART through downtown San Jose and Santa Clara, expand ferry services, extend Caltrain to the Transbay Transit Center in San Francisco, and add new carpool lanes on the Marin-Sonoma Narrows on U.S. Highway 101, and maintenance.

Unofficial returns showed Regional Measure 3 did not pass in Contra Costa and Solano counties, but it only required a simple majority when all nine Bay Area counties' results are tabulated.