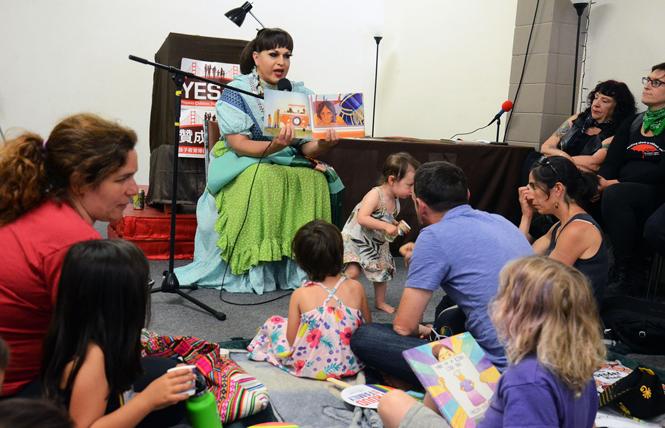 About 30 kids and their parents gathered in the Mission Sunday afternoon for the first Two-Spirit Storytime.

The Pride Month event served as a book launch for "47,000 Beads," a new children's book by Angel and Koja Adeyoha (Eastern band of Cherokee and Lakota). The book tells the story of Peyton, a Native American girl who loves to dance, especially at powwow. When Peyton shares that she can't be comfortable wearing a dress anymore, her auntie Eyota asks some friends for help to get Peyton what she needs.

"47,000 Beads" was read aloud to the kids by drag queen Landa Lakes, who identifies as two spirit. Lakes said there was a reason why she participated in the storytelling time.

"Currently, one of my nephews, age 13, is dealing with his own gender issues," Lakes, a Chickasaw, told the Bay Area Reporter. "I think it would have been great to have something like this during my time growing up. We hope for good things for the next generation so good representation in these kinds of stories can help build self-esteem."

The authors noted that all kids should be able to see themselves in books.

"Visibility of indigenous kids characters is low to begin with," said Angel Adeyoha. "As far as we know there hasn't been a book with a two-spirit kid - everyone deserves to see themselves in print."

Storytime opened with a blessing by two-spirit Elder L. Frank (Tongva/Ajachmem/Rarámuri). Frank chanted in what they referred to as "my language that no one speaks," welcoming everyone into the space. Frank also sang a song about a deer.

The first story in the reading was "Rainbow Crow" by Nancy Van Laan. It's a Native American tale about a rainbow-colored crow that flies to the Great Spirit to ask that the Spirit take away the snow and the freezing cold that was causing all the woodland animals to suffer. The Spirit gives the crow the gift of fire to keep the animals warm, but the crow loses its colors in the process.

"Rainbow Crow" was read by Ruth Villasenor (Chiricahua Apache/Mexican), who, to the delight of the children, donned a rainbow cape and a crow's mask at the end of the story.
Frank, 65, spoke to the B.A.R. about why they participated in the Storytime.

"I try to support our two-spirit community whenever possible," Frank said. "In the Native world we are supposed to think of the seventh generation from us and take care of them. Any one of these kids could be two spirit or be allied with the two-spirit community. We're erasing fear of 'the other' before it starts."

"We always think of the next generation," added Villasenor. "We always make sure our tiny tots return to the circle too."

Renata Moreira, a parent who attended Storytime with her child and who is executive director of Our Family Coalition, an advocacy group for LGBTQ families, said she enjoyed the event.

"We are thrilled to co-sponsor this first of many partnerships with the two-spirit and indigenous community so we can continue to increase the visibility and representation of all members of the LGBTQ2SP community," Moreira said. "It's about touching everyone's hearts and to continue to increase support for people of color and indigenous communities."