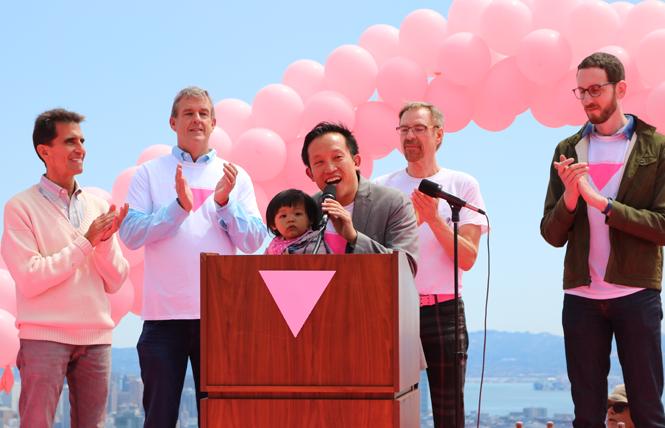 LGBTs and others looking for a unique Pride weekend experience can help install the giant pink triangle atop Twin Peaks.

The 23rd pink triangle display will occur June 23-24. Patrick Carney, co-founder of the project, said that it takes at least 125 people to install the public art, and 50 to take it down after the Pride festivities have concluded.

The pink triangle, now a symbol of LGBT pride, was once used by the Nazis in concentration camps to identify, shame, and persecute homosexual prisoners. Gays were forced to wear the pink triangle on their pockets in the camps as a way to set them apart from other prisoners.

This year's special guest at the 10:30 a.m. ceremony will be new German Consul General Hans-Ulrich Suedbeck, a gay man, along with his husband and two children, Carney said.

Suedbeck is expected to talk about how far Germany has come since the dark days of the creation of the pink triangle, but that people must remember what occurred because all nations do not have the freedom and equality that Germany today enjoys, Carney said in a news release.

The triangle will be installed Saturday, from 7 to 10 a.m. Those interested in helping out should bring a hammer and gloves. People should wear closed-toe shoes and sunscreen. The display consists of 175 bright pink tarps, held in place by nearly 5,000 12 inch long spikes. The display is 200 feet long on each leg and can be seen for 20 miles, as long as Karl the Fog doesn't intrude.

Getting people to help take down the triangle is more challenging, Carney noted, because it follows the Pride parade and celebration. He said that even if people can help out for an hour between 4:30 and 8 p.m. it would be appreciated.

Those installing the triangle will receive pink triangle T-shirts. This year's shirts are being donated by the Bob Ross Foundation, which is overseen by Thomas E. Horn, publisher emeritus of the Bay Area Reporter. (Ross was the founding publisher of the long-running LGBT publication.)

For more information, including directions to the site, visit http://www.thepinktriangle.com.

Organizers with LGBTQ Connection's Calistoga Youth Leadership Team said this is the first family and community picnic event in the town. There is no cost to attend. There will be food, music, and activities. People can bring their own picnic blankets and lawn chairs if they wish.

Later this month, on Saturday, June 30, LGBTQ Connection will hold its Napa Pride Community Cookout from noon to 3 p.m. at Kennedy Park, 2295 Streblow Drive. People should bring a blanket and beverages or sides. LGBTQ Connection will take care of the grill and main dishes (with meat and vegetarian options).

Tickets on sale for Pride Brunch
Tickets are now on sale for Gary Virginia and Donna Sachet's 20th annual Pride Brunch, which takes place Saturday, June 23, from 11 a.m. to 2 p.m. at the Hotel Whitcomb, 1231 Market Street in San Francisco.

The brunch features the San Francisco Pride parade community grand marshals and honorees. It started in 1999 when Virginia, former president of the San Francisco LGBT Pride Celebration Committee board, and Sachet, a community leader and fundraiser, inaugurated the event to raise much-needed and unrestricted funds for the Positive Resource Center.

Now known as PRC, the agency helps people living with HIV/AIDS access disability income, employment, and other services. It has since merged with the AIDS Emergency Fund and Baker Places.

"Our loyal partners, guests, and volunteers love coming together to honor those who have made a significant impact in our community," Virginia said in a news release. "At Pride Brunch, honorees speak from the heart and share stories that resonate and make us reflect on how far we've come. This year marks our 20th anniversary, and we're excited to celebrate with fun surprises."

Tickets start at $75 and can be purchased at https://bit.ly/2LMXIRQ.

Directors looking for talent for Pride doc
A documentary film team is looking for young LGBTQ people who will be attending San Francisco Pride this month and who are interested in possibly appearing in the film.

Portal A, a production company, is currently creating a feature-length documentary about the state of Pride for young LGBTQ people across the U.S.. The film is directed by gay Academy Award-winning directors Rob Epstein and Jeffrey Friedman.

Portal A talent producer Ellie Loarca wrote in an email that filmmakers are especially looking for women and people of color with compelling and developing stories who are participating in SF Pride or any Pride-related events. Filmmakers are expecting to do a shoot at SF Pride later this month.

Those who are interested can complete a submission form at https://www.portal-a.com/wp-content/uploads/2018/05/State-of-Pride-Casting-Notice-San-Francisco.pdf.

There will be a robot dance party at the Bayview Farmers Market Saturday, June 9, at 9 a.m. at All Good Plaza, 1605 Jerrold Avenue.

Other activities include a slow and oak barbecue Thursday, June 14, at Gratta Wines, 5273 Third Street, and a free screening of "Moonlight," the 2017 Academy Award-winning film, Thursday, June 21, at 7 p.m. at the Bayview Opera House, 4705 Third Street.

To RSVP for events, visit the "D10 Pride" Facebook page.

Pulse anniversary vigil planned
June 12 marks the second anniversary of the mass shooting at the gay Pulse nightclub in Orlando, Florida and, locally, community members are planning a vigil in San Francisco.

Gunman Omar Mateen killed 49 people and wounded 53 others at Pulse before he was fatally shot by police. It is one of the worst mass shootings in history. The horror unfolded in the middle of Pride Month on the club's popular Latin Night. Many of those killed and injured were young LGBTQ people of color and allies.

On Tuesday, people will gather at 18th and Castro streets from 6:30 to 7:30 p.m. The event is being organized by those with Day of Decision SF and Castro Community on Patrol.

At press time the schedule of events was still being finalized.

LGBT center seeks hygiene supplies for youth
The San Francisco LGBT Community Center is accepting donations of hygiene items for the participants in its youth program.

Center officials pointed out that the program serves more than 300 youth a year, many of whom are homeless or marginally housed. The center offers food, a warm place to rest, and free hygiene supplies to the youth.

"We are asking any of you who may have travel-size hygiene supplies laying around to please donate these items to our program," the center said in an email to supporters.

The center is also in need of new or unused socks (adult sizes) and underwear (new), all sizes and genders.

There will be a donation bin in the lobby and people can drop off the items during operating hours.

Thursday (June 7) will feature Black Lives Matter co-founder Alicia Garza, a queer woman who is special projects director at the National Domestic Workers Alliance. She will speak at noon.

On June 13, at 6:30 p.m., gay author Darnell Moore will discuss his new memoir, "No Ashes in the Fire: Coming of Age Black and Free in America."

Finally, on Tuesday, July 17, Katie Sowers, a lesbian and assistant coach of the San Francisco 49ers, will speak.

Locations and ticket information are available at www.commonwealthclub.org.

Tenderloin Museum marks three years
The Tenderloin Museum will celebrate its third anniversary with a free community day Saturday, June 9, from noon to 10 p.m. at 398 Eddy Street in San Francisco.

The day will include family-friendly programming at the museum that celebrates the diverse and impactful efforts of the Tenderloin community, both past and present.

Anniversary programming will center around the world premiere of "Tender," a site-specific dance celebrating 100 years of outcast activism in the Tenderloin. It is a multi-year collaboration with Flyway Productions, an aerial dance troupe.

Other activities include a drag queen story hour at noon, a presentation by Larkin Street Youth Services clients at 2 p.m., and Vietnamese traditional folk song and dance at 3. "Tender" will be performed at 8:30 and 9:30, and continues through June 16.

The fair will feature entertainment, carnival rides, concerts, and animals.

The fair runs through June 17. For a complete list of activities and concert schedule, visit https://www.sanmateocountyfair.com/.