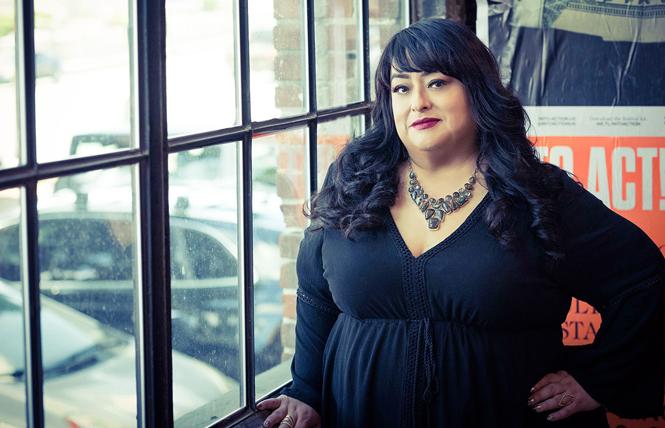 As an increasing number of states legalize cannabis, activist Christine De La Rosa has watched as dispensary owners line their pockets with the profits from cashing in on a high margin product.

De La Rosa, 44, co-founder of the cannabis collective, Benefit Health, to be sure that LGBTQ people, people of color, and the formerly incarcerated don't get left behind, either medically or financially.

Now on a hectic cross-country tour to spread the word about the potential of cannabis to help minority communities, the Bay Area Reporter caught up with De La Rosa at her East Bay bungalow, just before leaving for Portland, where she and her colleagues are doing due diligence on purchasing a dispensary in that location.

"I want to get the message out that the queer community, people of color, and minority groups should have the opportunity to benefit from cannabis as well as partake in the profits," said De La Rosa, a queer-identified femme.

Ten years ago, while she owned a busy event planning company, De La Rosa was working 60-plus hour weeks, "non-stop work," she said.

In excellent health, De La Rosa suddenly became violently ill when she developed two blood clots in her lung and was diagnosed with a severe case of the autoimmune disease lupus.

"I went from being a busy business owner to being a bedridden, depressed patient who was completely unable to get out of bed, let alone hold down a job," she said. "At one point, I was convinced that suicide would be better than living with that level of pain every day."

With a wide circle of friends in the Bay Area, several already involved with marijuana, De La Rosa was encouraged to try holistic approaches to healing, including cannabis.

"I started wondering what my life was going to look like at age 65 if something pretty dramatic didn't change," she said.

She tried various holistic approaches, but none helped, she explained.

De La Rosa then tried cannabis, which she had used "maybe once as a teenager," experimenting with various forms and dosages. She found that capsules of CBD - the non-hallucinogenic cousin of THC, the psychoactive compound found in most strains of marijuana - seemed to be making her feel better than she'd been in ages.

Within nine months, De La Rosa was able to get off all medications except for a 10 mg capsule of CBD daily.

"Cannabis saved my life," she said.

Ready to get back to work, De La Rosa knew that her future "had to involve cannabis."

Looking to obtain a license, the Benefit Health founders received a dispensary delivery license in Oakland under their new name the People's Dispensary, hoping they will be able to continue serving their patient community and eventually get a license for a brick-and-mortar dispensary, said De La Rosa. In the meantime, they have created a limited liability company, or LLC, that enables small investors to put money into that model, which they hope to replicate elsewhere, under the name the People's Dispensary.

In their two years in the cannabis business, De La Rosa concluded that their club was popular because "we welcomed all people, regardless of race, gender, or sexual orientation," she said. "We created a space for everyone to feel safe."

De La Rosa also concluded that the so-called equity program, which was established in Oakland to give minorities a chance to operate cannabis businesses, is "an entrepreneurial program, not real equity," she said.

Although Benefit Health is owned by people who identify as LGBTQ - three of whom are women of color - the organization does not qualify for one of Oakland's four equity licenses, which require that an applicant either has been convicted of a cannabis-related offense in the city or has spent 10 of the past 20 years living in a neighborhood with a high rate of cannabis-related arrests.

"There is no financial support or investment for equity license holders after they get their license," she said, "so we're going to try to provide equity ourselves as a business."

De La Rosa plans to do this by enabling small investors to buy a stake in her company. Most cannabis businesses raising funds currently require investors to be accredited - meaning they have a net worth of $1 million as well as an annual income over $200,000 - she said.

"That pretty much cuts out almost everyone in my community," she explained.
Large investors will also be welcomed, she said, as long as they agree to earmark a portion of the profits to an impact fund that will go back into the community where the dispensary resides.

"Think about how much wealth was created by the tech boom," she said. "Cannabis is larger. It's expected to be a $44 billion market by 2020."

"I'm on a mission," said De La Rosa. "I want to give the LGBTQ community, people of color, and those formerly incarcerated an opportunity to create generational wealth, while at the same time making a contribution to their own community that will affect change at the grassroots level."