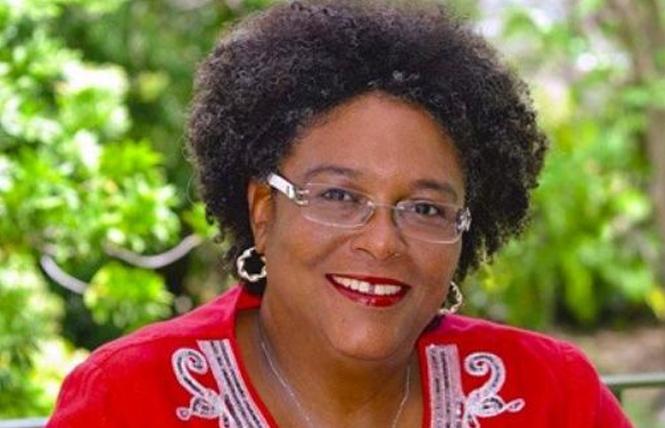 Mia Mottley will lead the Caribbean island country, and her party, the Barbados Labour Party, took all of the seats in parliament.

It's the first time the party has been in power in a decade.

Barbados-born pop star Rihanna possibly gave Mottley a boost at the polls, setting Instagram on fire when she responded to her friend Leandra Goodridge's post claiming Mottley would be the next prime minister.

"Yeeeeeessssss... She deserves it!" Rihanna replied.

Following her win, Mottley thanked Rihanna on Instagram for "all that love and support and blessings."

"Say hello to my new prime minister and most importantly the FIRST FEMALE prime minister of Barbados ... the honorable Prime Minister @mamottley," wrote Rihanna. "Well deserved and about time! Breaking barriers and making history in so many ways!!! Congratulations."

Mottley won despite a homophobic smear campaign in which the ruling Democratic Labour Party questioned her sexual orientation.

The BLP's platform calls for a referendum on LGBT laws, but party members suggested otherwise following the election.

Cynthia Forde told reporters the BLP would not pursue any "gay agenda."

"Nobody in the Barbados Labour Party is interested in any same-sex marriage," she told Barbados Today.

The BLP manifesto added that parliament wouldn't "make decisions on issues that go to the heart of the nation's collective values," reassuring people that LGBT issues will go to a referendum.

But Barbados' LGBT community is hopeful, given Mottley's track record.

In 2001, Mottley commissioned a study on laws that affected HIV interventions when she was the country's attorney general. The study concluded it was critical to overturn the country's anti-sodomy law.

The government's attempts to change the law failed due to strong public opinion against it.

Mottley will serve as Barbados' prime minister for the next five years.

A person identified only by their first name Leonne, 57, brought the case after years of not feeling male or female, even after undergoing sex reassignment surgery, they said. They then attempted to change their gender to a gender-neutral option.

"I am not Sylvester Stallone and I am not Pamela Anderson. I am exactly in the middle," Leonne told RTL. "I am a typical example of a pure hermaphrodite."

A nonbinary gender could legally be marked on a child's birth certificate as "cannot be determined" starting in 1993, but it wasn't retroactive, reported Dutch News.

Anyone born before 1993 could only legally have their gender registered as either man or woman.

A similar application for an unidentified person who wanted to have a gender-neutral birth certificate was rejected by the Dutch supreme court in 2007.

The court's judgment said a person who feels neither male nor female should be able to register their gender identity as such.

"The time is ripe for recognition of a third gender," the court said in a statement, reported Voice of America. The court added that "it is now up to lawmakers" to consider drafting legislation that would formalize a neutral gender.

Born in 1961, as Leon, their parents chose male as their gender identity on their birth certificate. Leonne changed their gender to female in 2001, but it still wasn't right, they explained.

"The court has stuck its neck out and that is big news," Leonne told RSL.

"I am very happy, not only for myself. I have spoken to thousands of transsexuals in my job as a psychotherapist and I did it for them, a little bit, as well," they continued.

Members of the transgender community hailed the court's decision.

"The versatility of gender cannot be registered ... it is time for freedom from sex," he said, referring to the 2014 Transgender Act that clarified that gender identity was the guiding principle for transgender people, not sex characteristics.

Austria and Germany have third gender cases in the courts.

The United Kingdom recognizes a third gender, but the Home Office refuses to put the option on nonbinary individuals' passports. A case against the Home Office for breaching privacy and human rights is currently in the courts.

In the United States, some states - California, New York, Oregon, and the jurisdiction of Washington, D.C. - have passed legislation legally recognizing nonbinary gender individuals with an "X" on government issued identification.

Vermont and Washington state are moving forward with similar legislation.

Dana Zzyym, a nonbinary individual, sued the U.S. State Department to obtain a passport with a "Gender X" demarcation. The case is still in the federal courts.

Some countries like the Philippines and Thailand informally recognize a third gender.

The snap election was announced by Turkish President Recep Tayyip Erdogan in April.

The People's Democratic Party, a left-leaning political party, included Atik on its list of candidates for a seat in the northwest province of Edirne, according to media reports.
Atik's goal is to uplift LGBT rights and equality.

"Among the most urgent demands are the right to live. We will fight issues such as stigma and discrimination, which are [happening] heavily in Turkey," he told Hornet. He also plans to fight against hate crimes, sex education, and for HIV/AIDS programs.

The political party is known for supporting minority groups. It was the first political party to nominate openly LGBT candidate Baris Sulu for parliament in 2015. That same year, the Republican People's Party, the main opposition party, had two transgender women on its state for office, reported Gay Star News.

Turkey's LGBT rights record has been dismal in recent years.

There have been reports of violent police attacks on Pride parades and bans on LGBT events; detainment of LGBT community leaders, and many murders of transgender women that have gone unprosecuted.

"[Turkey has] an increasingly authoritarian government attacking democracy and curtailing the rights of Turkish citizens exercising their rights to expression and assembly," said Stern in a statement earlier this year.

The attacks on the country's gay community are a turn from the country's decriminalization of homosexuality during the Ottoman Empire in 1858. At one time Turkey became the second Muslim-majority government to create pro-LGBT laws, according to OutRight.