Jock Talk: Send the NFL your hopes and prayers 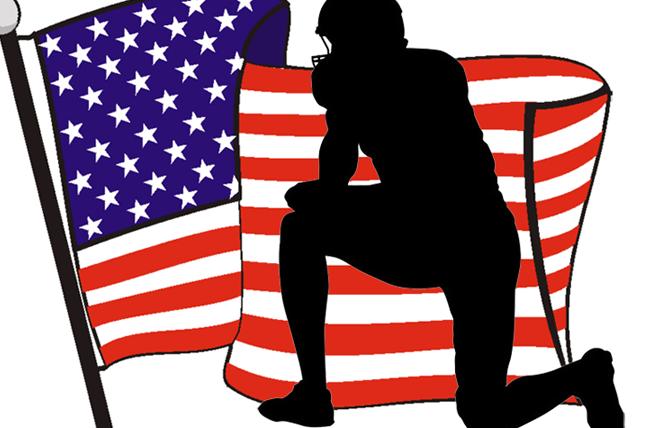 The NFL has enacted a new policy forbidding players from kneeling during the national anthem.

Just what we need: another reason not to watch NFL football.

It's no secret that television ratings for the National Football League, the bloated behemoth atop the American professional sports scene, have been slipping. Collateral issues such as the domestic violence instances that besmirch its image, its tepid responses to increasing evidence of longtime brain damage from routine plays, defiant continued use of racially insensitive team names - such are the kinds of issues that have been turning fans off and convincing them there are better ways to spend their time and dollars.

This week, fumbling to address fan alienation, the NFL decided to ban the silent pre-game protests against police violence that spread across the league's stadia last season. You know: the players who kneeled during the playing of the national anthem after 49ers then-quarterback Colin Kaepernick set the example, players kneeling in solidarity or locking arms, the mostly African-American players' expression of grief and anger over senseless killings that was so powerful the vice president flew cross country at taxpayer expense so he could make a show of walking out on it without staying for the game - all of that consciousness-raising activity has now been banned by the NFL in the same breath it says it is doing everything it can to help its players raise awareness.

In other words, alarmed by the respectful act of kneeling, the NFL is opting to bow to political pressure.

Commissioner Roger Goodell said the new policy requires that on-field personnel - including any players on the sideline - during the playing of the anthem must stand and show respect for the flag.

Goodell said the policy was approved by a unanimous vote of team owners, but that was a lie. Turns out there was no formal vote. The owners were told what the policy was and then were asked to approve of it with a show of hands. Owners for the 49ers and the Raiders said they abstained. The Jets owner said he would repay players any fines they accrue.

It is highly unusual for such a sweeping policy to be put in place without a full discussion and formal vote.

"This was more of a desperate attempt by a group of owners to simply 'get back to playing football' rather than to honestly, and with a sense of what America means, sit down and figure out what's the right thing to do," said DeMaurice Smith, executive director of the players union. "What I think they did was they sat down and tried to figure out 'what can we get away with as quickly as possible?"

While his Golden State Warriors were successively battling through a seven-game NBA conference finals with the Houston Rockets, coach Steve Kerr took time to criticize the NFL's new policy as a misguided reaction to protest.

"I think it's just typical of the NFL," Kerr said. "They're just playing to their fan base, basically trying to use the anthem as fake patriotism, nationalism, scaring people. It's idiotic. But that's how the NFL has handled their business. And I think our leadership in the NBA understands that when the NFL players were kneeling, they were kneeling to protest police brutality, to protest racial inequality. They weren't disrespecting the flag or the military. But our president decided to make it about that and the NFL followed suit, pandered to their fan base, created this hysteria. This is kind of what's wrong with our country right now. People in high places are trying to divide us, divide loyalties, make this about the flag as if the flag is something other than what it really is. It's a representation of what we're about, which is diversity, peaceful protests, abilities, right to free speech. It's really ironic, actually."

The NFL policy is silent on the fines to be imposed, so now we must see how perceptions play into the inevitable confrontations and flaunting of the rules that will follow. How much will kneeling cost? Will fines increase for repeat offenders? Will fines vary by the race of the kneeler, or be increased by accompanying pre- or post-game remarks? Will the fines be the same if instead of kneeling the players sit or lie down or raise their fists?

Hey, what do you know - maybe the NFL will get lucky and folks who are turned off by the violence of the game will tune in to watch the demonstrations and counterdemonstrations.

First, the NFL's attempt to stifle the demonstrations feeds into the current political climate of inflamed racial tensions. It widens a divide. It stirs the pot. There is no way this will not be viewed as yet another attempt by white corporate America to stifle the protests of black laborers.

Second, the policy turns the dialogue away from the topic of violence and discrimination, away from the militarization of police forces and the repeated fatal and unjustifiable use of excessive firepower against persons of color, and on to the topic of protests during the anthem. It casts patriots who express their concern about the health of the country the flag represents in the role of non-patriots. It expresses an intolerance that is antithetical to the freedom that flag epitomizes.

Who knows? The owners may end up longing for the good old days when players, by silently kneeling during the anthem, showed both their reverence for the country and their desire for it to become less violent. You know, when standing or kneeling for the anthem was a matter of choice, a matter of free will, and a matter of genuine patriotism.