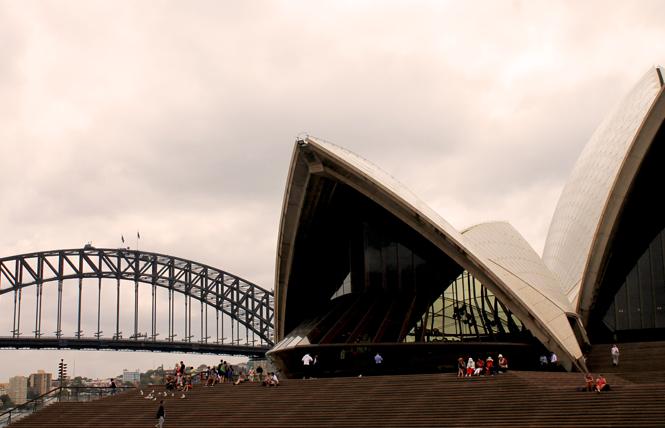 The iconic Sydney Opera House, with the Sydney Harbor Bridge in the background, is a must-visit for tourists. Photo: Heather Cassell

There's something special about Sydney when it's winter here, and fall down under. I traveled there earlier this year to cover the 40th Gay and Lesbian Mardi Gras, but also had time to take in other activities.

Mardi Gras is a huge LGBT event, but the city offers plenty of things to do, from shopping and dining to checking out the gayborhood.

As I arrived in late February, the water in the harbor was glistening as the ferries shuttled from the Circular Quay near the famed Sydney Opera House, where tourists took their obligatory selfies in front of the modernist architecture that has defined the Australian city for nearly 45 years.

It was a beautiful scene as people strolled along the promenade and dined along the waterfront with the Harbor Bridge and Opera House in the background.

Excitement was also in the humid air, as people from cab drivers to Sydneysiders (what Sydney residents call themselves) I spoke with throughout the week all said it was a rare occasion when the Sydney Gay and Lesbian Mardi Gras (http://www.mardigras.org.au) hadn't seen rain.

Sunshine was the only forecast for the estimated 300,000 festivalgoers from around the country and the world descended upon Sydney to celebrate Mardi Gras' 40th anniversary in February and early March and Australia's passage of same-sex marriage, according to event organizers.

I was one of those celebrants as a guest of Visit New South Wales (http://www.visitnsw.com) and Qantas Airways (http://www.qantas.com/us/en.html), which I flew nonstop on the 14-hour flight from San Francisco to Sydney. 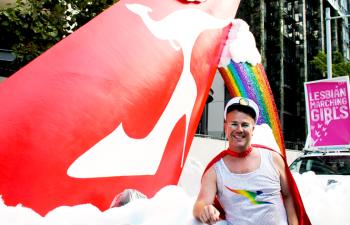 "Marching for Qantas brings me so much joy," wrote Michael James, 39-year-old gay Sydneysider who is the Mardi Gras parade director for Qantas, in an email interview. "It makes me happy to see everyone's face light up when they see us coming."

James is a 12-year Qantas veteran who for four years has headed up the airline's Mardi Gras float, #RainbowRoo, and the hundreds of participating employees, he told the Bay Area Reporter.

The March 3 parade was followed by a sold-out Mardi Gras after-party headlined by Cher in Moore Park that lasted until 8 a.m.

However, many Mardi Gras partygoers were disappointed that they didn't get into the Hordern Pavilion where Cher performed.

Outside the concert hall, only one screen at the entrance to the gates showed Cher's 20-minute performance.

The disappointment gave way to Cher announcing a full arena tour of Australia in September and October, reported Time Out Sydney.

Many of the Mardi Gras events were sold out, but that didn't stop me from enjoying festivities throughout the city. I was able to attend events nearly every night, from the Bearded Tit (http://thebeardedtit.com), a lesbian-owned bar in the Redfern neighborhood, to the annual Planet Dwellers Mardi Gras Sunset Cruise (https://planetdwellers.com.au/mardi-gras-sunset-cruise-2018).

It was an exciting night at the Bearded Tit as it was the site of the premier party of "Black Divaz" (www.pursekey.com.au/black-divaz) at the Mardi Gras Film Festival in Sydney. The hourlong documentary follows five indigenous Australian drag queens' journeys as they compete for the crown at the inaugural Miss First Nations drag queen pageant.

The queens in the film took the stage at the Bearded Tit for a knockout performance before a packed house.

"Being queer, I love being able to offer a space for more alternative/punk expression and be a home for queer activism," Joy Ng, a 39-year-old queer woman who owns the Bearded Tit, wrote in an email interview with the B.A.R.

The party was also all along Oxford Street at the Stonewall Hotel, one of the longest-running gay bars in Darlinghurst neighborhood, the Colombian Hotel (http://colombian.com.au), and the Oxford Hotel (http://www.theoxfordhotel.com.au), right at Taylor Square where the community gathers. 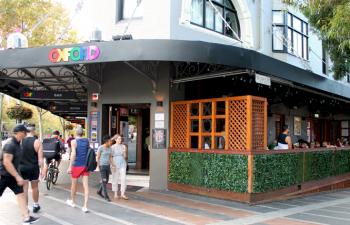 The Darlinghurst neighborhood was alive with excitement leading up to the 40th annual Sydney Gay and Lesbian Mardi Gras parade in March. Photo: Heather Cassell

Exploring Sydney
Sydney has changed quite a bit since my last visit six years ago, and the LGBT community is prouder than ever. However, the gay neighborhood has changed. Businesses have shuttered on some blocks and new businesses that aren't necessarily gay-owned, but are gay-friendly, moved into empty storefronts on other blocks along Oxford Street, Mario Paez, my guide on the Sydney Gay Village Walking Tour (https://planetdwellers.com.au/pd-tours), said as he pointed out buildings once occupied by a gay-owned business.

Paez is also co-owner of Planet Dwellers, a gay travel agency. He noted the battle to keep the neighborhood gay with permanent fixtures of rainbow flags, rather than the rainbow colors that go up only for Mardi Gras, is ongoing.

It was the sign of the times in the rapidly changing city.

The city's food scene was on fire with new, innovative restaurants. There's also shopping and a series of festivals throughout the year thanks to the mild daytime temperatures that generally reach around 80 degrees Fahrenheit at the highest and around 60 degrees at the lowest.

My first stop was at the Opera House, where I walked around and took the history tour again. The iconic building will be closed for major renovations starting in mid-2019.

After that, I took a Mardi Gras Sunset Cruise. The cruise was one of the hundreds of parties hosted throughout the week leading up to the Mardi Gras parade and after-party. The cruise included drag performances by Coco Jumbo and a dance party where DJ Amanda Louise spun dance anthems on the water as the boat circled the harbor.

Away from the Mardi Gras action, I spent a day at Bondi Beach (http://www.bondivillage.com), the city's most popular beach, and strolled along the popular Bondi to Bronte Coastal Walk. Bondi Beach is also home to the popular Icebergs Dining Room and Bar, with its saltwater pool that overlooks the ocean, and the Bondi Farmers Market.

The city has many parks that make for great walks and cafes to stop in to relax and enjoy the scenery.

Dining, shopping
Perhaps the most fun I had was simply walking, shopping, and eating my way through Sydney.

I took some time to explore Sydney's popular markets, such as the Rocks Market (http://www.therocks.com/things-to-do/the-rocks-markets.aspx) near the Harbor Bridge; while at the beach I shopped at the Bondi Farmers Market (http://bondimarkets.com.au), held every Saturday. On another day I came across the Fitzroy Gardens Market at Kings Cross.

I also explored the shops in the Paddington, Darlinghurst, Surry Hills, and Potts Point neighborhoods.

To get my days started right, Sydney offered many great breakfast and brunch spots. I really enjoyed dining by the paddocks, sipping coffee, and eating a fresh crab omelet at Seventeen (http://www.17.com.au). And I watched people walk by at the fun and wacky Cuckoo Callay's (http://www.cuckoo-callay.com.au) as I ate my egg and blue crab cake in Surry Hills. I had a delicious blueberry ricotta hotcake at Harry's, a fun spot at Bondi Beach.

My afternoons and evenings weren't much different. I lunched at Hacienda (https://haciendasydney.com.au) near the Opera House, and China Doll (https://chinadoll.com.au) at Woolloomooloo Wharf.

The highlights of my dining adventure in Sydney were lunch at Saint Peter (http://www.saintpeter.com.au) and Fred's (https://merivale.com/venues/freds), both in the Paddington neighborhood.

Josh Niland, the fresh-faced chef and owner of Saint Peter, gives a whole new meaning to how to use not only every piece of the fish, but leftovers too. In just 10 months, at 28 years old, he's perfected an art and inspired Australia's sustainable food movement with his hot new restaurant. The food was amazing; it's no wonder that Niland has been named one of the country's Top 10 Chefs, by Australian Financial Review.

Fred's is a classic French restaurant reminiscent of the French countryside. The cooks prepare the food in an open kitchen in the middle of the restaurant, while diners enjoy the plates brought to them. The atmosphere is warm and welcoming, and the food is delicious.

My other favorites were Bea at Barangaroo House (http://www.barangaroohouse.com.au/bea-restaurant) and the aforementioned Icebergs (https://icebergs.com.au). Both delivered exceptional food and service with amazing waterfront views.

The only restaurant I dined at that I wasn't a fan of was Mjolner Eathouse (https://mjolner.com.au/sydney), a Thor-themed restaurant that was fun, but the food was disappointing. It's never good when the sides and wine outshine the main dish.

Where to stay
At the end of my daily walkabout, I rested at the Larmont Sydney (http://www.lancemore.com.au/larmont), a boutique hotel perched on the top of a hill at Kings Cross in the Potts Point neighborhood, where Mardi Gras began. The view and service were beyond excellent.

For two nights I was neighbors with Australian actor Russell Crowe at the Ovolo Woolloomooloo (http://www.ovolohotels.com.au/ovolowoolloomooloo), staying in a 1.5-bath loft suite (Crowe has a condo there). The luxury hotel right on the paddocks below Potts Point in the upscale Woolloomooloo neighborhood was quiet and residential compared to the Larmont. However, the staff service wasn't quite as warm and welcoming as my experience at the Larmont.

Getting around
Getting around Sydney is easy, but finding your exact location is slightly off. It's a major metropolitan area filled with car services, taxis, Uber, and a good public transit system with underground trains and busses.

My only issue was that buildings aren't numbered with the level of accuracy and detail North Americans are used to. Just look to the left or the right of where you are supposed to be, about five or 10 feet, and you should be able to find the right place.