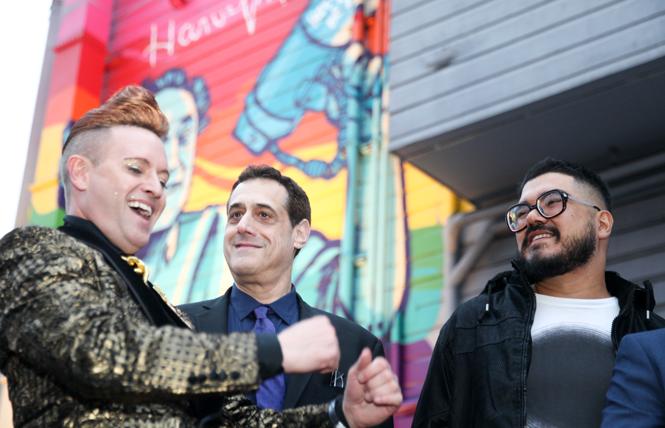 In celebration of Harvey Milk Day, Tuesday, May 22, Stolichnaya vodka revealed a new mural dedicated to the late political activist, elected official, and gay rights pioneer. During an outdoor ceremony at the Cafe nightclub at 18th and Castro streets, nearly 100 people gathered to witness the unveiling.

In addition to the mural, Stoli also premiered a limited-edition vodka bottle with the mural's image as the label. The bottle features a portrait of Milk holding a megaphone that reads, "Hope will never be silent." The art was inspired by the work of Paraguayan artist Oz Montania.

Montania was flown to San Francisco by Stoli USA, where he recreated the mural that he had painted in 2013 inside the Paraguayan LGBT Community Center in Asunción.

This limited-edition bottle, Stoli's first-ever LGBTQ-themed product offering, commemorates the 40th anniversary of Milk taking office as a member of the San Francisco Board of Supervisors in January 1978. He was the first openly gay elected official in California and San Francisco.

Stuart Milk, Harvey Milk's gay nephew and co-chair of the Harvey Milk Foundation, spoke during the event moments before two rainbow flags were pulled away to reveal the mural. A global nonprofit, the foundation was founded in 2009 by Stuart and Anne Kronenberg, Milk's campaign manager.

"Stoli is very passionate about supporting the LGBT community," Stuart Milk said. "This mural does a wonderful justice to my uncle's vision and dream, that people can live authentically, without a mask.

"My uncle knew he would be assassinated and he knew the bullets had the opportunity to destroy our invisibility to take off masks and all the lies and myths about LGBT would be heard," Stuart Milk added.

Russell Pareti, Stoli's vice president of marketing, also addressed the crowd to speak about Stoli's presence in the LGBTQ community.

"Like Harvey, we consider ourselves icons in the LGBT community," Pareti said. "If we ever do something to support the community, we want to do it in a new way. We hope Harvey is proud of this bottle."

Pareti said the mural is a "beautiful work of art that represents progressiveness and equality."

Proceeds from the limited-edition bottle will be donated to the Harvey Milk Foundation to support its LGBT programing in Eastern Europe and the Baltic nations.

Montania, an LGBTQ ally, said the mural represents the freedom to be authentic.

"For me it's an honor to be part of this project and tribute," Montania said. "It all started in my country and now we're closing the circle with this mural. Don't take this for granted. What you achieved here [in the Castro] is something amazing and most of the world doesn't experience this."

Stuart Milk added that in many places around the world, LGBTQ community centers are simply clubs and bars and he's proud of the passion behind this mural and bottle.

"There are young people having that [coming out] talk at the kitchen table," Stuart Milk added. "I guarantee you, a young person will see this mural and get the strength to have that kitchen table conversation and claim their authenticity." 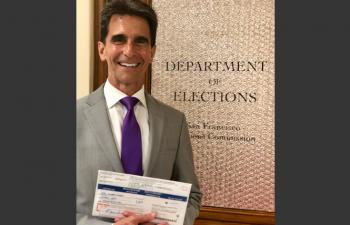 In other Milk Day news, gay San Francisco mayoral candidate Mark Leno voted at City Hall. Leno authored the bill that established Harvey Milk Day in 2009 when he was in the state Senate.

Leno's campaign announced that it will air a 60-second ad over most local stations at 6:58 p.m. Thursday, May 24. Leno is in a tight race for mayor with Board of Supervisors President London Breed, and District 6 Supervisor Jane Kim.