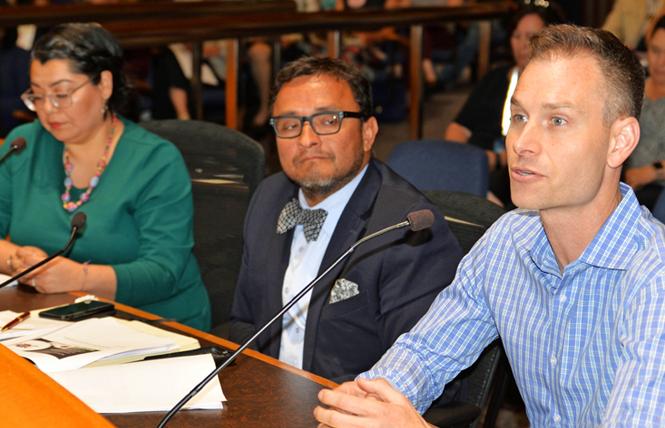 A homeless shelter for LGBTQ people in Santa Clara County is one of several recommendations that are expected to go before the Board of Supervisors in June for funding in next year's budget.

At a May 9 public hearing of the county's Children, Seniors, and Families Committee, the Office of LGBTQ Affairs presented a recommendation for an LGBTQ-focused homeless shelter and specialized transgender support programs.

The committee also heard a proposal for a new Division of Equity and Justice. It would be charged with overseeing the work of the Office of Cultural Competency, Office of Immigrant Relations, Office of LGBTQ Affairs, and Office of Women's Policy.

A special report released ahead of the hearing recommended the creation of 10 new positions to support the Division of Equity and Social Justice.

About $3.2 million in additional funding is being sought.

The top priority community members brought to government leaders was the need for a specialized LGBT homeless shelter and helping victims of domestic violence.

A group of queer youth, whose members didn't want to be identified, described their experiences of being kicked out of their homes and struggling to survive by sleeping on friends' couches, working, and continuing to go to school.

The Office of LGBTQ Affairs also identified the need for specialized transgender support programs and LGBTQ support for families with children under 13 years of age.

The Board of Supervisors will head into June's budget discussions with an aim to target a nearly $3.2 million in additional funding for programs and services focused on hate crimes, immigration, and women's issues, according to gay Deputy County Executive David Campos.

Supervisor Cindy Chavez, who led the CSFC hearing along with Supervisor Dave Cortese, said the board would examine the proposed budget and an additional report on intimate partner violence during the budget process in June.

She also assured the nearly 300 people who filled the board chambers at the County Government Center at the hearing that funding, particularly for domestic violence, wasn't being cut. She told community members the board was looking at expanding resources for domestic violence and examining "more appropriate investment" of those resources.

Chavez added that contracts that were due to expire were going to be extended for another 90 days to allow for conversations to happen between the county's executive office, specialized offices, community organizations, and funding partners.

The report
Campos presented the report, "Comprehensive Report on Special Hearings on Immigration, Women's Issues, and Hate Crimes and Climate," and an accompanying working plan with recommendations for implementation.

"We are going to continue to do everything we can to resist against the hatred and divisiveness that comes out of [President Donald Trump's administration]," Campos said.

The County of Santa Clara isn't "afraid to stand up to the Trump administration," he added.

Campos noted the county filed two lawsuits against the Trump administration within the last few months.

"This is not just about fighting Trump but creating a proactive agenda that goes beyond Trump and tries to ensure the success of every member and every one of our residents," he said. "We are proud to be part of a county that understands that we are stronger when we are together."

Campos was joined by the directors of the Office of Cultural Competency, Office of Immigrant Relations, Office of LGBTQ Affairs, and Office of Women's Policy as they each presented their recommendations based on the findings of the report.

The report was published May 8.

Some of the work has already begun. In February, the Office of LGBTQ Affairs launched a 10-city listening tour, the Bay Area Reporter reported.

Meetings hosted in partnership with city government leaders and organizations have been held in Mountain View and Palo Alto this year.

Officer James Gonzales, a gay man who is the LGBT liaison for the San Jose Police Department, testified at the hearing that the department has launched an LGBT advisory board under the guidance of Police Chief Edgardo "Eddie" Garcia. He added that his office is also working with the Office of LGBTQ Affairs.

That doesn't mean that attacks against LGBT individuals in the South Bay don't happen. Gonzales told the board that hate crimes against LGBT people in the city are underreported.

The community advisory board on LGBTQ issues, made up of department employees and community members, is working to address hate crimes, traditional law enforcement responses, and community-based responses to crimes.

Gonzales said that he is looking at Seattle's police department, which has developed a comprehensive program between the police and the LGBT community, as a model for San Jose.

"Seattle has done a lot of work in this area, and we are studying that model," he said, noting that it was clear that a comprehensive approach is working. "Where the community is part of that response, where business, the county government, even the federal level ... everyone is working together."

Maribel Martinez, director of the county's Office of LGBTQ Affairs, added that the issues within the LGBT community "existed before the presidential election of 2016."

"However, what has changed since then is the urgency to which we have to respond," Martinez told the supervisors. "What has also changed is the frequency of and intensity of the explicit overtness of the hatred being propagated in our communities as bullies have become increasingly emboldened."

She pointed out that addressing issues within the LGBT community has long been underserved and that in many settings talking about sexual orientation and gender identity are "still taboo."

She noted that the scarcity of resources in addition to rising fear compounded the issues.

You "can begin to understand the challenges and barriers faced by this community," she said, appealing for support for the recommendations in the report.