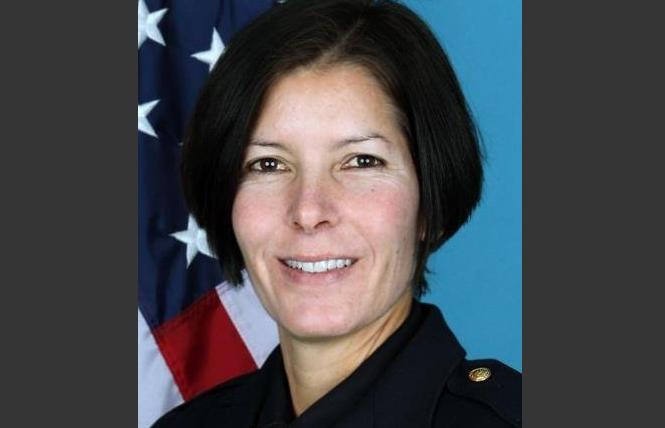 The city of Fremont announced Monday that Kimberly Petersen has been named its new police chief, making her the first woman and lesbian to lead the department.

Petersen, 48, will take over the role July 26, when current Police Chief Richard Lucero retires after 31 years.

"I am honored to have the opportunity to lead this extraordinary team of people who dedicate their lives to protecting the city of Fremont," Petersen said in a news release. "I am grateful to be part of such a distinguished agency within a supportive community."

Petersen has been with the police department for more than 20 years, currently serving as a captain, which she has done for the past five-plus years. She will oversee the entirety of the department of more than 300 full-time employees, of which 197 are sworn positions.

The soon-to-be chief spoke with the Bay Area Reporter on the phone Tuesday and said she is proud to be taking over the position.

"It's an honor to be leading this amazing and dedicated group of people," she said of her peers. "I'm really looking forward to continuing our momentum in this community."

The first order of business will be to learn the rules and do a lot of listening, she said. Although Petersen said it was too early to express her goals for the role, she said the biggest challenges facing the department is the issue of homelessness in Fremont, as well as other Bay Area communities, something she will focus on as chief.

She also plans to hire around 30 or 40 new officers over the next few years due to retirement among employees and is excited to bring on the next generation of officers and, "bring them up to our brand of professionalism."

When asked about relations between the LGBT community and the FPD, she said, "I never felt like that's been an issue here. What is beautiful about our officers is they treat [LGBTs] like anyone else, with the same humanity and self-respect. I'm proud of that."

Congratulations came from many, including Fremont Mayor Lily Mei, who said Petersen represents the diverse community of Fremont.

"Captain Kimberly Petersen is a highly qualified candidate reflective of the Bay Area's demographics where Fremont is an inclusive, diverse, and welcoming community," Mei wrote in an email to the B.A.R.

Tiffany Woods, program manager for transgender services at Tri-City Health Center in Fremont, said in a tweet, "Congratulations to the new Fremont Police Chief Captain Kimberly Petersen. The first female and openly gay chief in the department's history. I met her three years ago, and she is [a] leader and a great choice."

Her appointment was announced by Fremont City Manager Fred Diaz, who said in a statement, "Kim has a high degree of intellect that will lend itself to Fremont's unique community attributes and two complexities. She's also bright, creative, and articulate, all of which will serve her well as she leads the department and community in the years ahead."

Diaz also commended Petersen's long-standing and diverse background with the department and said she "possesses the tactical and technical knowledge of police work."
Throughout her history with the department, Petersen has been an officer, detective, sergeant, and lieutenant prior to her current position.

She was the department's first female SWAT officer, a role she made a mark on with her creation of the Tactical Emergency Medical Support Team, which she led for four years. Recently, she also created the Training Dog Program and the Mobile Evaluation Team, a newly created unit and partnership between the FPD and Alameda County Behavioral Health.

Petersen is also a mom of three children, which she shares with her wife of 16 years, who is a former police officer with the Los Angeles Police Department. Coaching soccer is a passion for both of them and are currently are coaching baseball for their youngest child. The family lives in Santa Cruz.

Petersen was one of four police captains who sought the position in the internal recruitment. Her salary will be $244,000 plus benefits, which will be around $120,000, according to the police department's Public Affairs Manager Geneva Bosques.

Fairfield's out police chief settles into the role
Sign up!