Panel looks at queer youth, past and present 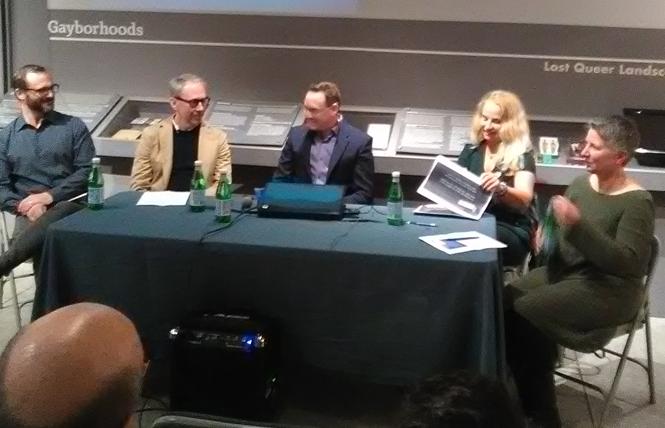 French and American panelists took a look back at history and kept an eye on the present during a presentation on the lives of queer youth in the two countries.

The May 17 discussion was a collaborative effort between the GLBT History Museum and the French Consulate.

Talking about the historical perspective were Don Romesburg, a gay man and professor of women's and gender studies at Sonoma State University, and Michael Lucey, professor of French at UC Berkeley who identifies as queer. The present and future were discussed by Jodi L. Schwartz, the queer longtime executive director of the Lavender Youth Recreation and Information Center in the Castro, and Clare Hart, a straight ally who works at Le Refuge, a similar organization in France.

Past centuries also found youth turning to hustling as a means to get ahead.

"Working-class boys had chances to engage in sexual adventures, which were sometimes monetized," Romesburg said. "Heterosexual boys who wanted to take girls out needed money - they could make money by having sex with men."

But things changed as the century progressed. "By the 1920s and 1930s there was a real attempt to clamp down on gender variance and homosexuality," Romesburg said. "The 1930s until the 1960s were the worst years, but those were the years that gay movements began to emerge."

Romesburg noted that into the 1970s homosexuality was viewed as a phase that people could "pass through." It was in the 1980s and 1990s that youth movements emerged.

Lucey discussed the way misunderstandings arise between people who have difficulty accepting that they do not share the same experience of sexuality. It is severe misunderstandings of this kind between parents and children that create the need for organizations like LYRIC and Le Refuge.

"Historians of sexuality need to be aware of this kind of problem as well," he said. "When you imagine the sexual experience of someone in the past, how do you loosen the hold that your own sexuality has on your way of understanding the world enough to be open to the possibility of a difference you might not even suspect from your own experience of sexuality?"

Lucey used the examples first, of a number of men who lived together as couples in mid-19th century France and the way their contemporaries reacted to them, and, second, of the reactions of different public figures, including the writer Colette, to women in early 20th century France who had elective mastectomies for a variety of different reasons.

"The sexuality of others when different from ours elicits strong feelings," he pointed out.

Schwartz and Hart talked about the work that each of their organizations does in support of queer youth, many of whom face homelessness and poverty after rejection from families. Some have substance abuse issues while others are forced into sex work in order to survive. Schwartz noted that 68 percent of queer youth are now homeless or unstably housed due to the housing market.

"As homelessness escalates we've seen escalating exposure to violence," said Schwartz. "The mission of LYRIC is to build community and to inspire positive change - not just to meet basic needs, but to make lives better."

A diverse community is served by LYRIC, she noted.

"LYRIC represents a wide range of gender and sexual identity," she said. "The life experiences of LGBTQQ youth are diverse and complex. Most LGBTQQ youth have faced experiences of rejection and judgment because of who they are. At LYRIC, our role is to love all LGBTQQ youth for who they are. We meet youth where they are at, partnering with them to reduce any harm they are facing and supporting them in a life path that will ensure that they thrive as healthy and happy individuals as part of a community that loves them for who they are and to which they positively contribute."

"We're doing the same thing as LYRIC," said Hart, who noted that Le Refuge has existed for 15 years. "How wonderful it would be if we didn't have to exist anymore, but we exist because LGBTphobia exists.

"The aim is to fight against suicide and isolation," she said of the youth center. "Suicide among LGBT youth is very high. We encourage them to spend time together. We go into schools and talk to young people, particularly in deprived areas. We also talk about racial inequality."

For kids who are part of Le Refuge programs, there is a structure to each day. "A time to get up, to dress, and to be home by a certain time," Hart said.

Love and support are the primary components that Le Refuge seeks to bring into the lives of the youth it serves.

"We're letting them find themselves," Hart said. "We're encouraging them to love who they are, then they can meet other people and spread the love."

"The structure of the panel was well thought out," said Arthur Corbin, who attended the event. "An introduction to our history from romantic friendships that may or may not have been sexual, male prostitution as an economic springboard for poor and working class young men to a better life and marriage, how LGBTQ identities evolved, how the stereotyping of LGBTQ identities with false assumptions led to conversion 'therapies,' witch hunts, violence, and sometimes death. And the continuing crisis of LGBTQ youth in both France and the U.S."

Corbin said that he found the evening instructive.

"It was informative learning about the concepts and practices of sexuality in the 1800s and 1900s, particularly male prostitution as a vehicle to heterosexual marriage in the 1800s; the ideal of passionate romantic friendships between men and women; the development of LGBT identities in the early 1900s; and the similar work of the French youth group Le Refuge, and the local LYRIC," he said.