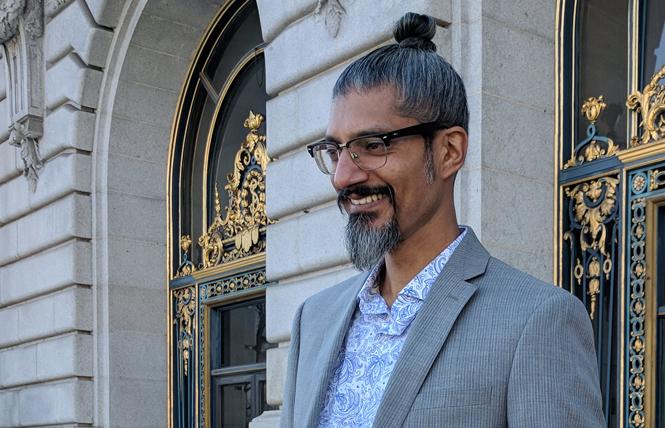 Burning Man attendees known him as a DJ for the Gender Bender camp. Privacy and free speech activists likely have gotten to know him through his work with the Electronic Frontier Foundation and the Bill of Rights Defense Committee.

Marriage equality advocates might remember him as part of the legal team that defended Jason West for breaking New York's marriage laws when he wed same-sex couples in 2004 as the then-mayor of New Paltz.

Now Shahid Buttar is aiming to gain national attention as the person San Francisco voters choose to challenge House Minority Leader Nancy Pelosi (D-San Francisco) in the June 5 primary. He is one of three Democrats, as well as a trio of other candidates, waging an uphill battle to unseat Pelosi come November from California's 12th Congressional District.

"I will take second place. I have no doubt on it," a confident Buttar told the Bay Area Reporter in a recent interview about his candidacy. "The others are not as prepared to do it. I am as deep on policy issues as the incumbent, if not more."

Pelosi is widely expected to take the number one spot in the June primary, where the top two vote-getters will advance to the general election in November. Also on the ballot are Republican educator Lisa Remmer, Green Party member Barry Hermanson, and independent lawyer Michael Goldstein.

The two other Democrats are lawyer Stephen Jaffe and UC Hastings College of the Law student Ryan A. Khojasteh. Leading up to the primary, Buttar and Khojasteh have garnered support from more progressive Democratic clubs and leaders in the city.
Should he advance past the June primary, Khojasteh hopes his candidacy, and the fact that he is the son of Iranian immigrants, will attract national attention.

"Our team is feeling energized and optimistic heading into the final stretch of the campaign," he told the B.A.R. last week. "Thanks to the hard work of a dedicated group of young people, we have reached more voters than any other challenger in the race, secured the most endorsements, and our message of unity around a common vision for the future of the Democratic party has resonated. We are looking forward to upsetting expectations on June 5 and engaging Minority Leader Pelosi in a thorough contest of ideas."

Buttar, 43, is also hoping his personal background will attract interest from the national political press should he survive the primary. Born in England to a Pakistani Muslim family, he immigrated to the U.S. as a child. He and his three siblings grew up in the small, rural town of Rosebud, Missouri.

He came to the Bay Area for law school at Stanford and graduated in 2003. After landing a job with Heller Ehrman LLP, a San Francisco-based law firm that later collapsed during the 2008 financial crisis, he moved to Washington, D.C. to work at its office in the nation's capital.

Having earlier met West at a conference where the recently elected mayor talked about his using puppets as a form of political protest, Buttar convinced his law firm to take on West's legal defense. He faced prosecution for officiating same-sex weddings shortly after San Francisco officials began marrying gays and lesbians in February 2004 on the orders of then-mayor Gavin Newsom.

While Buttar is straight, he said he does identify as queer because of his political beliefs and not adhering to traditional ideas of masculinity.

"I am kind of femme," he explained. "I reject traditional gender roles."

A spoken word artist in addition to spinning music, Buttar co-founded the outdoor poetry convergence that for the past 15 years has assembled every Thursday night at the BART station entrance on the corner of 16th and Mission streets in San Francisco.

Currently living in Glen Park, he plans this summer to move into an artist collective in the Haight. He took a leave from his job with Electronic Frontier Foundation to focus on his campaign for office. The first-time candidate vowed that he would run again for Congress in 2020 should he lose this year, as he is not interested in seeking local office.

"I will run for this seat again if I don't win. I don't understand the Board of Supervisors," said Buttar. "I am running for office because I want to ask questions that no one else has the cajones to raise."

Never before interested in being a politician, Buttar told the B.A.R. he was moved to run for Congress this year because of President Donald Trump and his "kleptocratic administration."

"I don't have political aspirations, but I have a great deal of political frustrations," explained Buttar. "It is why I'm running to give San Francisco real representation in Washington."

As for campaigning, Buttar said it has been "a wild and whacky experience" so far.

"I love meeting people," he said, adding that learning of their diverse life experiences "is very humbling."

Running for office, he added, feels "very much like a sail being pushed by the breath of a lot of people. It also feels like a bronco I am just trying to stay on. It is a wild thing, bigger than me and bigger than any of us."