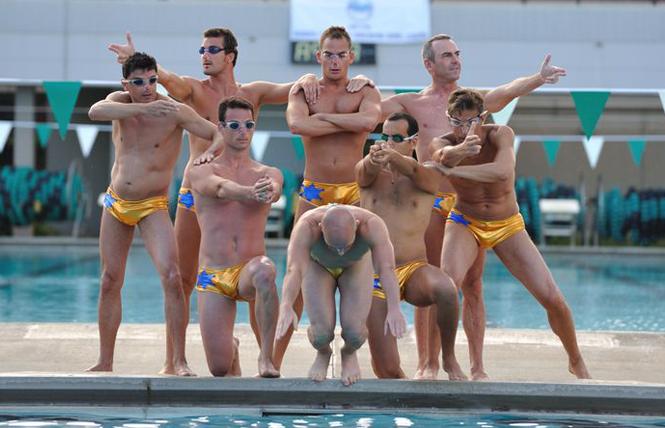 Swimming will be one of many sports offered by Gay Games Paris in August. Photo: Courtesy Paris 2018

With little more than one month left to register for the Gay Games, organizers report they are right at the brink of 9,000 registrants, and the event stands a solid shot at becoming the first Gay Games since 2006 to have 10,000 registrants.

Monday, Paris 2018 reported that it had 8,971 registrants for the LGBT quadrennial sports and culture festival and is expected to pass 9,000 by the end of the week. Registration ends June 30.

Manuel Picaud, co-president for Paris 2018, said his organization had been continually revising its projections to match registrations, expanding tennis and golf when demand exceeded projection and scaling back other sports where registrations lagged.

"We have revised our budget for 10,000 participants," Picaud said.

The marathon, for example, previously was projected to have 750 runners. By Sunday it had 776 registered, so organizers expanded their plans to accommodate 1,000 and could expand beyond that if need be.

Wrestling, on the other hand, was originally projected to accommodate 150 wrestlers but that has been downsized to 100. A total of 85 wrestlers have already reportedly registered.

A full-capacity 32 water polo teams have registered and 11-player soccer is full with 36 teams, although team slots remain open in the 7-player competition.

Two sports that were founded from Day One will not have tournaments, but Picaud said Paris organizers have worked closely with the registered athletes in those sports to make sure they are accommodated.

Roller derby had been budgeted for 300 athletes but has only two signed up so far and is now slated to be an exhibition rather than a competition.

"We still have contact with the official European tournament of roller derby," Picaud said. "The ladies like to register at the last minute, all together. If so, fine. If not, both registered persons are from Paris. We haven't spent money for the event. Same for rugby, but we are going to offer only a workshop to participants and a free other sporting activity."

Rugby, which had been projected at 250 participants but has always had trouble competing with the Bingham Cup for registrations, has just 10 registrants.

Speed skating had been projected to pull in 150 but has just 31 signed up, and organizers now expect to have 50 or less.

Tennis is another sport that was expanded to meet need. Originally planned for 500 participants, the sport currently has 604 players signed up, and the capacity has been revised to 650.

Three days of conferences had been projected to attract 100 people per day, but so far the registrants for those days stand at 26, six, and 39.

For registration and other information on the Gay Games, visit http://www.paris2018.com.

"At this point, our investigation is still formally open," said John Perikles, economic crime division chief with the Miami state attorney's office. "I had been more hopeful more information would have come in by now, but that hasn't happened. I would love witnesses to contact me if they have relevant information."

Perikles said he can be reached by email at johnperikles@miamisao.com.

As reported previously, auditors found that the Miami World Outgames, which was abruptly canceled Memorial Day Weekend in 2017 just before opening ceremonies were to begin, was plagued by sloppy and inaccurate bookkeeping, failed fundraising efforts, and wasteful spending. Assurances were given that registrations were fine when they were lousy, registrants were assured up to the time they got on their planes the event would go on as planned, and organizers never backed down from their claims that the event would have 15,000 participants: far more than any previous LGBT sports festival has ever drawn.

The trouble for law enforcement tasked with making sure the misled registrants get justice is proving criminal intent, that people were defrauded rather than merely falling for the advertising "puffery" of organizers.

Miami Outgames lawsuit update
Attorneys for Keith Hart, treasurer for the 2017 World Outgames in Miami, are rebutting the lawsuit filed against him and other Outgames representatives, challenging its standing as a class action suit and claiming the plaintiffs did little to cut their losses.

Attorneys from Fort Lauderdale law firm Shutts and Bowen filed a response to the lawsuit at the end of last week, asking for the court to rule in Hart's favor. In the response, Hart denies most of the allegations and asserts 11 affirmative defenses. The response says the athletes "failed to mitigate damages," any harm they suffered "was caused in whole or in part by (their) acts or omissions, the lawsuit does not meet the standards to be filed as a class action suit, damages were also caused by the "intervening negligence of third parties," and there were no valid contracts that could be cited for fraud or breach of contract.

Hart's filing also said he has corporate immunity "in that he was merely an employee/officer of Miami Beach-Miami LGBT Sports & Cultural League Inc., and there is no basis to hold him personally liable for any potential debts or claims against the corporate entity."

The other defendants - the Miami Beach-Miami LGBT Sports and Cultural League; Miami Outgames CEO Ivan Cano; and the Gay and Lesbian International Sport Association - have not yet responded to the lawsuit. GLISA sold organizers the licensing fee for the quadrennial LGBT sports, culture, and conference event and owns the brand but has disappeared from the internet since shortly after the cancelled event.

Attorneys in the lawsuit could not be reached immediately for comment.