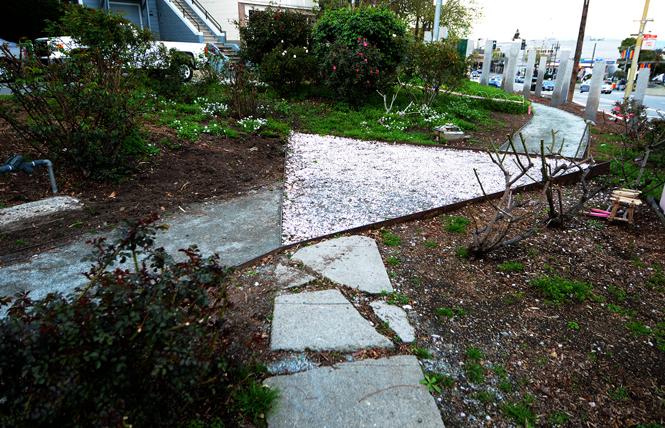 The walkway and rose quartz triangle are shown at the Pink Triangle Park and Memorial Rose Garden. Photo: Rick Gerharter

A San Francisco monument to LGBTs killed by the Nazis in World War II will no longer see an infusion of cash to repair its damaged elements now that two neighborhood groups have relinquished the city grant awarded to the project.

Last spring the city's Community Challenge Grants program had announced it was awarding $100,000 to the Castro/Upper Market Community Benefit District to pay for the renovation and greening of the Pink Triangle Park and Memorial Rose Garden located at 2454-2458 Market Street.

The roughly 3,000 square foot triangular park is situated at the northwest corner of Market and Castro streets (bordered by 17th Street). It features a memorial consisting of 15 pylons created by artists Susan Abbott Martin and Robert Bruce.

The CBD had partnered with the Eureka Valley Foundation, an offshoot of the Castro/Eureka Valley Neighborhood Association responsible for the upkeep of the mini park, to use the grant money to address maintenance issues at the park and build a new ADA-accessible entrance.

But, as the Bay Area Reporter previously reported, the park group informed the CBD last fall that the grant money should be returned to the city. John Goldsmith, the president of the foundation at the time, had insisted that the grant award was never finalized. He refused to sign off on the paperwork and told the B.A.R. he had concerns with which group would have oversight of the grant.

When the CBD submitted the initial grant application last year, it did not include the foundation because its board had yet to form, CBD Executive Director Andrea Aiello had told the B.A.R., and EVNA had signed off on it. Once notified by Goldsmith of the park group's stance, CBD officials notified the grants program of the situation.

Then, in March, Goldsmith was forced to resign as president of the park foundation. The group's board then elected Gary McCoy, a former supervisor aide who now works for the city's Recreation and Park Department, as its president and board chair.

In April, the park board and the CBD were in talks to again use the grant money to repair the park. But after representatives of both groups met with Martin and several residents who helped create the memorial to discuss the scope of the work, the decision was made to return the city funds and start anew.

"While we were completely onboard with the Community Challenge Grant with the Castro CBD, we all realized we had an incredibly tight timeframe and didn't want to sidestep a full community process for a redesign," McCoy told the B.A.R. in a statement. "We'd like to solicit design ideas through a submission process. The agreement to step back from the CCG grant was amicable, and we are excited to be repairing relationships that have drifted over the years."

The foundation, having now split off as its own 501(c)3, is in the process of changing its name to Friends of Pink Triangle Park. McCoy said the move is to clear up confusion on what the foundation's purpose is.

"Our main priorities as an organization right now are beautifying the park, raising funds to continue regular maintenance, cover the costs of planting, pay our water bill, and replenish the rose quartz in the pink triangle," stated McCoy.

Martin maintains legal ownership of the artwork in the park, and her attorney had sent the foundation a cease and desist letter in March due to concerns over proposed changes Goldsmith had suggested be made to the monument. He had told the B.A.R. the changes he discussed came directly from a report the CBD had commissioned in 2016 that determined five of the pylons were unstable and made recommendations for how to address each.

In an emailed reply this week, Martin said she is confident in the park group's current plans for managing the site.

"I am excited that the original impetus of this effort - volunteer participation and community consensus - will propel the next phase," she wrote.

Goldsmith, who no longer has any involvement with the park group, told the B.A.R. he was "glad to hear that" the grant money would be returned to the city.

"It is dead in the water. They have to start all over," he said of the grant process.

As for the CBD, it had inquired with the city grant program if it could use the money to repair an AIDS mural on 16th Street that was damaged by a graffiti artist last year. Known as "The Hope For A World Cure" mural, it was created in 1998 by Elba Rivera and Clif Cox in collaboration with a number of other artists under the purview of Precita Eyes Muralists.

But because it is on private property, the grant money could not be used for such a purpose. The same restriction prevented the CBD from seeking permission to apply the grant money toward repairing the Duboce Bikeway mural behind the Safeway building.

"The funds were awarded in August 2017, they need to be encumbered by the end of the fiscal year. It is now May, and too late for that to happen," Aiello explained to the B.A.R.

The park group is having a community workday from 9 a.m. to 1 p.m. this Saturday, May 19, to weed the site and lay mulch.