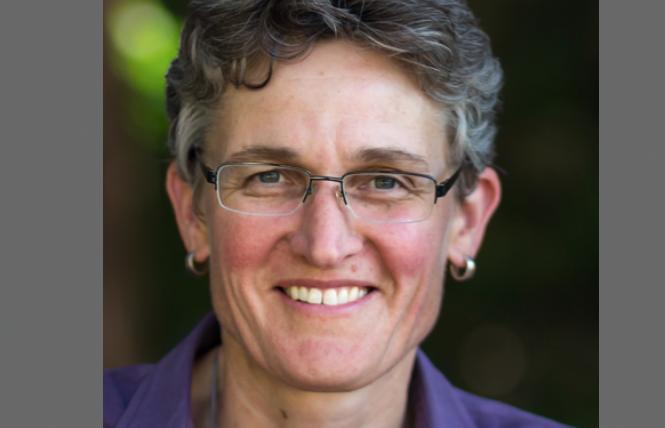 A lesbian former Bay Area councilwoman will take on a longtime Republican incumbent in a rural Oregon congressional district this November having won her Democratic primary race Tuesday.

Jamie McLeod-Skinner, 50, the first lesbian elected to the Santa Clara City Council, on which she served eight years beginning in December 2004, is seeking the Beaver State's expansive 2nd Congressional District seat. Covering Oregon's eastern inland areas, the district hugs the border with California and includes the theater town of Ashland, the city of Bend, and La Grande outside of the Umatilla National Forest.

Congressman Greg Walden (R-Hood River), 61, has held the seat since 1999 and is seeking a 10th two-year term this fall. Seven Democratic candidates had pulled papers to compete in the May 15 primary to be their party's candidate in the general election.

He is expected to win come November, as the 39,932 votes cast for all of the Democratic primary candidates fell well short of the 61,180 votes cast by Republicans.

Nonetheless, McLeod-Skinner is pitching herself as a "rural Democrat" in touch with the district's needs. She has garnered local media attention for traveling around the district with her 2-year-old Doberman, Moshi, riding along in her blue Jeep Wrangler.

"Thank you to everyone who helped us win tonight," McLeod-Skinner wrote on Twitter late Tuesday. "Honored to be your rural Democratic nominee for Congress. We have a lot of work to do but, together, we can beat Greg Walden."

McLeod-Skinner moved to southern Oregon as a child. Her wife, Cass Skinner, comes from a multi-generational ranching family in eastern Oregon's Jordan Valley. The couple married last May and are raising Skinner's four children ranging in age from 12 to 21. They split their time between Redmond and Ashland.

In 2013 McLeod-Skinner enrolled in law school at the University of Oregon, graduating in 2016. She had been hired as the city manager of Phoenix, Oregon but was fired last year after a local election brought new leadership to the town's City Council.

Also winning her primary Tuesday was bisexual Oregon Governor Kate Brown, 57, who has led the state since 2015. The only LGBT governor in the country, she will face-off against Republican state Representative Knute Buehler, 54, of Bend in November.