Resist: Queers never die - Degenderettes and the art of resistance 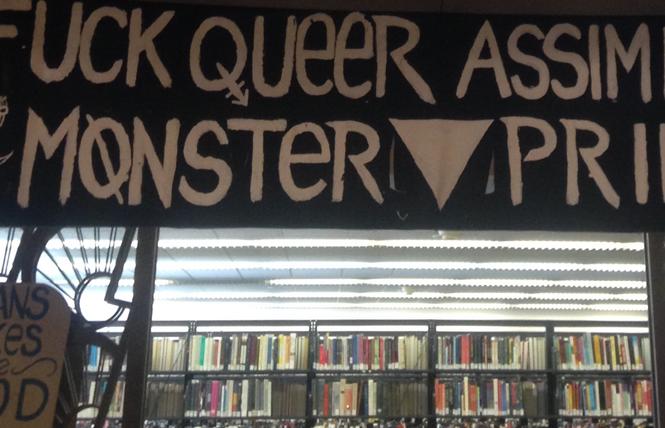 A Pride banner and two "Trans Dykes Are Good and Pure" shields are part of the "Degenderettes Antifa Art" exhibition at the San Francisco Public Library's main branch. Photo: Christina A. DiEdoardo

Over the last four years, members of the northern California chapter of the Degenderettes have held space for trans and queer people at countless demonstrations, helped defend Sproul Plaza at UC Berkeley from Milo Yiannopoulos and his fascist fellow-travelers, set up a room where people can break objects for cathartic purposes, and made some of the most dramatic protest art seen in the Bay Area in decades, from fully-articulated (and massive) puppets to clothing that drives bigots to distraction.

What motivates all this, as a panel of several Degenderettes told a crowd of nearly 200 people at the main branch of the San Francisco Public Library Saturday, May 12, is a simple desire.

"We're here to survive," said Mya Byrne. "We make ourselves visible and present in a great deal of public spaces because it's needed."

Saturday's forum at the library was to talk not only about the group, but its work, samples of which went on display in the "Degenderettes Antifa Art" exhibition at the James C. Hormel LGBTQIA Center on the third floor of the main library, in March.

The exhibition has been controversial in some quarters. In late April, a group of Trans Exclusionary Radical Feminists, or TERFs, demanded the library cancel the exhibition entirely or, at a minimum, remove certain items it claimed promoted violence against women.

From my perspective, the gall required on the TERFs' part to make such a claim is simply staggering. For those who aren't aware, TERFs are bigots who claim trans women are men, trans men are women, and nonbinary genders are a fantasy.

As a direct and proximate consequence of this belief, many TERFs actively engage in or support measures to physically threaten or harm trans women in particular, ranging from doxing (disseminating our private information with the intent to cause harm) to harassing our employers and families to - on occasion - explicitly threatening us with violence or death, either directly or by attacking trans women in crisis with the intent of encouraging them to self-harm.

On a tactical and strategic policy level, many TERFs - most of whom are cisgender women, both straight and queer - happily collaborate with homophobic organizations like the Pacific Justice Institute, which has been designated a hate group by the Southern Poverty Law Center, on PJI's anti-trans measures, apparently because their shared transphobia overcomes all other considerations from the TERFs' perspective.

To the library's shame, it capitulated to demands from the TERFs by removing one item from the exhibit, which otherwise remains intact, purportedly because the object "could be interpreted as promoting violence," according to a tweet posted on the library's official Twitter account.

"I am the person who made the piece that was removed," said Degenderette Yolkai LeFierce. "It was a T-shirt that said, 'I punch TERFs.'"

LeFierce said they made the shirt to wear at the Dyke March, where they received nothing but positive feedback.

"I'm not a violent person," they said. "But if TERFs come for my friends, they have to come through me first."

LeFierce noted that the context card, which had been attached to the exhibit, explained this.

For LeFierce, who said they were assigned female at birth, the biggest takeaway for them was the contrast between what happened when a trans woman comrade wore the shirt compared to what occurred when they did so. TERFs, who had completely ignored the shirt when LeFierce wore it, rose in outrage when a trans woman did.

In addition, while TERFs have blasted that trans woman's identity far and wide, LeFierce says their name has never been connected with the shirt - even when they've posted on TERF sites that it's their creation, LeFierce's name is always mysteriously excised.

For me, the other issue, as far as the library or other curated spaces go, is that it's unrealistic at best, and silencing at worst, to expect revolutionary art created by members of marginalized communities, such as that made by the Degenderettes, to consist exclusively of hugs and flowers.

If art is a mirror of a society and its times, it would be shocking if the art of trans and queer people who are literally under attack didn't look like what the Degenderettes have created. Removing a piece because a bigot thinks it might be "interpreted" as encouraging hostility toward bigots, as the library did here, is roughly like sending Pablo Picasso's "Guernica" to storage because the Luftwaffe's feelings are hurt.

Moreover, the art featured in the exhibit often has a practical purpose. I can still remember seeing the Degenderettes and their "Trans Dykes are Good and Pure" shields in action in February 2017 during the First Battle of Berkeley, when they, myself, and over 1,000 others occupied Sproul Plaza and sent Yiannopoulos running for the hills. That night, those shields weren't just an artistic statement - they protected a lot of people, so it was nice to see a few of those types of shields in the library exhibit.

That said, even if trans women had the luxury of leaving the TERFs and non-governmental fascists like Yiannopoulos to one side for a moment (which we lack), we'd still be faced with the reality of having to confront the most openly transphobic regime in American history just to stay alive.

Despite all this, Byrne and their comrades with the Degenderettes are undeterred.

"We will not be silent," they said. "And we're pretty damn loud, especially if you give us a bullhorn, which people do for some reason.

"Maybe, because we're cute," they added with a laugh.

The exhibit runs through Thursday, July 19.