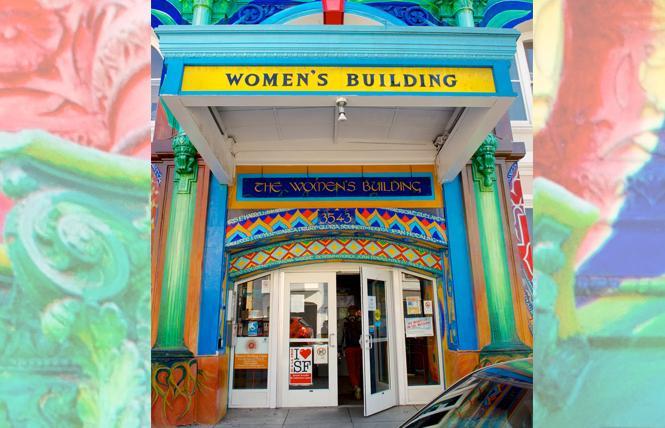 The San Francisco Women's Building has been officially recognized as a national historic site. The designation makes it one of nearly two-dozen properties across the country given such federal recognition due to its place in LGBT history and only the third on the West Coast.

The National Park Service approved the listing on April 30 and only recently publicly disclosed its decision.

As the Bay Area Reporter has previously reported, the Women's Building was founded in 1971 by a group of women that included a number of lesbian leaders, such as Roma Guy, whose life and advocacy for the building was depicted last year in the ABC miniseries "When We Rise" about a number of LGBT San Francisco leaders.

In 1979 the Women's Building moved into its current location, at 3543 18th Street near Valencia Street, where it has hosted numerous meetings of LGBT groups and conferences over the years and continues to do so. The building is already deemed a city landmark, though it was listed for its historical significance predating the modern LGBT rights movement.

"It has been such a labor of love, it really does feel like a victory," said Donna Graves, a public historian based in Berkeley who spent two years working on the Women's Building application.

Teresa Mejía, executive director of the facility in the city's Mission district, did not immediately respond to a request for comment Thursday afternoon.

Graves told the B.A.R. in a brief phone interview that having the Women's Building listed at the national level of significance is remarkable for the fact it recognizes not only the facility's importance to the local LGBT community but also to the Bay Area's radical feminist movement.

"The fact this was recognized for its importance to American history at the national scale level is unusual because radical women's history from that period hasn't received very much acknowledgement at all," noted Graves. "This kind of intersectional history recognizing LGBTs, women, and marginalized racial and ethnic groups all together is unusual for the national register."

She is now working with the Women's Building staff on securing a plaque to publicly declare the structure as a national historic site. It is unclear, however, when the signage would be unveiled.

The Women's Building had initially sought to become a National Historic Landmark, a designation with higher stature than that of a national historic site. But after the election of President Donald Trump, and on the advice of federal park advocates, the decision was made to seek placement on the National Register of Historic Places.

The first West Coast LGBT historic site to be listed on the national register, the Federal Building (50 UN Plaza) in San Francisco, happened last June. The site is where the decade-long AIDS/ARC Vigil was held to protect the lack of a federal response to the deadly disease. It began in 1985 when several gay men chained themselves to the building's doors.

Last September saw the addition to the national register of the Great Wall of Los Angeles, a half-mile long mural that depicts numerous California historical events and figures, including the struggle for LGBT rights.

In February of last year the Mitchell Camera Building/Studio One/The Factory in West Hollywood was deemed eligible for listing on the National Register of Historic Places. But it was not officially listed due to the objections of the property owner, who has plans to redevelop the former gay disco site into a mixed-use hotel and retail complex.

The Park Service's webpage for its LGBT cultural heritage initiative currently lists 22 LGBT historic places, some landmarks and others historic sites like the Women's Building. To see the various properties, visit https://www.nps.gov/subjects/tellingallamericansstories/lgbtqplaces.htm.