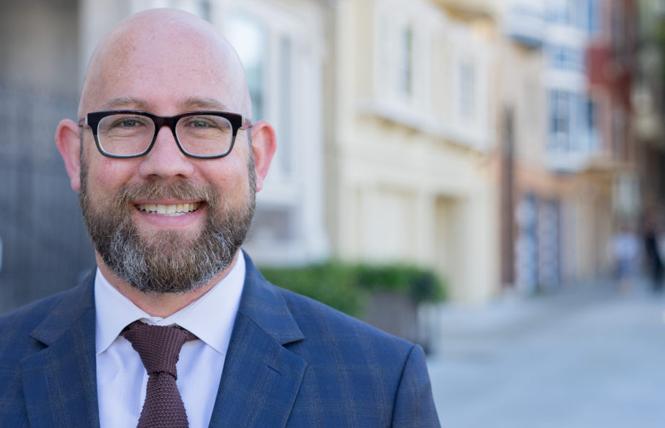 Usually we are inclined to support incumbents, however, this time, we think challenger Rafael Mandelman is the better choice for District 8 supervisor.

Over the course of the last year, Mandelman has shown that he has the enthusiasm and knowledge to represent the Castro, Noe Valley, Glen Park, and surrounding neighborhoods.

When residents could not get a response from the supervisor's office, they resorted to contacting Mandelman, who addressed their concerns when he was able. One of those was a high-profile meeting in late January with a property management company when residents expressed concern about the empty storefronts along the Church Street corridor in the Castro. Mandelman did the job of a supervisor by bringing together local merchants, the property management company, and the neighbors.

To Mandelman, being a supervisor is not just showing up in the board chambers on Tuesdays and voting. "I think the job is all the work you can do in the community and be available to constituents," he told us in our editorial board meeting. "Secondly, the supervisor has the ability to advance solutions. I want a mayor who will do a good job and I want a District 8 supervisor to provide leadership. We're failing on homelessness, housing, and transit."

Both Mandelman and current District 8 Supervisor Jeff Sheehy are gay men. Sheehy is also the first known person living with HIV to serve on the board. He has made fully funding the city's Getting to Zero initiative a top priority. Mandelman said that HIV/AIDS issues, including funding, and cannabis are also top priorities for him.

Even though Mandelman is generally pegged as the progressive and Sheehy the moderate in the race, judging from their stances on the issues, the labels are irrelevant. Both have similar priorities addressing homelessness, HIV, affordable housing, clean streets, and vacant storefronts. Mandelman told us his politics are liberal, and that serving on the City College board has taught him the value of pragmatic governance.

Sheehy was an inspired choice when the late mayor Ed Lee appointed him in January 2017 to finish the term of now-state Senator Scott Wiener (D-San Francisco). But in this, his first campaign for the seat, Sheehy has mostly acted like he's indifferent to winning, and his lackluster campaign strategy reinforces that perception. In his editorial board meeting, he kept telling us that he's an activist, not a politician. But serving on the Board of Supervisors is political, and Sheehy has struggled with that aspect of the job, and attempting to stake out a position as an independent on the board has not helped him. We're also dismayed that he was the crucial sixth vote to remove acting mayor London Breed and that he did not vote against the replacement for lesbian Leslie Katz on the Port Commission, despite saying at the committee hearing that LGBT representation on city commissions is important. "For us, as a community, there is always this assumption we've made it," he said at the hearing. "Anyone who knows the history of the LGBT community knows that whenever we make gains we lose those gains."

In contrast, Mandelman has been everywhere in District 8, campaigning hard, knocking on doors, and meeting with potential voters. He wants the job. As supervisor, constituents can expect to hear back from his office when contacted, and we are confident that he will continue to be accessible. Mandelman has gained experience in his years serving on the City College board, on which he worked very hard to save the community college even when the board's power was taken away and the school's accreditation was in question. Thanks to wide community and political support and favorable court rulings, City College's accreditation remains in place and increasing enrollment is returning to levels it was before the crisis hit.

"I feel really, really ready to step into this role," Mandelman told us.

We think so too.