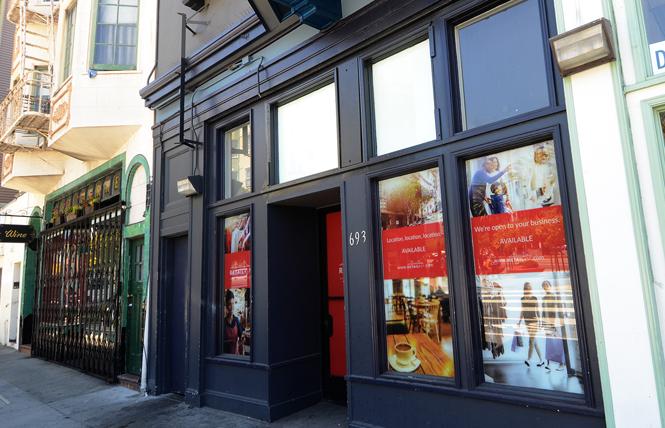 An improvement association for the gay Castro district is looking to move its offices into a vacant storefront, giving it a prominent location for the first time.

The Castro/Upper Market Community Benefit District is seeking city approval to move into 693 14th Street. Snowbright Launderette, the former longtime occupant of the retail space just off Market Street, closed at the end of January.

"I am so excited about it. By being in a storefront, we can have a sign and people could see where we are," said CBD Executive Director Andrea Aiello. "We will become so much more visible to the community and accessible, which would be so, so good."

In order to move its offices and staff into the vacant storefront, the CBD is seeking a change of use for the space from city planning officials. Because it is classified as a public facility under the zoning code, the CBD is allowed to seek approval to locate in the ground floor retail space.

It does not yet have a hearing date before the planning commission. Should it be approved, the CBD plans to hold its various board and committee meetings, which are open to the public, at the location as it will be ADA accessible.

"I would be excited to get in by August," said Aiello when asked how soon the CBD could relocate its office.

To help activate the storefront, Aiello told the Bay Area Reporter the she is looking at having set hours where the office would be open to the general public so that "people can come in and get information about the neighborhood and about the CBD."

Progress on vacant storefronts
That section of the neighborhood, centered on the intersection of Church and Market streets, has seen a host of longtime businesses shutter over the last year as well as new ones open. One of the most visible corner spaces, 2101 Market Street, finally saw Santa Cruz-based Verve Coffee Roasters open its first location in the city in early 2017.

Across the street at 2099 Market Street, which in the 1990s housed the headquarters for savings and loan association Continental Savings of America, Compass Real Estate has moved into the prominent storefront. Nearby, at 235 Church Street, Il Casaro Pizzeria is planning to open where the former eatery Chilango had been.

Boombox Fitness, a private training studio, has taken over 2109 Market Street, which had housed the shoe retailer Good Feet. An art pop-up is going in temporarily to 212 Church Street, where Church Street Flowers had been.

All of the retail spaces, including the one the CBD has a lease for, are controlled by the property management firm Veritas Investments Inc. It has been working to seismically upgrade some of its properties at that intersection, leading to several of the vacant storefronts, while a few of its commercial tenants have closed their doors, such as Sparky's Diner at 248 Church Street and Crepevine at 210 Church Street.

At a recent meeting of the Castro Merchants business association, Veritas asset manager Justine Shoemaker said the company was close to inking deals with two tenants for the former diner space, which needed a lot of work to bring it up to code. In today's challenging retail environment, Shoemaker said it is not easy to lease out the empty storefronts.

"Re-tenanting spaces takes a long time," she said, noting that in the past "it used to take three to four months to get a tenant and now it can take a year or longer."

Contrary to rumors that Veritas has sought substantial rent increases from its commercial tenants, Shoemaker said the company tries to work with them to find a rate that is acceptable for both parties. It is currently seeking between $4 and $6 a square foot for its upper Market Street storefronts, she said.

"I don't want those tenants to go away. We work with them on their rents," said Shoemaker. "We have never kicked out a tenant, that is not what Veritas does."