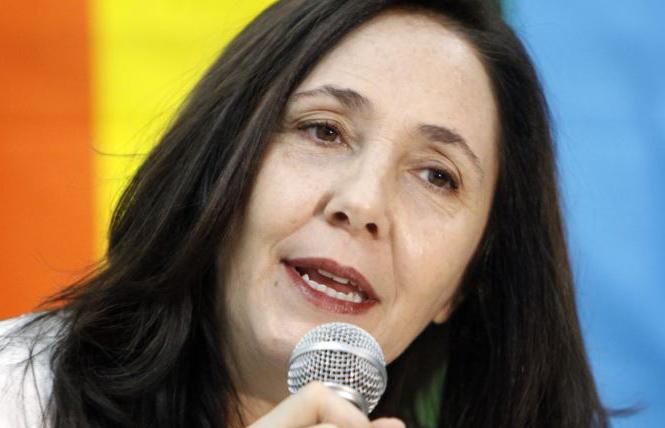 Cuban LGBT rights advocate Mariela Castro announced May 4 that she will push for same-sex marriage and other sexual orientation and gender identity rights during a forthcoming revision of the country's constitution.

Currently, Cuba's constitution defines marriage as between a man and a woman.

It's anticipated that the National Assembly will begin the constitutional reform process in July.

The reform of the Communist country's constitution is expected to modernize it.

The announcement is part of Castro's ongoing push for marriage equality in Cuba. A straight ally, Castro wasn't forthcoming about the details of her proposed recommendations in the new constitution, reported Telesur. However, she plans to present her proposal to the assembly as a part of the constitutional modernization process, she told reporters during an early morning news conference in Havana.

"The main idea is not to delay them in new law and incorporate them in those that already exist so that it is more expeditious," Castro, who is the daughter of former Cuban President Raul Castro and a member of the National Assembly of People's Power, told reporters.

It's an opportunity to present sweeping reforms during the constitutional change rather than changing one law at a time, she said.

Same-sex marriage is legal in some other Latin American countries, such as Argentina, Colombia, Costa Rica, Uruguay, and Mexico City and some states in Mexico.

Cuba doesn't have to comply because the country isn't a signatory of the American Convention on Human Rights, reported the Washington Blade.

Castro is also the director of Cuba's National Center for Sexual Education. As head of the Caribbean country's sex education center she's been a longtime advocate for LGBT rights and heads Cuba's annual Day Against Homophobia and Transphobia marches as well as pushes for pro-LGBT legislation in the National Assembly.

She made the same-sex marriage announcement ahead of Havana and Pinar del Rio's week of events leading up to the International Day Against Homophobia and Transphobia marches May 17.

The announcement comes less than a month after her father, Raul Castro, who is the brother of the late President Fidel Castro, stepped down and the National Assembly chose Miguel Diaz-Canel to succeed him as Cuba's president.

Castro hopes to work with Diaz-Canel on improving LGBT rights in Cuba, she told reporters.

Diaz-Canel recently defended Castro's doctorial thesis focused on the "social integration" of transgender people. He has also supported El Mejunje, an LGBT cultural center, when he was secretary of the Communist Party in the Villa Clara Province, reported the Blade.

LGBT rights in Cuba
Cuba repealed its anti-sodomy law in 1979. The country's LGBT population endured harsh persecution during and after the Cuban revolution, 1953-1959, which brought Fidel Castro to power.

During the revolution, an estimated 25,000 gay men were sent to labor camps, deemed unfit for military service, and that was just the beginning, according to LGBT activists and scholars.

"The Cuban government began a series of initiatives to repress the gay and lesbian community," Michelle Chase, a professor of Latin American history at Pace University and author of "Revolution Within the Revolution," a book outlining the role of gender politics in Cuba in the 1950s and early 1960s, told NBC News.

She added that the government "closed down a lot of urban nightlife and bars, barred gays and lesbians from certain professions, such as education, briefly detained gay men in street roundups, and - most notoriously - imprisoned some gay men in forced labor camps."
Fidel Castro apologized for forcing the gay men into the work camps in 2010.

When the HIV/AIDS crisis hit Cuba, the government quarantined people who contracted the disease in state-run sanitaria until 1993.

In recent years, Cuba has done an about-face legally, but not necessarily socially, and much of it appears to be due to Castro's advocacy.

For the past decade, transgender Cubans have been able obtain free sex reassignment surgery through Cuba's government-sponsored health care system. However, fewer than 40 people have been able to successfully receive the benefit, Castro noted, reported the Blade.

Discrimination in the workplace has been illegal since 2013, although it only covers sexual orientation, not gender identity, which is why Castro voted against the law.

In October 2017, a three-judge panel in Havana made a groundbreaking ruling granting custody of a woman's late partner's children to her. It was perhaps the first time Cuban officials have ever legally recognized the "legitimacy of a non-heteronormative family," Acepto, a group that advocates for marriage rights for same-sex couples in Cuba, told the Blade.

Castro's also been a vocal anti-bullying campaigner for children in schools.

Her LGBT advocacy was captured in an HBO documentary, "Mariela Castro's March: Cuba's LGBT Revolution," in 2016.

A new queer Cuba
Not all LGBT advocates agree with Castro putting same-sex marriage and LGBT rights at the top of her list.

Heriberto Sosa, president of Miami-based Unity Coalition/Coalicion Unida, a Latino LGBTQ advocacy organization, told NBC that he would prefer she would put human rights at the forefront of her agenda.

"As important as gay marriage would be for LGBTQ people on the island, human rights comes first," he said. "If she really wants to help Cuba, she should fight for freedom of speech, freedom to vote, and the welfare of all Cubans."

"Compared to a country like Jamaica, where hostility or even physical violence toward gay men is common, it's rare to find open expressions of hostility toward gays and lesbians in Havana," she said.

She added that Castro's move suggests that she sees opportunity in a time of transition and pushing CENESEX's agenda will hopefully lead to "secur[ing] Diaz-Canel's backing," she said.

"Had I grown up in Cuba as a gay woman, I know my life would have been a lot harder due to Cuba's long history of violence against my community," Hernandez, who fled Cuba with her family nearly four decades ago and now lives in Houston, told NBC. "Cubans are ready for change ... every Cuban has the right to marry whomever they love, irrespective of gender."

Sanchez, 40, a journalist and a member of the Partido Accion Cuidadana (Citizen's Action Party), now represents a portion of San José Province in the National Assembly.

He supports same-sex marriage as did former president Luis Guillermo Solis, but Solis was unsuccessful pushing same-sex legislation through the country's National Assembly during his presidency.

Sanchez, whose focus is on improving Costa Rica's access to technology and reforming the country's public television network, told the Washington Blade May 3 that he never hid his sexual orientation during his campaign and received a "positive" reaction from voters.

"My campaign sought to promote visibility for the LGBT community," he said. "My sexual orientation wasn't something I hid."

The inquiry follows the court hearing petitions from LGBT rights supporters demanding to abolish Section 377, the British colonial-era law banning "carnal intercourse against the order of nature with any man, woman or animal."

The law has been interpreted and used by authorities to make arrests, although it hasn't been enforced in recent years, petitioners told the court, but blackmail and intimidation have occurred, and the public discriminates against and attacks queer people, causing them to live in constant fear.

When the law is enforced, individuals convicted face up to 10 years in jail.

In addition to the petitions, the court is considering the case of Arif Jafar, who was arrested under Section 377 in 2001 and held for 49 days. His case is still pending, reported the Thomson Reuters Foundation.

LGBT advocacy groups have pushed for years for the abolishment of Section 377, which was struck from the books in 2009, until the Supreme Court reinstituted the law in 2013 and said lawmakers needed to resolve the issue.

In January, the court announced it would reconsider its 2013 decision.

The court's notice to the government "is a watershed in the whole fight against Section 377," petitioner Ashok Row Kavi, chairperson of Humsafar Trust, a charity that works with India's LGBT community, told Reuters.

"The government will have to decide whether this colonial law should still stand relevant in a country that has its own constitution that protects fundamental rights of its citizens," he said.
It's unclear how many LGBT Indians live in the subcontinent. Using figures from people who have reported their sexuality to the health ministry, government officials estimate there are 2.5 million gay people in India, reported Reuters.

That number could be higher due to people living in the closet in fear of discrimination, campaigners said.