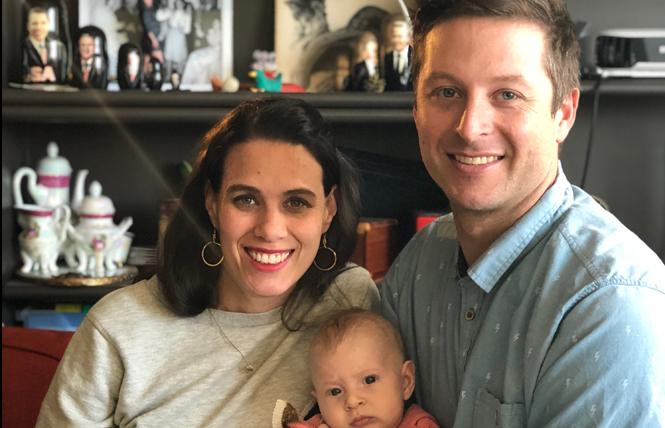 Members of San Francisco's sex-positive community, from leathermen and women to those in polyamorous relationships, are courting political power at City Hall. They are looking to form a new political group and to push their own agenda on a host of issues.

Roughly 30 people attended a May 2 meeting to formalize a list of action items and gauge interest in creating the new club later this summer, tentatively titled the San Francisco Sex-positive Democratic Club.

Some of the issues that emerged at last week's gathering included advocating for venues in San Francisco that could host sex-positive events and helping to see the recently approved leather LGBT cultural district in the city's South of Market neighborhood become a reality.

Housing was also a top concern, with sex-positive community members noting there is a lack of housing that can accommodate polyamorous families that require three bedrooms or more. A key goal would be seeing more housing built in SOMA, particularly in or near the leather district, so that people are closer to the venues that cater to the sex-positive community.

With housing a long-term goal, the advocates want to see public transit agencies provide better overnight service for those who go out or work at sex-positive nightlife venues.

Another expressed goal is replicating in San Francisco the decision in mid-December by Berkeley city officials to enact a ban on discrimination based on a person's relationship structure in housing and employment. It is similar to the LGBT community's fight to include sexual orientation and gender identity among the list of protected classes covered by local, state and federal non-discrimination laws.

"It is really exciting because what they did in Berkeley adding relationship structure to the list of protected classes is something achievable and replicable in San Francisco," said pro-housing development advocate Sonja Trauss, who is running this fall for the open District 6 supervisor seat, which includes SOMA and the Tenderloin neighborhood.

While Trauss doesn't use the term polyamorous to refer to herself, she is in a non-monogamous marriage. She co-hosted last week's meeting with several sex-positive community leaders.

"One of the things that came up over and over was this sense of wanting people to know that this lifestyle exists," said Trauss. "People talked about being shy, individually, about revealing oneself but also having a desire for legitimization, so that is something."

Race Bannon, a gay man who is the Bay Area Reporter's leather columnist, was unable to attend the meeting but supports the goals expressed by those in attendance.

"With San Francisco typically being on the leading edge of informed and reasoned acceptance of the full range of sexuality expression, the more the city can do to provide a sex-positive and accommodating atmosphere the happier I and many would be," Bannon told the B.A.R. "The new Leather and LGBTQ Cultural District is a welcome acknowledgement of an often ignored set of leather communities, but we definitely need more venues at which can be held sex-positive events citywide."

He pointed out that both the city's heated real estate market and state liquor license laws make it difficult for members of the sex-positive community to open clubs or to host events.

"The real estate market is generally shrinking available event venue space and sex-related events are even more marginalized," he said. "Sometimes our arcane state liquor laws are to blame, but the city could put the weight of its official capacity to increase the possibility of more available spaces."

Mark Press, a campaign consultant helping to form the new political club, told the B.A.R. in an emailed reply that the time was right for the sex-positive community to organize itself.

"I am thrilled that the community is embracing local political engagement in order to advance our interests," wrote Press, who is polyamorous, hetero-flexible, and has been involved in the BDSM/poly/queer communities for 10 years, including hosting and managing public and private parties. "I have been deeply passionate for many years about both politics and sex-positive-feminism, but felt that the political moment wasn't right to combine those passions."

The club will be able to advocate for those within the sex-positive community who are fearful to come out of the closet, noted Press.

"Although there have been many fantastic advocates for cultural change, we need to organize around the kinds of legal changes that support our community, and those who fear involvement either due to a lack of access to political power structures, or a fear of risking their access by attaching themselves to topics that some see as controversial," wrote Press.

The policy proposed in Berkeley, which has not been previously reported on, would prohibit discrimination in employment, housing, business practices, city facilities and services, or education on the basis of relationship structure. While it would apply to the city and private entities, it would not cover religious institutions.

The city manager and city attorney are working to refine the language of the new policy before sending it back to the City Council for final approval. City Councilwoman Linda Maio, who sponsored the proposal, told the B.A.R. this week that the vote would likely be this fall.

According to a memo from Maio's council office, the city would afford all protections currently provided against discrimination on the basis of sexual orientation to polyamorous people. Those who face discrimination for being in a non-monogamous relationship, or for wanting to be in one, could sue for damages under the city policy.

One of the issues that came up since the council instructed city officials to refine the policy, said Maio, is if employers would be required to extend medical benefits to the partners of polyamorous people. It is not what she had in mind in proposing the policy, explained Maio, so the city is looking at how to limit its scope.

"The concern was you could state you have 10 polyamorous relationships and each of the people would be entitled to health care benefits and retirement benefits. You can't do that; you have to be realistic here," said Maio.

She was inspired to bring forth the policy proposal by a polyamorous couple she is friends with that had voiced concerns about those in the sex-positive community losing their jobs or homes if their landlord or employer objected to their being in non-monogamous partnerships.

"I think there is a lot more of this going on than we probably see or realize," said Maio.

The gubernatorial hopeful took her oath as a candidate late in the afternoon Friday, May 4, at the San Francisco elections office. Fimbres, 65, lives in the city's Sunnyside neighborhood and is a Navy veteran.

As the B.A.R. previously reported, she had sought to make the June 5 primary ballot as a Green Party candidate but failed to raise the $3,916.12 filing fee. After a fellow Green Party candidate sent her the information for how to wage a write-in campaign, Fimbres decided to take the long-shot strategy.

Based on polling in the race, Lieutenant Governor Gavin Newsom (D), the former mayor of San Francisco, is expected to be the top vote-getter in the primary and may face a Republican in the November general election, either attorney John Cox or Assemblyman Travis Allen. Former Los Angeles mayor Antonio Villaraigosa (D), however, could end up trouncing the GOPers and compete against Newsom in the fall election.