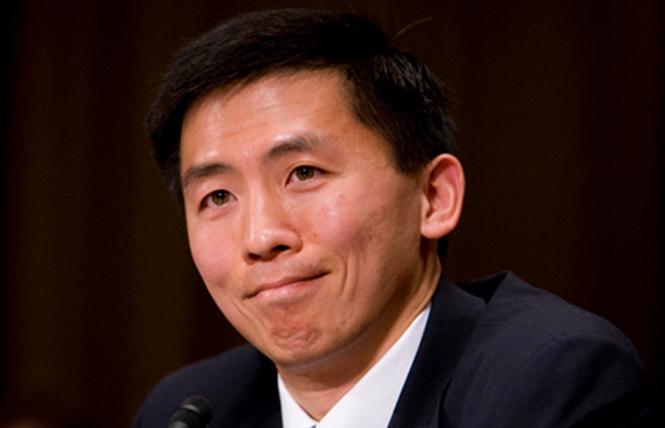 The 10th anniversary of the California Supreme Court's historic same-sex marriage ruling is next week, and a panel of legal experts will discuss its impact during a luncheon program in San Francisco.

California Supreme Court Justice Goodwin Liu, who was not a member of the court when it made its 2008 decision that briefly legalized same-sex marriage in the Golden State, will be a special guest. He will join Shannon Minter, legal director at the National Center for Lesbian Rights; David Codell, former NCLR constitutional litigation director; and UC Davis law professor Courtney Joslin Tuesday, May 15, from noon to 1:30 p.m. at Morrison and Foerster LLP, 425 Market Street.

The court case, In re Marriage Cases (43 Cal. 4th 757 2008), recognized the freedom to marry for same-sex couples and strict judicial scrutiny for laws that discriminate based on sexual orientation. The panel will discuss the far-reaching impacts of the decision.

Same-sex couples began marrying in California in June 2008, and the weddings continued until they were halted after voters passed Proposition 8, the state's same-sex marriage ban, in early November.

The luncheon program is free for anyone who's not an attorney, organizers said. Lawyers pay $35, which includes one hour of MCLE credit. To register, visit http://support.nclrights.org/site/Calendar?id=101322&view=Detail.

The center will offer accessible voting equipment. People can also stop by to register to vote or update their registration, drop off vote-by-mail ballots, or exchange a spoiled ballot.
In related news, the elections department announced that it started to send out vote-by-mail ballots this week.

For more information about the June 5 primary election, contact the department at (415) 554-4375 or sfvote@sfgov.org.

The group plans to meet the second and fourth Thursdays of the month. Organizers said that all are welcome.

STD rates increasing
San Francisco health officials said last week that the city is experiencing a significant increase in sexually transmitted disease rates, including syphilis, chlamydia, and gonorrhea. The highest rates of STDs are among men who have sex with men, adolescents and young adults, and transgender persons.

"With the rising rates, we are diagnosing more severe complications of STDs, particularly congenital syphilis and neurosyphilis," said Drs. Tomas Aragon and Susan Philip of the Department of Public Health.

Aragon, health officer for the city, and Philip, director of disease prevention and control, urge providers to integrate sexual health and STD prevention into routine primary and HIV care.

Additionally, the "Treat Me Right" message from the Centers for Disease Control and Prevention (https://www.cdc.gov/std/sam/2018-providers.htm), has information for providers and patients.

DPH urges men who have sex with men and trans patients be screened for rectal and pharyngeal gonorrhea and chlamydia, syphilis, and HIV every three months.

Sexually active women under 26 should be screened annually for gonorrhea and chlamydia.

Those with a history of an STD in the last year, methamphetamine use, sex work, incarceration, intimate partner violence, and women whose male partners have sex with men should consider additional screening, officials said.

Nonprofit tax seminar
The California Department of Tax and Fee Administration will hold a free seminar for nonprofit and exempt organizations Tuesday, May 15, from 8:30 a.m. to 12:30 p.m. at the Elihu Harris State Building, 1515 Clay Street, in Oakland.

Organizers said that local nonprofit leaders and tax practitioners are welcome to attend and learn how state laws apply to the operation of their organizations.

Final Milk plaza meeting
The fourth and final meeting in a series on the redesign of Harvey Milk Plaza will be held Tuesday, May 15, from 6 to 8 p.m., at Sanchez Elementary School 325 Sanchez Street.

At the meeting, the new design proposal for the plaza will be unveiled.

Queer youth in France, US
The French Consulate in San Francisco will join with the Lavender Youth Recreation and Information Center and the GLBT Historical Society for a program titled, "LGBTQ Youth in France and the U.S.: Looking Back, Looking Forward" Thursday, May 17, from 7 to 9 p.m. at the GLBT History Museum, 4127 18th Street.

Panelists will offer perspectives on how the lives of LGBTQ teens and young adults in France and the U.S. were shaped in the past and how LGBTQ communities and their allies are working to support queer youth today.

Speakers will include Michael Lucey, French professor at UC Berkeley; Don Romesburg, professor of women's and gender studies at Sonoma State University; and Nicolas Noguier and Clare Hart from Le Refuge, a French organization that provides support to queer youth rejected by their families.

People can learn how to get involved in volunteer activities, athletics, health, lifestyle, and arts and culture. They can meet new friends or bring their friends to this free event.

SFGH foundation partners in NIH research project
The San Francisco General Hospital Foundation is partnering with the National Institutes of Health and other organizations to participate in the All of Us research program, an effort to advance individualized prevention, treatment, and care for people of all backgrounds.

People ages 18 and older, regardless of health status, are able to enroll. The official launch date will be marked by community events across the country as well as an online event. National enrollment began May 6.

"We are proud to serve as a partner in this national effort to ensure all communities are included in the All of Us research program," Amanda Heier, CEO of the SFGH Foundation, said in a news release.

The foundation, in partnership with the Center for Vulnerable Populations at Zuckerberg San Francisco General Hospital, is providing support by raising public awareness about the program among the LGBTQ community.

To learn more about the program and how to join, visit https://www.joinallofus.org/lgbt.