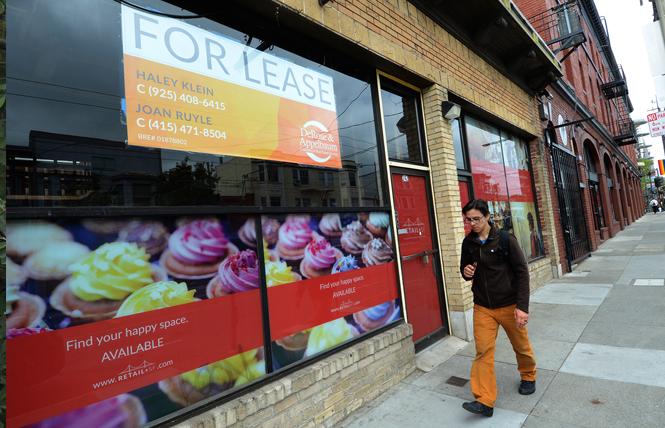 The site of the former Sparky's Restaurant is now vacant. It is one of several empty storefronts in the 200 block of Church Street. Photo: Rick Gerharter

Dealing with the growing glut of empty storefronts in commercial corridors throughout the city is among the to-do list items for San Francisco's next mayor. The issue has been a pressing one for years in the city's gay Castro district, where locally-owned businesses have struggled amid increasing rents, changing demographics, and the rise of online retailing.

Also transforming the neighborhood's retail landscape has been the addition in recent years of ground-floor storefronts in new mixed-used residential developments along upper Market Street. Many of the sidewalk retail spaces have sat vacant as landlords have struggled to attract tenants, and more are on the way as several new developments are either under construction or have been approved by city planners.

Efforts to fill them can be hampered by a range of issues, from landlords asking for unreasonably expensive leases to the square footage being too large for the needs of local merchants. The city also has strict rules on where chain stores can locate in the Castro and prohibits office-like uses in ground-floor storefronts.

Community leaders have tried various tactics to address the issue, from marketing the Castro to leasing agents to assisting entrepreneurs in opening their doors. A retail corridor study was conducted a few years ago to determine what businesses residents would like to see open in the neighborhood.

Landlords with a vacant commercial space are required to register it with the city's Department of Building Inspection within 30 days of it becoming empty and pay a fee of $711. Until they lease the space, landlords are supposed to pay the fee each year.

There is a legislative effort at City Hall to possibly increase the fee for landlords who fail to lease their storefronts. And there also have been calls for better enforcement on the city's part to ensure landlords are registering when they have vacant storefronts.

Landlords could face even stiffer penalties following the outcome of the special mayoral election on the June 5 primary ballot. The leading candidates in the race are all on record in support of seeing San Francisco institute a commercial vacancy tax on owners of property with empty retail spaces.

Former state lawmaker Mark Leno, who lives in Noe Valley and represented the neighborhood at City Hall when he served as the District 8 supervisor, has called for such a tax. He has not yet determined, however, what it would cost or what the stipulations would be for when the tax would kick in.

"It is painful but a curiosity that the laws of market demand don't seem to be working here. We have all of this new residential development, especially on upper Market from Octavia to Castro. The city requires ground floor retail for all sorts of good planning purposes," said Leno. "We have a glut now of commercial space available, both all the newly constructed and the existing vacancies. You would think prices would begin to fall, and they are not."

With the current fee landlords pay not being a large enough disincentive to keep retail spaces vacant, Leno said a vacancy tax could be the answer to push them into lowering lease prices to attract tenants.

"I have had long conversations with the merchant association, and what I am hearing from them, and not just in our neighborhood but also around town, is oftentimes when we are dealing with out of town property owners, out of town landlords for commercial space - they could be pension funds, they could be insurance corporations and their investment pool money - they have very little inclination or apparently incentive to negotiate with entrepreneurs and potential small business owners to offer a rent that is affordable," said Leno. "Different with local property owners, who do seem to be more willing and interested in negotiating a price that is affordable. So, there is some hope there if we put appropriate incentives in place."

District 6 Supervisor Jane Kim, who lives in South of Market, has also spoken out in favor of instituting a retail vacancy tax. But she too has not determined exactly how it would work, as she pointed out that during a downturn in the economy, landlords may have difficulty leasing out storefronts even when they are actively trying to do so.

"I talk to landlords all the time who are waiting for that Chase bank to come along and be that cash cow for them, or the Walgreens, or CVS. And that I want to figure out a disincentive to, however, we also don't want to burden small property owners who truly are trying to find a tenant, but either because of economic cycles or whatnot are not able to," said Kim. "So that's been the holdup to that issue, but I absolutely support the concept of a vacancy tax."

District 5 Supervisor London Breed, currently the board president and a resident of the Lower Haight, has also suggested a retail vacancy tax is needed. She would also like to see better enforcement on the city's part of the vacant storefront database to ensure landlords are registering and paying the fee.

"I will be open to exploring opportunities to try and address what is happening in certain neighborhoods in our city for the purposes of getting landlords to rent their properties to people, or to at least treat their current tenants better and not try to raise their rent by a ridiculous amount of money in order to get them out for the next tenant," said Breed, who briefly served as acting mayor following the sudden death of the late mayor Ed Lee December 12 due to a heart attack. "We've got to do something different, and so I am open to that for sure."

Former supervisor Angela Alioto has long championed the idea of imposing a tax on property owners with vacant retail spaces. North Beach, the city's Little Italy neighborhood near where she has her law office, "is devastated" due to all of the empty storefronts.

"I think that we need to start taxing them at six months for keeping it vacant at a percentage that would give them an incentive to rent it," said Alioto, who lives in Pacific Heights. "I think six months might be a long time, but again, this is something we would just be trying."

Should she become mayor, Alioto would convene local financial experts to figure out how to make the vacancy tax "painful" enough to make landlords act, especially those who live out of town.

"If it's not painful, it doesn't matter, right? I mean, you're not going to get altruistic landlords that live in New York City and own the building here unless it's painful to their pocket," contended Alioto.

Zoning rules could change
Apart from instituting a vacancy tax, which would need voter approval, the next mayor could order the city's planning department to propose zoning rule changes to make it easier for chain stores or other uses to move into vacant retail spaces. They could also examine if the city should scrap requiring new developments all have sidewalk-fronting storefronts.

Leno told the B.A.R. that is a conversation that should be had with community leaders. He said the city could find ways to allow for community serving uses of such spaces by helping to subsidize rents for arts organizations and nonprofits, many of which are being priced out of the city.

Kim also voiced support for seeing the city allow other, community-oriented uses in the vacant storefronts. But she was quick to add she would not allow for office uses in the new buildings along upper Market Street.

"Yeah, so I've heard that same complaint actually from developers that we have now required too much ground floor retail, with all of our new development and existing development, and simply just pure supply and demand cannot fill all this ground floor retail space," she said. "I think that nonprofits, particularly ones that are community serving so you'll still get that activity on the ground. That was the thinking and principle in the planning department in requiring some type of ground floor occupation, but it does not have to be retail to activate ground floor spaces."

Breed told the B.A.R. she is also open to making changes to the zoning requirements for new mixed-use developments.

"But again, the decisions I make as a member of the board and as mayor, I would prefer to use data to inform those decisions," said Breed.

When she sees some of the newer empty storefronts, Breed allowed she at times thinks they are a wasted opportunity.

Alioto also expressed support for easing up the zoning laws but would not want to scrap the ground-floor storefront requirement altogether.

"We could also rezone some of the areas and make them single dwellings, single residency dwellings, depending upon the area and the length that the commercial business is," she said, adding, "But with percentages. This is not takeover the neighborhoods, OK."