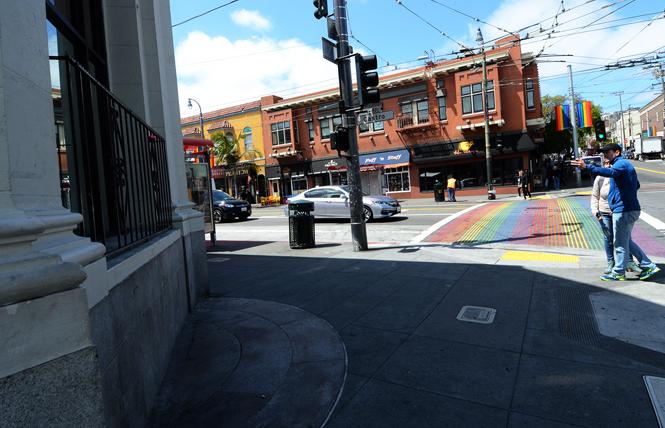 Visitors snap a selfie of themselves and the iconic intersection of 18th and Castro streets, with the site of community altars on the right and Harvey's (nee Elephant Walk) bar in the background center. Photo: Rick Gerharter

"The Castro has been the heart of the LGBTQ community for decades, and the Castro LGBTQ Cultural District will enable us to preserve our history and continue building our community in the neighborhood," Sheehy, the board's lone gay member, said in a news release. "The Castro is a haven for our community and is a beacon of hope around the world."

Terry Beswick, executive director of the GLBT Historical Society, strongly supports the cultural district. He thanked Sheehy, Ronen, and Supervisor Jane Kim for their efforts on creating cultural districts. Kim's office is involved in the South of Market LGBTQ and Leather Cultural District and the TLGB district in the Tenderloin.

"The Castro has truly been a beacon of LGBTQ culture and history recognized around the world," Beswick stated in the news release, "and this measure will help keep the gayborhood going the way of the Polk, Tenderloin, and other neighborhoods that have largely lost their queer identity and businesses."

Sheehy's office said that community forums will be organized over the coming months by the Castro Cultural District Working Group to help lay the groundwork for the mission and purpose of the subsequent nonprofit whose goals will be preserving, sustaining, and promoting the LGBTQ history and culture of the neighborhood. This will include highlighting structures and sites important to LGBTQ history; fostering racial, ethnic, and cultural diversity among resident and businesses; and creating a safe, beautiful, and inclusive space for LGBTQ and allied communities.

Meeting dates will be announced soon.

Supes OK SOMA district
The San Francisco Board of Supervisors unanimously approved the creation of a South of Market LGBTQ Leather Cultural District Tuesday, May 1.

District 6 Supervisor Jane Kim, who represents the area, said that the city should make sure that it's a "living, breathing" cultural district that supports businesses, the leather community, and provides housing and social services.

The district would run from Division to 7th streets, from Howard to Harrison streets, and along Harrison from 7th to 5th streets.

Give OUT Day sets record
The recent Give OUT Day, a national LGBTQ day of giving, enjoyed record-breaking success, with more than $932,000 raised for over 400 participating nonprofits in all 50 states and the District of Columbia, according to Horizons Foundation, which administers the program.

Organizers had hoped to top $1 million, but the $932,000 raised was the most in the six Give OUT Days that have been held.

Additionally, Give OUT Day, which was held April 19, broke its previous record for number of donations made in 24 hours: 12,500.

"In these days of challenges on many fronts, it is encouraging to see Give OUT Day demonstrate the power of our communities rallying around so many important organizations," Horizons President Roger Doughty stated. "By raising our voices together, we did not simply retain much-needed funding for participants, we created a national conversation about those who serve the diverse needs of our communities."

In addition to the funds raised by individuals, Horizons, with support from other foundation partners, awarded leaderboard prizes worth nearly $130,000. Prizes were given to organizations that raised funds from the greatest number of individual donors in multiple categories. This year, new categories focused on nonprofits that specifically serve women, people of color, bisexuals, and transgender people. Other leaderboards were based on organizational size and geographic location.

The nonbinding resolution, authored by gay state Senator Scott Wiener (D-San Francisco), was passed by the Senate Committee on Health last month on a bipartisan vote of 7-2.

"We are in solidarity with the lives and lived experiences of Intersex communities and acknowledge the pain Intersex people have experienced in enduring irreversible, invasive surgeries as newborns and infants," said Sheryl Davis, executive director of HRC, in a news release.

HRC, a charter commission of the City and County of San Francisco that works for equality and human rights, has long been fighting to protect the intersex community. It published a 200-page report in 2005 that called for an end to normalizing surgeries. The report highlighted findings that unnecessary surgeries are in violation of intersex infants' human rights and should be deemed unethical.

Aria Sa'id, LGBTQI+ policy adviser for HRC, in a news release called the policy "a major step in increasing accountability of health providers to ensure that medically unnecessary surgeries be ceased on Intersex communities - who have expressed grief and trauma from the outcomes of those surgeries for generations."

At an information hearing on the resolution March 2 in Sacramento, activists representing InterACT Advocates for Intersex Youth, which is sponsoring the resolution, called out UCSF for continuing to perform these surgeries.

Dr. Larry Baskin, a urology professor at UCSF, told the Bay Area Reporter in a March email that such surgeries can be performed "when medically indicated." He did not elaborate further.

The Senate Judiciary Committee was expected to vote on SCR 110 May 1. The resolution allows the Legislature to recognize the intersex surgery issue without anything actually becoming law. Wiener may come back at some point with proposed legislation.

OFC Night Out coming up
Our Family Coalition's annual Night Out benefit will be held Friday, May 11, from 6 to 9 p.m. at the InterContinental San Francisco, 888 Howard Street.

OFC officials said that the agency will also launch its new emeritus board at the gala.

Tickets are $250 and can be purchased at http://www.ourfamily.org.

The free celebration by and for queer and trans youth will feature music and entertainment, food trucks, guest speakers, photo booths, resources, and games and activities.

The festival is open to queer and trans teens, their friends, and allies.