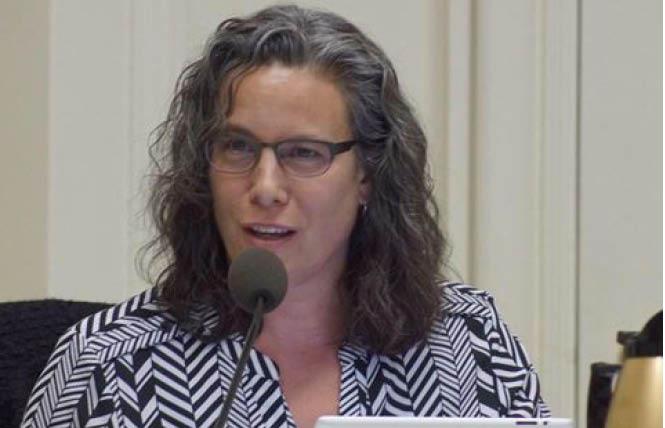 The Lambda Democratic Club of Contra Costa County has endorsed a lesbian Alameda County resident in the race for the 15th Assembly District seat.

The club members voted to back Berkeley school board member Judy Appel in her bid to represent the sprawling district that stretches from Richmond south into parts of Oakland. She is one of three out candidates vying to become the first LGBT state lawmaker from the East Bay.

"I am very honored to have received the endorsement from the Contra Costa Lambda Democratic Club," Appel, a married mother of two, told the Bay Area Reporter. "The fact that they have joined EQCA, the LGBT Legislative caucus, BAYMEC, and dozens of LGBTQ individuals in a chorus of support from the community makes me proud of the work I have done with and for LGBTQ people."

Bisexual East Bay Municipal Utility District board member Andy Katz, who also identifies as gay, has not garnered endorsements from any LGBT organizations as he runs a second time for the seat.

Lambda's endorsement vote Wednesday, April 25, means Appel garnered at least 60 percent of the votes cast. The outcome differed from that of the East Bay Stonewall Democratic Club, which co-hosted with Lambda a candidate forum on the race in February. No candidate was able to secure Stonewall's support.

"I am thrilled that the Lambda Democrats voted to endorse Judy Appel for AD 15," Jonathan Cook, chair of the club's political action committee, told the B.A.R. "Her demonstrated leadership, courage, and progressive political action to advance the rights and inclusion of LGBTQ people is what we need in our next East Bay representative in the Legislature."

"From early in the race I recognized Jovanka as someone who understands the need for truly bold action to lift everyone up in these challenging times," he stated. "It was no surprise to me when I learned she supports universal basic income, a groundbreaking policy that would bring us toward a California that truly reflects our progressive values."

The organization devoted to electing LGBT candidates nationwide announced its endorsement of Rivera last Monday, April 23, along with that of 34 other out candidates running this year.

After not facing an opponent four years ago, Rivera is being challenged this year by scientist and entrepreneur Abdur Sikder, a father of three who is from Bangladesh and lives in Berkeley. The founder of a computer software company based in the East Bay city, he lost a bid two years ago for a seat on the Berkeley school board.

Rivera, who secured an early endorsement from the Stonewall Democratic Club, is one of the highest-ranking non-judicial LGBT elected officials in the East Bay. He first ran in 2010 for the education board's Area 1 seat, which includes the cities of Albany, Berkeley, and Emeryville, as well as the Oakland neighborhoods of North Oakland, Temescal, Rockridge, and the northern portion of West Oakland.

Rivera was the first, and so far only, out LGBT person to serve on the oversight body. A chemistry professor since 1990 at Skyline College, located south of San Francisco in the hills of San Bruno and part of the San Mateo County Community College District, Rivera lives in Berkeley with his husband, Joel Cohen. The couple does not have children.

In early April Councilwoman Annie Campbell Washington announced she would not seek re-election, citing the "toxic" tone at City Hall as the reason why. Mayor Libby Schaaf, who had held the District 4 council seat, laid the blame for the dysfunction on Councilwoman Desley Brooks, who is up for re-election in the fall.

Harris, who identifies as lesbian and bisexual, is a local community activist, nonprofit professional, and documentary filmmaker. She lives in a multigenerational, bilingual home with her two children, her mother, and her wife, the novelist and San Francisco State University professor Carolina De Robertis.

"I'm deeply pleased to join the race for a seat on the City Council," stated Harris in announcing her candidacy Friday. "Oakland is an extraordinary city that I am proud and honored to call home. As the daughter of civil rights activists, I have always believed in the power of communities to effect the change they need to see."

Should she be elected, Harris would be the first out African-American to serve on the Oakland City Council and only the fourth out council member. She would join lesbian at-large Councilwoman Rebecca Kaplan at City Hall and District 2 Councilman Abel Guillen, who identifies as two spirit and dates both men and women, if he wins his re-election bid in November.

"I am ready to work with labor, community groups, department heads, elected officials, and Oakland residents to help ensure equity, dignity, and compassion for all," stated Harris. "In the meantime, I look forward to knocking on many doors and listening to my neighbors' vision for a better Oakland."

The District 4 seat covers the Oakland Hills neighborhoods off Highway 13. Several other candidates had already entered the race and more are expected to do so ahead of the filing deadline later this summer due to the incumbent's decision to drop out.