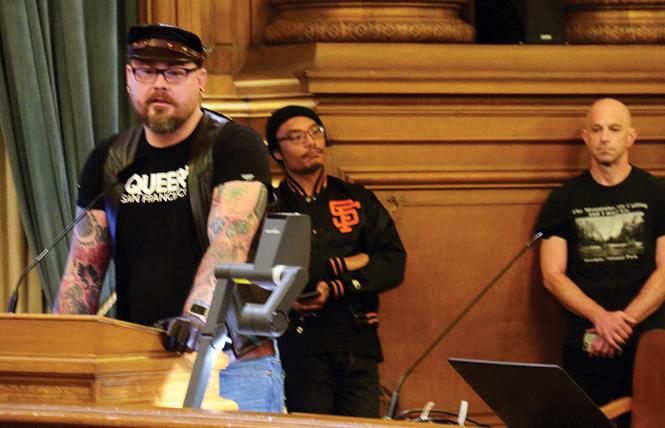 People, including Geoff Millard, at podium, line up to speak to the Land Use Committee of the San Francisco Board of Supervisors in support of creating an LGBTQ and Leather Cultural District in the South of Market area. Photo: Rick Gerharter

The supervisors' Land Use Committee voted Monday to move a plan to establish an LGBTQ and Leather Cultural District in South of Market forward to the full board for approval.

Next week, gay District 8 Supervisor Jeff Sheehy is expected to introduce a resolution to establish a Castro cultural district that would be included in Supervisor Hillary Ronen's larger historic district legislation.

Around 45 people from the leather community attended the land use panel's meeting Monday, April 23. Speakers noted that SOMA was once home to a thriving leather community, including businesses and bars.

The proposed LGBTQ and Leather Cultural District would run from Division to 7th streets, from Howard to Harrison streets, and along Harrison from 7th to 5th streets.

"San Francisco's SOMA district has been the center of gay leather culture for over 50 years," Jonathan Schroder, general manager of Mr. S. Leather told the Bay Area Reporter. "But the area is changing fast. So fast that it's hard to say what SOMA will look like in another five years. The leather district is essential to making sure our culture isn't swept away as San Francisco rapidly transforms itself once again."

The Land Use Committee hearing followed a meeting last week of the Leather and LGBT Cultural District Community Group, which has been working toward making the cultural district a reality. According to Chair Bob Goldfarb, the group's goals include revitalizing the area and bringing back leather and LGBTQ businesses. Goldfarb noted that, at its peak, the neighborhood was served by more than 30 businesses catering to the leather community.

"That number is much smaller now," he said.

The group is also interested in making sure there is affordable housing in the area and will be asking future developments in the neighborhood to designate more apartments as affordable units.

"One of the things that happen in a cultural district is that new developments come in and displace residents," Goldfarb said. "They also tend to increase the density and cost levels of new housing. We're trying to mitigate the effects of the upscaling brought on by these developments."

It was noted that one developer, Hanover, had offered the community group $150,000. In return for this the developer wanted members of the group to attend an April 26 planning commission hearing and support its efforts to construct a new building at 1140 Harrison Street.

"We had a discussion with them about the effects of their development on the neighborhood and this was their response," said Goldfarb.

The third goal of the community group is to set up public installations, such as bronze prints and standing stones, along the lines of the Leather History Walk on Ringold Alley. These would commemorate businesses and people who are now gone.

It was noted that one developer has agreed to include in their leases an acknowledgement that tenants are moving into a cultural district that has a long history of leather events and nightlife.
"We want them to know that our events are not like the Union Street Fair," Goldfarb said. "We want them to be informed."

Attendees of the community group meeting were in favor of this, as well as the proposal to pressure developers to create more affordable housing.

Gay housing advocate Brian Basinger, executive director of the Q Foundation, urged attendees at the meeting to remain actively engaged in all efforts to establish the leather and other LGBTQ cultural districts.

"Q Foundation threw the first brick that led to the creation of Compton's TLGB district by filing the appeal to demolish the historic gay bars on the 900 block of Market Street," Basinger said. "We were able to instigate, inspire, and organize others to join our call for LGBTQ controlled spaces. The strategy was a three-pronged approach: Compton's, SOMA, and the Castro. Building community is about showing up for one another so it is natural for the Q Foundation to show up to support the SOMA Leather District."

Goldfarb said that he was confident the full board would approve the establishment of the leather cultural district.