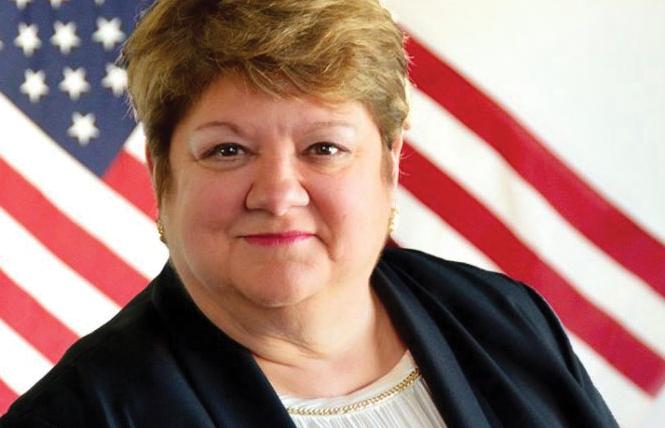 A health executive and retired nurse is mounting an underdog campaign in California's southeastern desert region to become the first lesbian from the Golden State to serve in Congress.

Marge Doyle is vying to oust entrenched Representative Paul Cook (R-Yucca Valley) from his 8th Congressional District seat he has held since 2013. At first glance, her bid sounds improbable.

Republicans outnumber Democrats in registered voters in the district by nearly 10 percent, and the conservative region voted for President Donald Trump by a double-digit margin in the 2016 election. This year, Cook is also facing a challenge on the right from former GOP state Assemblyman Tim Donnelly of Twin Peaks.

She is aiming to ride an expected blue wave of anger against national Republicans this year to victory and help return control of the House to Democrats. In what could be a good omen, prior to the 2012 redistricting of House seats, House Minority Leader Nancy Pelosi (D-San Francisco) had held the state's 8th Congressional District. (She now represents the 12th District.)

"We are going in the right direction, but it is still a red district, and I know that very well," Doyle, 61, told the Bay Area Reporter in a recent phone interview. "My focus is really local issues and taking care of and listening to my constituents, which the current quote-unquote representative does not do."

She has experience running for public office. Upset with the poor management of a local hospital facing closure, Doyle in 2014 won a seat on the Morongo Basin Healthcare District and served as its president, helping to keep the medical facility open. She currently is director of operations and clinical services for Pamorris Healthcare Solutions, which helps private medical clinics provide services to HIV-positive clients.

It was Cook's vote to repeal the Affordable Care Act last year, after ignoring her advice against doing so, that prompted Doyle to run against him.

"I told him, 'Paul, I am really mad about that vote.' He told me, 'It doesn't matter. The Senate will fix it.' And it absolutely does matter," said Doyle, as there was no guarantee that the Senate would fail to overturn President Barack Obama's legislative achievement.

A native Californian who grew up in the Los Angeles area, Doyle and her wife, Wendy Cohen, a real estate broker, have lived in Joshua Tree since 2005. The former Palm Springs residents married in 2004 in San Francisco during the city's "Winter of Love" and had a church service in April of that year.

Due to their civil marriage being annulled by the courts, they married again in 2008 during the brief window when same-sex couples could do so that year. While she doesn't mention her spouse on her campaign site, Doyle does promote her endorsements from LGBT groups Equality California and Run With Pride.

"I have been out since we moved up into the high dessert. When it comes up, I am of course honest," said Doyle.

She does highlight her Christian faith, proclaiming on her website, "As a Christian, I consider myself a child of God and believe that we all are," adding that, "If we are all equal before God, then we must treat each other with dignity and respect regardless of race, gender identity, sexual preference, religion, or country of origin."

Doyle is a former president of the Seventh Day Adventist Kinship, a support group for LGBT members of the faith, and now belongs to a local Metropolitan Community Church.

"For me, my faith is important and it is the root of how I come at social justice and other sorts of things in my political life. It is important to me because it is just basically at my core," she said. "It is a difficult issue for LGBTQ folks, and I wanted to make a statement that you can be both."

Faith, Doyle noted, is important to many people in the district.

"I just wanted people to know who I am as a whole person. Yes, I am lesbian. Yes, I am married. Yes, I have been a nurse. Yes, all these things are true about me," said Doyle. "I am not just one of those things. I am a whole integrated human being who cares about the outcome of various issues for people of my district."

Another topic Doyle doesn't shy away from is gun control. While she backs the right to own guns under the Second Amendment, Doyle has called for banning the sale of assault weapons and allowing for federal research into gun violence in order to prevent people from being slaughtered in mass shooting attacks.

"I support peoples' rights to bear arms; I am not going to take their firearms away," said Doyle. "We have the right to bear arms but also the right to life, liberty, and the pursuit of happiness. When those intersect, we have to make judgments on how to uphold both of those."

With a number of military bases and installations in the district, Doyle has also been vocal on calling for better treatment of enlisted officers, their families, and veterans. She is on record opposing Trump's move to ban transgender people from serving.

And she told the B.A.R. she would be a strong backer of passing federal protections to end discrimination in all areas against LGBT people.

"I do support including LGBT folks in the protected classes," she said.

To date, California has had only one out member of Congress, gay Democrat Mark Takano from Riverside. He is expected to easily win re-election this fall to his 41st Congressional District seat.

In the 25th Congressional District seat north of Los Angeles, queer geologist Jess Phoenix and bisexual homeless advocate Katie Hill are among the Democrats running to defeat Representative Steve Knight (R-Lancaster). Hill is seen as having a good shot of surviving the June primary, where the top two vote-getters regardless of party affiliation will advance to the November general election.

Doyle's game plan to win her race is to travel throughout the sprawling district, registering voters, especially younger people, along the way. She believes her practical, no-nonsense style will serve the district well.

"I am not radical. I am just let's get it done," said Doyle. "I am not interested in fighting people or polarized dogma and rhetoric. I am interested in helping my community, and that is the most important thing."

SF supe candidate courts 'swing' vote
A pro-development candidate running for a seat on the Board of Supervisors this fall is courting San Francisco's "swing" voters, i.e. residents who are polyamorous.

Sonja Trauss, a co-founder of SF YIMBY, for Yes in My Backyard, and the San Francisco Bay Area Renters' Federation, is seeking the District 6 seat that includes South of Market and the Tenderloin. The moderate is facing off against progressive school board member Matt Haney and former planning commissioner Christine Johnson in November to succeed Supervisor Jane Kim, who is termed out of office this year and running in the June mayoral special election.

Trauss is co-hosting a public forum next week aimed at clarifying the political and legislative needs of the city's sex positive and polyamorous communities. While she doesn't use the term polyamorous to refer to herself, Trauss is in a non-monogamous marriage. She is working with leaders within those communities, as well as the leather community, to create a legislative agenda she can carry at City Hall should she be elected.

It will take place from 8 to 11 p.m. Wednesday, May 2, at the community motorcycle garage Piston and Chain, located at 1285 Folsom Street in SOMA.