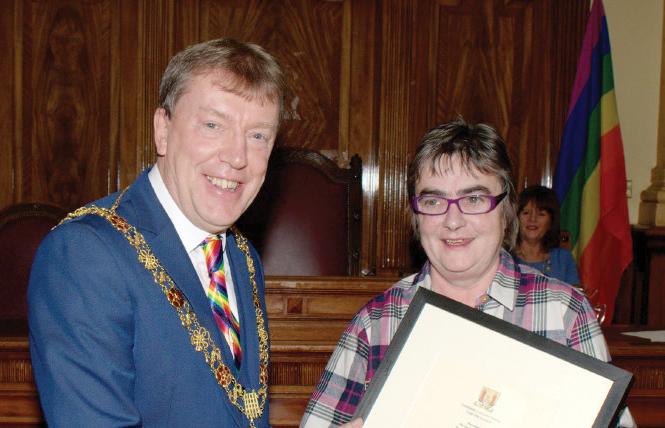 San Francisco and Cork, Ireland will take a joint stand for LGBT rights next week by seeking to be the first cities in their countries to join a global network of municipalities committed to protecting the rights of their LGBT citizens.

Sister cities since 1984, San Francisco and Cork aim to become the first American and Irish cities to belong to the Rainbow Cities Network. Begun in 2011 by founding members Amsterdam, Barcelona, Cologne, and Turin, the network as of last fall had grown to include 27 members from 15 countries, mainly in Europe but also Mexico, Brazil, and Turkey.

The network members share best practices with each other on how to protect LGBT rights as well as promote and develop their local LGBT communities. It meets once a year in a different member city.

A sister city delegation led by Tony Fitzgerald, the Lord Mayor of Cork, will be in San Francisco next week for the signing of the memorandum of understanding for the two cities to become official members of the Rainbow Cities Network. San Francisco Mayor Mark Farrell will host a signing ceremony at City Hall Monday morning.

"San Francisco has a long and storied history of supporting our LGBTQ community, and we are proud to share these values with our Sister City Cork. By exchanging our best practices, we can find innovative new measures to advance the needs of our LGBTQ residents," said Farrell in a statement to the Bay Area Reporter. "While our federal government wants to close doors to the world, San Francisco is embracing other cultures and nations with open arms. We are fortunate to have such an open and responsive sister city in Cork, and we look forward to working together on the crucial issues facing our LGBTQ community."

Siobhán O'Dowd, a lesbian who chairs Cork's LGBT Inter-Agency Group, told the B.A.R. via email that "the memorandum of understanding, which will be signed during our visit to San Francisco, strengthens the existing links and connections between our twin cities."

The Irish delegation coming for the visit numbers nearly 60 people. Among the community and business leaders will be Ann Doherty, the chief executive of the Cork City Council; Paul Moynihan, the council's director of services and corporate affairs; and Kate Moynihan, the LGBT Inter-Agency Group's secretary and coordinator of LINC, short for Lesbians in Cork. (They are not related.)

"Generally, when there is a formal signing of a memorandum between cities, the Lord Mayor represents the whole city and signs on our behalf," noted O'Dowd. "So it is really significant that the LGBT Inter-Agency will also be a signatory to this agreement, but that signature will represent a broad coalition across the city."

It is estimated that 12,500 LGBT people live in Cork, which is Ireland's second largest city. O'Dowd told the B.A.R. it has "a number of established and reputable LGBT community groups, social spaces and is increasingly seen as an inclusive and welcoming city for LGBT community members."

Back in 2002, when Ireland's government required all municipalities to produce development plans for their regions, Cork was the only city to include specific mention of its LGBT community in its plan, noted O'Dowd. The city then formed the LGBT Inter-Agency Group, which is comprised of representatives from both city agencies and community groups, to implement it. O'Dowd represents the Cork Equal and Sustainable Communities Alliance on the group.

"The LGBT Inter-Agency Group in Cork City is a coalition from across the city not an LGBT organization. It is unique to Cork City, as other areas have more generic social inclusion or equality committees," explained O'Dowd.

Some of the actions it has taken include holding various events to celebrate the LGBT community and to combat transphobia and homophobia. After San Francisco gifted a rainbow flag to Cork in 2013, O'Dowd noted that Cork "became the first city on the island of Ireland to formally fly the rainbow flag from a civic or public building in 2014."

The decision for both Cork and San Francisco to jointly pursue membership in the Rainbow Cities Network came out of the visit last fall by a San Francisco sister city delegation led by the late mayor Ed Lee. It was Lee's last international trip before his sudden death December 12 due to a heart attack.

"Having a non-gay mayor who is so encouraging and celebratory of LGBTQ rights was just something very special. It was just a wonderful trip," recalled David Perry, who owns his own public relations firm in San Francisco and was joined by his husband, Alfredo Casuso, on the trip to Ireland.

Perry had contacted O'Dowd and Cork city officials as soon as he learned about Lee's death.

"Even before dawn had dawned in San Francisco, the flag was at half mast over Cork City Hall," recalled Perry, who was in Spain at the time.

Jim Herlihy, former chair of the SF/Cork Sister City Committee, had invited Perry and Casuso to join the delegation last fall as the spouses are interested in expanding their business connections throughout Europe. Casuso is a dual citizen of Spain, where he was born, and the U.S., while Perry is a U.S. citizen with residency status in Spain due to being married to his husband.

"This came as a serendipitous opportunity," recalled Perry, adding that Matthew Goudeau, the deputy chief of protocol in the mayor's office, "had mentioned that becoming rainbow cities had been talked about but had not been pushed forward. He asked us to meet with the LGBT group in Cork to see how we could move it along."

When they looked at the requirements to be considered for membership in the Rainbow Cities Network, both Cork and San Francisco were already meeting all the necessary stipulations, said Perry.

Web Extra: For more queer political news, be sure to check http://www.ebar.com Monday mornings at noon for Political Notes, the notebook's online companion. This week's column looked at which candidates LGBT leaders are backing in a Santa Clara County supervisor race.