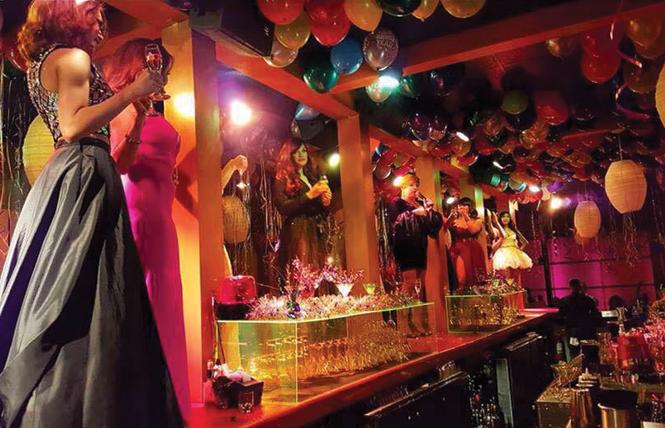 AsiaSF was decked out in balloons for its 2017 New Year's Eve party. Photo: Courtesy AsiaSF

Twenty years ago business partners Larry Hashbarger and Skip Young took a chance on opening a restaurant featuring transgender cabaret performers who doubled as waitresses at a corner space on Ninth Street in San Francisco's South of Market neighborhood.

Today, the area outside AsiaSF's doors has undergone a massive transformation fueled by the expansion of Silicon Valley into the heart of the city. Mere blocks away from the venue are offices for tech industry titans Twitter, Uber, and LinkedIn.

New housing developments for workers and college students have gone up, with a condo project set to break ground across the street from AsiaSF on a former gas station that had been a parking lot when the entertainment spot first opened the night of Friday, April 17, 1998.

"The neighborhood tended to be more transient back in those days. Now it is full of young techies," noted Hashbarger, 66, who is the chairman and CEO of AsiaSF. "Like the whole city of San Francisco, it has changed dramatically in 20 years."

When he first walked into the multi-level space - a downstairs lounge doubles as a nightclub on weekends - Hashbarger sensed it would prove to be the ideal location for the business, which was inspired by a dance party he and Young promoted known as Club Asia.

"I just knew it. That building is 110 years old. It was the first building built in SOMA after the 1906 earthquake," said Hashbarger, who for 35 years worked as the director of special productions for Macy's and oversaw its annual Passport fashion show that raised money for AIDS causes. "It has quite an illustrious history."

With two decades under its belt, and more than one million customers coming through the doors, AsiaSF is undergoing a transformation of its own. Gone are the Chinese lanterns and bamboo décor for a more modern aesthetic that will be rolled out in the coming weeks.

An all new LED light and sound system has been installed. It will debut Tuesday, April 17, when AsiaSF throws an invite-only party to mark its 20th anniversary.

"For me, this celebration is not just acknowledging and recognizing 20 years in business. More importantly, it is looking to the future and what is the next 20 years of AsiaSF going to be," said Hashbarger. "We want to continue to build these connections with people through what we do and continue to support the transgender community."

Tita Aida, who has worked as a performer at AsiaSF since 2000, said the secret to its success is very simple.

"The whole idea of a restaurant that offers good food and a unique form of entertainment by the transgender community is, I think, the formula for AsiaSF going this long," she said.

Since its opening, the venue has hired between 50 and 60 transgender women - Hashbarger said he has lost count - to be the "Ladies of AsiaSF," with two of the original employees, Trina and Vivica, still performing several nights a month.

"The exciting thing for me is we have three new girls we just hired," noted Hashbarger. "It is a very involved audition process, much like 'American Idol.' We do call backs, and then those that are selected are brought in as part of the AsiaSF family."

For the 20th anniversary, AsiaSF and its dinner show choreographer, Ronnie Reddick, have put together a brand new set. The trio of new performers will help debut the retooled show at next week's party.

"We are always adding new numbers," said Hashbarger, a gay man who has dressed up in drag on Halloween but has never performed at AsiaSF.

The venue's performers, originally described as "gender illusionists," are not drag queens, noted Hashbarger. They are all transgender women, a number of whom were featured over the two seasons of the reality show "Transcendent" that originally ran on Fuse TV. It took seven years of shopping the pilot around Hollywood before Fuse executives bought the show, recalled Hashbarger.

While one of the cable channel's highest rated programs, it was canceled after two seasons. But a whole new audience has been finding it via reruns on the subscription service Hulu and making their way to AsiaSF. The restaurant, one of the first to feature Cal-Asian fusion cuisine, draws both national and international tourists. Many say it is on their bucket list of things to do in town, said Hashbarger, along with seeing the Golden Gate Bridge and the long-running musical revue "Steve Silver's Beach Blanket Babylon."

"More people have seen the show on Hulu than ever did on Fuse. We have people come in all the time and tell us they can't wait for season three," he said.

As of now there are no plans for a third season, though that could change if AsiaSF opens a second location in Palm Springs. Hashbarger told the Bay Area Reporter this week that the co-owners - along with him and Young, longtime employee Aaron Nelson bought an ownership stake in 2010 and is now president and COO - are close to finalizing a deal for a space in a new building in the gay desert mecca.

If they do, Hashbarger believes opening the new AsiaSF would provide great material for a revival of "Transcendent."

"Palm Springs is having such a renaissance," he noted. "We've done a ton of research over the last year to make sure it is the right market for us."

Having taken a leap in opening a restaurant that celebrates "human diversity" and transgender women, long before transgender rights had gained mainstream attention, Hashbarger still marvels that AsiaSF was embraced from the day it opened and has remained a success.

"We are still so blessed," he said.

AsiaSF is open Wednesday through Sunday. The first dinner show on most nights is at 7:15 p.m. (5 p.m. Saturday) and welcomes those under 21. Later shows are for patrons 21 and over. Prices vary based on the time and day of show and size of the party.

For more information about AsiaSF, or to make a reservation online, visit https://asiasf.com/. 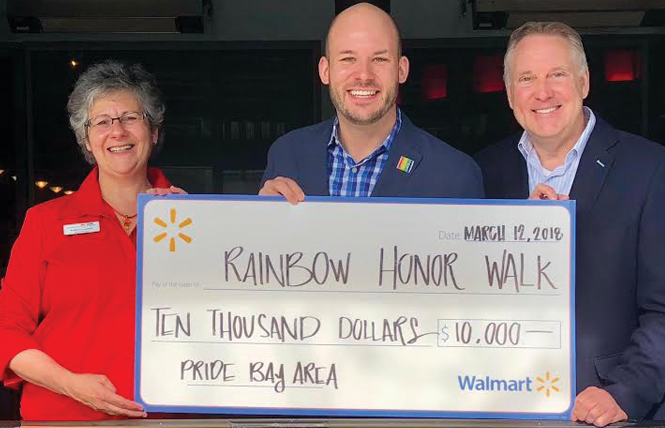 Honor Roll
After taking part in a history tour of San Francisco's gay Castro district, a Walmart employee arranged for the company to donate $10,000 toward the Rainbow Honor Walk. The project has been honoring deceased LGBT luminaries with bronze plaques embedded in the sidewalks of the gayborhood.

Nathan Allen, co-chair of the Walmart PRIDE Associate Resource Group, had signed up for one of the Castro Walking Tours given by owner Kathy Amendola. As part of the tour, Amendola discussed the honor walk project, on whose board she sits.

Impressed by the project's scope and impact, Allen convinced the giant chain retailer to financially support it and presented honor walk leaders with a check in early March. In addition to overseeing the LGBT employee group, Allen is the senior manager for corporate communications at Walmart's Global eCommerce division based in San Bruno.

"This is such a fantastic organization, in how it's honoring notable LGBT community members throughout history with sidewalk plaques in our beloved Castro neighborhood," stated Allen. "Our company and our PRIDE [Associate Resource Group] are committed to giving back to the communities we serve, and we couldn't be happier to support the work of the Rainbow Honor Walk."

Since 2014 the honor walk has seen 28 plaques be installed along the 400 and 500 blocks of Castro Street, a portion of 19th Street, and the 2300 block of Market Street. Last November saw the installation of the newest plaques, including those for gay Iranian poet Fereydoun Farakzhad, lesbian lawmaker Barbara Jordan, and gay Japanese-American civil rights activist Kiyoshi Kuromiya.

Eventually, promoters of the project would like to see it extend north along Market Street to Octavia Boulevard, where the LGBT community center is located.

The next 16 plaques are slated to debut this June during Pride month if the honor walk board raises another $70,000. Each 3 foot by 3 foot bronze plaque costs $7,000 to produce. For more information about the Rainbow Honor Walk, as well as a list of all of the honorees, visit http://www.rainbowhonorwalk.org.