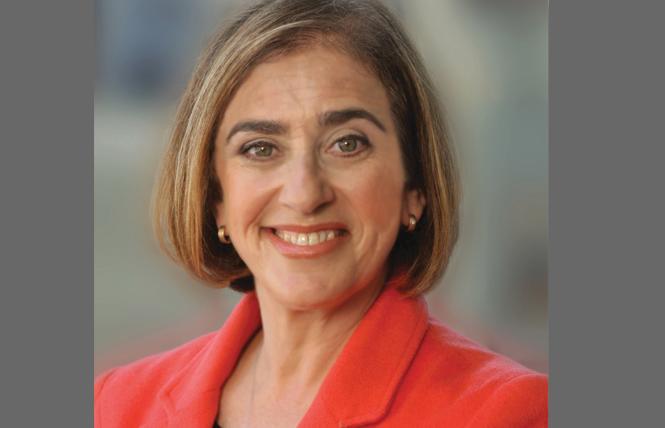 San Francisco Mayor Mark Farrell last week decided not to re-nominate a qualified lesbian commissioner. We don't know the reason why Leslie Katz, a former supervisor and LGBT community leader for more than two decades, was summarily dismissed from the Port Commission, but we think the mayor has missed an opportunity to keep a valued LGBT leader on a city commission.

According to news reports, the mayor wanted Assessor-Recorder Carmen Chu on the San Francisco Retirement System board, and to do that he needed to remove someone. That person was Victor Makras, who was named to a vacancy on the Port Commission. But then, Farrell also named Gail Gilman, CEO of Community Housing Partnership, to the Port Commission seat held by Katz. We asked the mayor for a comment when the story broke last week and received a one-sentence reply that thanked Katz for her service to the city. Gilman already serves on the Department of Building Inspection Commission.

From what we know, Katz, who served on the panel for seven years, was an active member of the commission. She and fellow Oakland Port Commissioner Michael Colbruno started an affinity group for LGBT port commissioners and management staff. There aren't many out LGBTs involved with the state's various ports - the maritime industry is not known as being particularly LGBT-friendly - and now there is one less, with Katz's term set to expire next month.

While the Port of San Francisco is overseen by Executive Director Elaine Forbes, a lesbian, Katz was the only LGBT commissioner.

According to a "Gender Analysis of San Francisco Commissions and Boards" that was published in December by the San Francisco Commission on the Status of Women, it's estimated that between 4.6 and 7 percent of the city's population is LGBT. Data on sexual orientation and gender identity was available for 240 commissioners and 132 board appointees. Overall, about 17 percent of appointees to commissions and boards are LGBT, which is good. However, it would be troubling indeed if Farrell continues replacing LGBT commissioners. The community has worked hard to recruit qualified candidates for years, and now that we're well represented, we must be vigilant to backsliding.

Katz has served the city with distinction over the years. She was a leading supporter of then-supervisor Tom Ammiano's groundbreaking equal benefits ordinance. When the city reverted to district elections in 2000 and Katz learned she would have to run against Ammiano or move to another district, she announced she would not seek another term on the Board of Supervisors. She left the board when her term ended in 2001 and was the last out lesbian on it.

The Board of Supervisors' rules committee was set to vote on the new appointments Wednesday, but delayed Gilman's nomination for two weeks. But no matter what the committee does - table the nominees or refer them to the full board - Gilman still needs the votes of at least six supervisors to be confirmed to the Port Commission seat. We urge Gilman to withdraw her name and for the mayor to re-nominate Katz for another term.

Gay former supervisors David Campos and Bevan Dufty sent a letter to the rules committee, urging that Katz not be replaced as a member of the commission and that the matter be tabled until a new mayor takes office after the June 5 election.

"We feel it would be very unfortunate if Leslie were removed from the Port Commission when her contribution is valued and she is able and willing to serve," Campos and Dufty wrote.

We hope Farrell's recent action is a onetime occurrence. As mayor, he has the power to nominate whomever he wants to serve on commissions as seats come up for appointment, but we think he made the wrong call by not re-nominating Katz.

SFPD just can't quit 'faggots'
Bias against minorities is still rife in the San Francisco Police Department, judging from Public Defender Jeff Adachi's news conference Tuesday when it was revealed that a police officer-turned-whistleblower alleged he's been the target of retaliation after reporting racial and religious discrimination by fellow officers. Included in the public defender's findings, the officer claims he witnessed another officer "repeatedly call his colleagues 'faggots' and yell the slur at a rideshare driver." Really? Now SFPD's finest are bullying drivers? (Adachi's office isn't releasing the officer's name for safety reasons.)

The numerous investigations of the department over the years - a blue ribbon panel, the U.S. Department of Justice, Adachi's office, and others - have resulted in recommendations for reform and the adoption of best practices. Yet still, about once a year, Adachi goes before the cameras with new findings of discrimination, harassment, or other wrongdoing.

As Adachi's office noted, and as we reported earlier this year, this isn't the first current or former officer to face alleged retaliation. The city of San Francisco settled a lawsuit with lesbian retired Officer Patricia Burley for $100,000. Burley claimed she was forced to retire after she blew the whistle on another gay officer's criminal conduct. In that case, former Officer Michael Evans was accused of stealing more than $16,000 from the LGBT police officers Pride Alliance when he served as treasurer. Evans eventually pleaded guilty to misdemeanor grand theft and was sentenced to community service and three years probation. He has since left the state.

According to Adachi, an African-American lieutenant, Yulanda Williams, spoke out in 2015 against bigotry in the department after being the target of racist texts sent by SFPD officers, for which the powerful San Francisco Police Officers Association denounced Williams and denied any racism in the ranks or police practices.

It's deeply disturbing that SFPD continues to have these egregious patterns of bias. For some reason, officers continue to feel free to use the slur "faggot." It's also obvious that department brass still haven't made the department more welcoming to officers of all races, ethnicities, sexual orientations, and gender identities. The San Francisco Police Commission and Chief William Scott need to get to the bottom of what's at best a few "bad apples," and at worst systemic racism in a department that polices a diverse population.