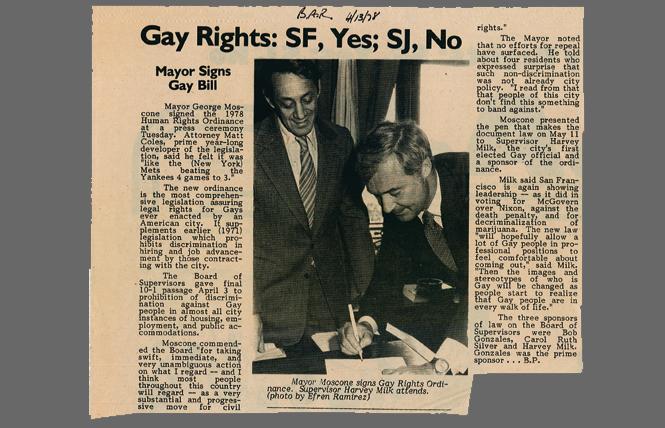 Forty years ago this week, San Francisco adopted the most sweeping gay rights protections of any city in the country. Known as the Human Rights Ordinance, it banned discrimination based on sexual orientation in employment, housing, and public accommodations in the private sector.

With the stroke of his pen at a City Hall signing ceremony April 11, 1978, then-mayor George Moscone signed the historic measure into law. The new rules went into effect 30 days later on May 11.

It was not only a significant achievement for the progressive Moscone, long a champion of the LGBT community, but also for Supervisor Harvey Milk, whose election five months prior had marked the first time a major American city had elected an openly gay person to public office. Milk had co-sponsored the gay rights measure with fellow freshman supervisor Carol Ruth Silver and supervisor Bob Gonzales, who was listed as its lead author.

"What we did in that ordinance that Harvey and I and George put together ... what we did was really quite revolutionary," recalled Silver in a recent phone interview with the Bay Area Reporter. "We got calls from all over the country from reporters saying, 'Do you realize what you have done?' We said, 'Yes, we do and we like it.'"

The board had passed the ordinance March 21 on a 10-1 vote, with supervisor Dan White the lone dissenter, and gave final approval to it April 3. Eight days later, Moscone signed it, giving the pen he used to do so to Milk to keep as a memento.

As the B.A.R. reported at the time, Moscone commended the Board of Supervisors "for taking swift, immediate, and very unambiguous action on what I regard - and I think most people throughout this country will regard - as a very substantial and progressive move for civil rights."

Milk remarked that the new law "will hopefully allow a lot of gay people in professional positions to feel comfortable about coming out. Then the images and stereotypes of who is gay will be changed as people start to realize that gay people are in every walk of life."

The city's action came less than a year after the LGBT community had suffered a stinging defeat in Miami-Dade County, Florida, where voters in June 1977 overturned a gay rights measure similar to the one San Francisco later adopted. The loss in the Sunshine State, spearheaded by Anita Bryant, led to voters in cities across the country overturning local gay rights laws at the ballot box.

According to an April 4, 1978 Associated Press article about the final passage of the San Francisco measure by the supervisors, more than 40 cities across the U.S. had adopted similar ordinances. (The press clipping is part of the George Moscone Collection housed at the University of the Pacific's Holt-Atherton Special Collections.)

Seattle had enacted laws by 1978 that banned discrimination based on sexual orientation in housing and employment but not public accommodations. (Voters there defeated an effort to repeal those protections in November 1978.)

SF one of the first
In 1972, San Francisco had been one of the first cities to pass protections for its gay residents. Elected leaders that year banned the city, and those with city contracts, from discriminating based on race, gender, religion, or sexual orientation.

Within a few years the focus had turned to providing the same protections in the private sector for the city's gay residents, then estimated to number 100,000 men and women. In 1977, having graduated from UC Hastings College of the Law that May, attorney Matthew Coles began writing the Human Rights Ordinance for the supervisors.

Seeing it adopted a year later felt like seeing "the (New York) Mets beating the Yankees four games to three," Coles, who went on to work for the American Civil Liberties Union, told the B.A.R. back then.

Coles, now on the UC Hastings faculty, said in a phone interview this week that the reason Gonzales was listed first was because he had introduced the measure in 1977 when asked to support it by Coles and other members of the city's Gay Democratic Club, which would later be named after Milk. They had asked all the supervisor candidates that year if they would support the law.

The city attorney's office gutted much of the ordinance, however, leading Milk and Silver to reintroduce it after being sworn into office in January 1978. Gonzales came on board as a co-sponsor after winning a concession that it would not apply to private employers with less than five employees.

"I think it was a big thing because it was the first real comprehensive gay civil rights bill in California," recalled Coles, noting that the ordinances other cities had passed did not cover all three areas included in the San Francisco law or have provisions to bring civil lawsuits.

A March 22, 1978 New York Times article about the supervisors' first vote in support of the ordinance quoted Milk as saying it would be "the most stringent gay rights law in the country" because it "has teeth; a person can go to court if his rights are violated once this is passed."

The story noted that White opposed the measure as an "intrusion" into the rights of businesses and private schools with "strong personal or moral reasons for not wanting to hire homosexuals." It quoted him saying, "According to the city attorney's office, if a transvestite shows up at a private school with all the qualifications for teaching, they cannot refuse to hire him for an opening even if they object to having a man dressed as a woman in their school."

Silver told the B.A.R. she believes White, who initially supported the law in committee, voted against the measure as payback for her and Milk supporting a drug program in the Excelsior section of his supervisor district, which he opposed.

"Dan White was a jerk and a murderer, but he also had a gay administrative assistant. So it wasn't that he was totally off the wall on gay rights," she said. "He probably would have voted for it."

In November 1978, White, upset with Milk and Moscone for not allowing him to rescind his decision to resign from his board seat, shot and killed both men inside City Hall. White died by suicide in October 1985.

A freedom rider active in the black civil rights movement in Mississippi, whose election to the board as a single mom made headlines in 1977, Silver told the B.A.R. that passing the gay rights law was one of her greatest achievements in life.

"I always list that when people ask me what have you accomplished in my lifetime. That is, without a doubt, one of the most important," said Silver.

Coles told the B.A.R. the San Francisco law kicked off a strategy that LGBT activists believed would lead to a statewide ban against discrimination based on sexual orientation.

"It was a huge breakthrough in California," said Coles, "in what was a tactical move to slowly, but surely, get cities all over the state to pass gay rights laws that would all be a little different from each other so, ultimately, we could get businesses on our side to have one law that covers the whole state."